A Comprehensive Guide To The U.S. TAVR Market: Looking Ahead 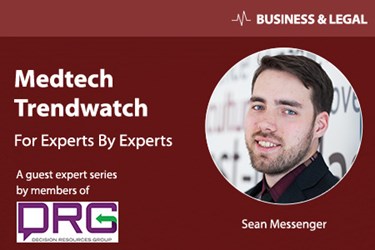 This article is the second in a two-part series examining the past, present, and future of the U.S. TAVR market. Check out part one here.

At the American College of Cardiology (ACC) annual meeting in early April this year, transcatheter aortic valve replacement (TAVR) devices were the main medical device focus. Results from the PARTNER 2A and PARTNER 2 S3i trials showed that TAVR was noninferior, and possibly superior, to surgical aortic valve replacement (SAVR) within the intermediate risk patient population. These trials were also remarkable for the low complication rates observed in the TAVR groups. With the data so promising, some conference attendees began discussing whether TAVR should replace SAVR as the gold-standard treatment for patients with severe symptomatic aortic stenosis (AS).

A Dose Of Reality

The truth, however, is that TAVR is not ready to supplant SAVR quite yet. Several issues still need to be addressed or investigated. For example, physicians I’ve spoken to have reiterated that the economics of the procedure don’t lend it to widespread adoption yet. A TAVR device is $30,000 — more than six times the price of the average surgical valve. Additionally, for a hospital to be reimbursed for a TAVR procedure, the patient must be evaluated by a multidisciplinary team that involves multiple cardiac surgeons and interventional cardiologists. While there are some cost savings compared to surgery, such as shorter length of stay and ICU time, those cost savings don’t make up for the dramatic increase in up-front expenses. The fact that new permanent pacemakers are required in up to 20 percent of TAVR implantations also adds to the overall cost of the procedure. The PARTNER 2 trials did not show a marked decrease in permanent pacemaker implantation (PPI) rate.

Reimbursement also is unlikely to become dramatically more favorable to make this procedure more affordable for hospitals. Most of the patients being treated with AVR are elderly, meaning an increase in procedure costs would fall on the Centers for Medicare and Medicaid Services (CMS). When discussing the economic impacts of TAVR becoming a gold-standard treatment, some ACC panelists mentioned that CMS pays close to $500 million for SAVR procedures today, and this would increase to $4 billion or $5 billion if TAVR were performed for all procedures. This is a cost that CMS is unlikely to embrace, potentially limiting reimbursement to specific patient subpopulations.

Finally, the durability of TAVR devices is still relatively unknown. The average age of patients treated in all the major TAVR trials that have been presented was over 80 years old. As a result of this advanced age, most patients die from other causes before the long-term durability of their implanted TAVR devices can be studied. In contrast, the average age of patients treated with all forms of surgical AVR in the U.S. is more than 10 years younger, at 70 years old, according to the STS National Database.

Fortunately, all patients treated commercially with TAVR are tracked in the STS/ACC TVT Registry, which was implemented within a month of the first TAVR’s commercial approval in 2011. As more patients are treated, more long-term data will become available. Still, the registry itself — like the commercial TAVR market — is only four years old at this point, and the devices will need to show a much longer track record of efficacy before becoming accepted as the gold-standard treatment for severe AS.

The Value Of Increasing Indications

Despite economic and durability questions, the clinical trial results presented at ACC show that TAVR should certainly be implanted in many more patients than it is currently. Many physicians were calling for immediate guideline updates to reflect the fact that TAVR should be the preferred treatment for all high- and intermediate-risk populations, and an FDA approval for the intermediate-risk indication is expected in late 2016. We expect that such an approval would allow many more patients to be treated with TAVR. As with the high-risk patient population, about half of the growth into the intermediate patient population is expected to be fueled by patients coming off the sidelines, while the other half will involve cannibalization of surgical procedures. 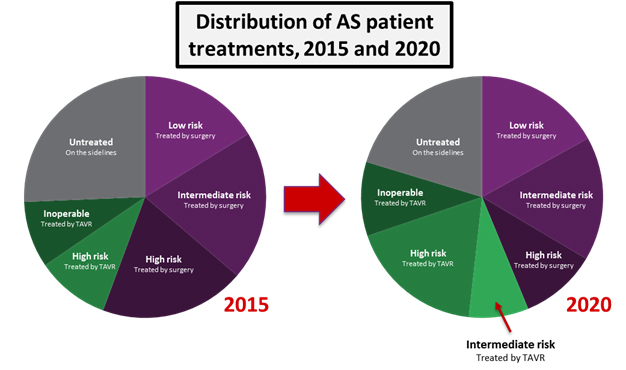 While intermediate-risk patients will not represent the majority of patients treated in 2020, the addition of intermediate-risk patients as TAVR candidates will raise the procedure’s annual growth from an average of 7 percent up to 12 percent. For a market already worth close to $1 billion, this additional growth translates to an extra $400 million in annual revenues by 2020. Assuming the approval of an intermediate risk indication, the U.S. TAVR market is expected to reach close to $1.8 billion within 5 years. 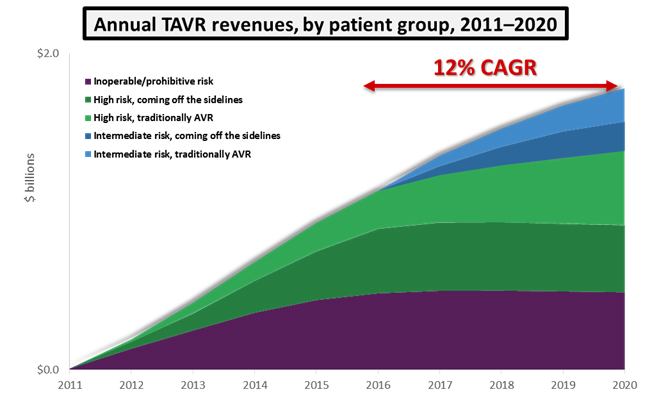 The PARTNER series of trials features Edwards Lifesciences’ SAPIEN device family exclusively, and FDA approvals in the TAVR market are brand- and device-specific. The anticipated approval of intermediate-risk patients will therefore boost Edwards’ market share exclusively, at least until Medtronic is able to gain a similar approval. Medtronic does have an intermediate-risk trial underway (the SURTAVI trial), but results aren’t expected to be presented until the ACC.17 in March of next year. Medtronic has tended to receive FDA approval sooner after its trial presentations than Edwards, but it will still likely be the second half of 2017 before Medtronic’s Evolut R gains approval in this indication, giving Edwards almost a full year head start in the intermediate-risk patient population.

Since the beginning, Medtronic and its CoreValve platform have been a step behind Edwards in the U.S., but that may change after the next round of trials. Both companies have initiated trials for low surgical risk patients, with both the PARTNER 3 and CoreValve Low Risk trials receiving IDE approval in Q1 this year. Very early estimates show that Medtronic is expected to have preliminary data from its trial about 6 months earlier than Edwards, possibly giving the company its first first-mover advantage in the low-risk indication. 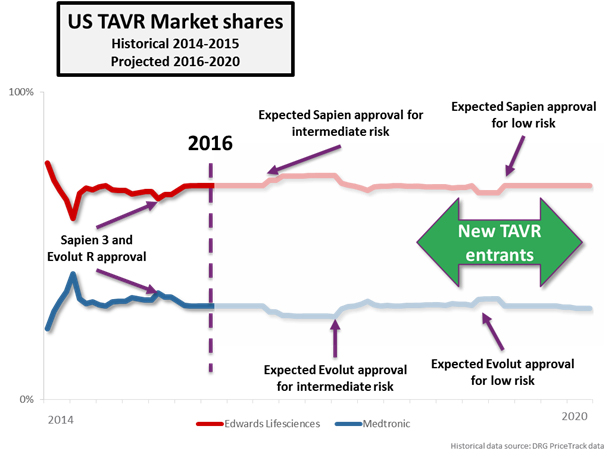 But, Medtronic and Edwards are not the only companies conducting major clinical trials in this space. While the two have enjoyed being the only TAVR competitors in the U.S. for quite some time, competition will intensify over the next 5 years. Boston Scientific, Direct Flow Medical, and St. Jude Medical are all running pivotal trials for their TAVR devices, and these companies are expected to enter the U.S. market as early as 2017 (Boston Scientific’s trial has completed enrollment already). Each device has unique characteristics that could help it gain share in the US market: 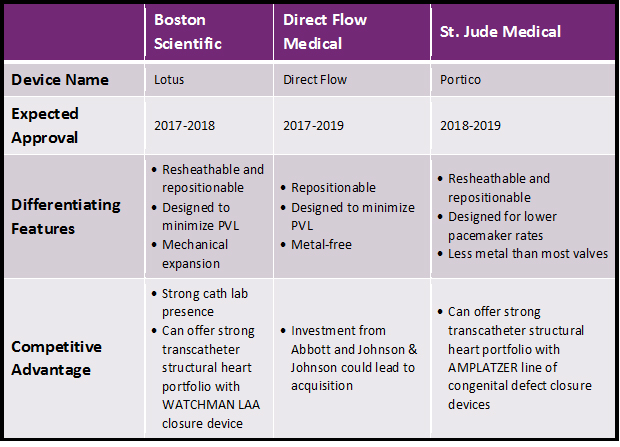 In addition to the factors mentioned above, each situation is unique and could affect device adoption in different ways. For Boston Scientific’s Lotus device, the RESPOND trial presented at ACC 2016 showed that balloon predilitation and postdilitation may not be required, potentially reducing complications. For Direct Flow Medical, an acquisition by Abbott would allow the device to be positioned in the latter company’s structural heart portfolio, which includes the successful MitraClip device. Finally, St. Jude could sell Portico at a slight discount compared to competitors: Clinical trial versions of the device have been selling for about $5,000 less than competitors’ clinical trial devices. While this doesn’t guarantee anything, it could be a signal that the company intends to compete on price.

Approval for any of these devices would be limited, at first, to the inoperable or high risk indications, with Edwards and Medtronic maintaining an advantage in the intermediate- and, eventually, low-risk patient populations. However, with a projected market of $1.8 billion by 2020 — of which only $400 million will be exclusive to devices labeled for intermediate risk — there will be plenty of opportunities for these companies to achieve success.

Sean Messenger is a principal analyst on the Medical Device Insights team at Decision Resources Group. In this role, he leads a team of analysts responsible for monitoring and analyzing global cardiovascular device markets through the production of DRG’s Medtech 360 product.

Sean has participated in several speaking engagements, including contributing to a joint Bloomberg-DRG TAVR Roundtable at ACC 2016, leading a conference session at the Life Sciences Forum in Costa Rica entitled “The Next Five Years in the Cardiovascular Device Market,” and speaking at TCT 2013 during a breakfast session entitled “Driving Growth in the World of Transcatheter Cardiovascular Devices.”

Sean holds an Honors BSc from the University of Waterloo, with a specialization in biotechnology and a minor in economics.