A Look Ahead: US FDA And Medical Device Regulations In 2021 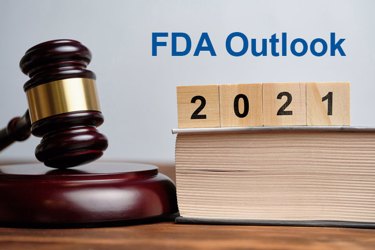 The pandemic year of 2020 presented FDA with many enormous challenges, including how to use emergency authorizations to approve diagnostic tests, personal protective equipment, and therapies, how to conduct remote inspections, and what accommodations should be made for clinical trials disrupted by COVID-19. On top of that, FDA found itself facing an enormous and unprecedented amount of political pressure, with its actions, or lack thereof, potentially altering the presidential election. Yet through it all, the agency continued to largely fulfill its core responsibilities of ensuring compliance and helping to bring new products to market, including, for example, approving by its own reckoning 132 novel medical devices, a significant increase over 2019. Now that we are in 2021, what big developments can we expect from FDA in general and regarding medical devices in particular? This article explores some of the FDA initiatives and activities worth following in 2021.

The brief but tumultuous term of Dr. Stephen Hahn as the 24th Commissioner of Food and Drugs ended on Jan. 20, 2021, 13 months after it started. As of press time, the Biden administration has not nominated a successor. Dr. Janet Woodcock, the head of CDER, is serving as acting commissioner and has emerged as one of two candidates being mentioned as most likely to be picked for the permanent role. The other is Dr. Joshua Sharfstein, a former deputy commissioner (2010–11) who is currently a dean and professor at the Johns Hopkins Bloomberg School of Public Health. Speculation by FDA observers is that Woodcock would focus more on traditional FDA mandates and issues like product development and approval, while Sharfstein would be more likely to prioritize broader public health issues and make more use of the FDA’s bully pulpit. It is expected that a decision will be announced in the next month. When that decision is made, confirmation hearings will likely make clearer what Congress wants the new commissioner to focus upon and what that commissioner’s predilections are.

One subject that bears watching is how FDA will adapt the regulation of devices that are being sold under Emergency Use Authorizations (EUAs) granted or enforcement policies issued during the COVID-19 pandemic. EUAs are not full approvals or clearances to market a product indefinitely and are expected to terminate when the public health emergency ends. Therefore, companies currently holding or expecting to receive EUAs, will need to monitor what steps are needed to obtain full authorization or else plan to cease marketing the product. It is worth noting, however, that FDA has a history of not ending public health emergencies quickly.

For years, FDA has talked about aligning its Quality System Regulation (QSR, 21 C.F.R. § 820) with the international medical device quality system, ISO 13485, which is used by many other countries. FDA has stated that it plans to issue proposed regulations in 2021 to finally implement this plan. Medical device manufacturers should monitor this process and consider commenting on the proposed regulations.

FDA issued a final guidance in January for the Safer Technologies Program (STeP) for medical devices [covered in Med Device Online here]. Among other things, STeP is intended to give device companies earlier and greater interaction with FDA reviewers. STeP is intended to help improve the approval path for devices that can have meaningful impacts for patients but that do not meet the stringent criteria to be considered breakthrough devices. Device companies, particularly smaller companies with limited resources, should familiarize themselves with this program and consider taking advantage of it.

While all of these focus areas affect medical devices, the data one is most relevant to medical devices, because of its sub-focus areas: Product Safety Surveillance, Artificial Intelligence, Digital Health, and Use of Real-World Evidence to Support Medical Product Development and Regulatory Decision-Making. Three other sub-focus areas worth noting are Technologies to Reduce Pathogen Contamination, Advanced Manufacturing, and Model-Informed Product Development. Although this initiative was established under the direction of Commissioner Hahn, it represents input and buy-in from a large swath of the agency, and thus we do not expect the new commissioner to substantially alter or back away from it.

Although third-party servicing of medical devices has long been viewed as a potential safety concern, the FDA has not intensively regulated this practice. Indications are that this will change, starting with an attempt by the new administration to clarify the difference between servicing and remanufacturing. In general, servicing refers to returning a device to its original condition (that is, maintaining and repairing it), while remanufacturing changes the safety and performance of a device. Servicing is subject to more regulation. Although easy enough to summarize, the distinction between the two sometimes can be difficult to discern.

In addition to FDA regulations and/or guidance in this area, legislation is also possible. For example, in August 2020, Senator Ron Wyden (OR) introduced the Critical Medical Infrastructure Right-to-Repair Act and has indicated that he intends to re-introduce it during this Congress.

Spurred by the coronavirus pandemic, FDA initiated a study, conducted by America Makes, to summarize the impact of 3D printing, also known as additive manufacturing, on the overall COVID-19 response and in particular its use to rapidly increase the supply of personal protective equipment. Additive manufacturing is expected to have a growing impact on the medical device field, and we expect to hear more from FDA on this topic in 2021. FDA has also indicated an ongoing interest in continuous manufacturing.

Cybersecurity has been an area of growing concern for FDA. In response, CDRH has created a device cybersecurity division. Recently, the agency announced that it had appointed Kevin Fu as acting director of this new division. Fu is a prominent medical device security researcher at the University of Michigan and the founder of its Archimedes Center for Medical Device Security. He has been very active in training medical device company personnel in cybersecurity engineering. Although it is only a one-year appointment and Fu will return to his role at the University of Michigan thereafter, his appointment is being hailed as a signal that FDA has elevated its treatment of cybersecurity. Fu has told medical device manufacturers that they will see a new FDA cybersecurity draft guidance this year.

In January 2021, FDA issued its Action Plan for Artificial Intelligence/Machine Learning (AI/ML)-Based Software as a Medical Device (SaMD), building on its April 2019 Proposed Regulatory Framework for Modifications to AI/ML-Based SaMD. Although it is not a formal guidance, the action plan does summarize FDA’s current thinking on the subject and is intended to further discussion on this topic and elicit comments and feedback that FDA may use to formulate guidance planned for later this year. Significantly, the action plan indicates that because AI/ML-based SaMD continuously learns and modifies its algorithms, it would be impractical to solely regulate the technology under FDA’s regulatory framework for SaMD. Thus, FDA is thinking that pre-market submissions for AI/ML-based SaMD can be used by the agency to review and assess the range of modifications to devices that can be expected to result from the AI/ML and how such modifications would both stay within that range and occur in a controlled manner.

In the digital health field, FDA is expected to continue its efforts to improve the review and availability of digital health medical products, including better coordination between FDA’s drug and device centers.    FDA’s Digital Health Center of Excellence will lead these efforts. Note that some members of Congress have been critical or skeptical of FDA’s digital health plans. These members include Senator Patty Murray, who now leads the Senate Committee on Health, Labor and Pensions and can be expected to increase Congressional scrutiny.

The pandemic stimulus legislation currently under consideration includes $500 million in additional funding for FDA. If this makes it into the final law, which could be finalized before the end of March, it would represent an almost 10% increase over the FDA’s fiscal year 2020 funding, and it could have a very significant impact on the agency.

As always, user fee reauthorization will have a significant impact on device manufacturers, so negotiations and discussions in that area bear watching.

The 21st Century Cures Act had a big impact on life sciences companies. Congress and some interested parties are now discussing follow-up legislation that is being referred to as 21st Century Cures 2.0. An omnibus bill of this sort could move forward some more targeted bills that currently face an uncertain path to enactment. For example, legislation has been proposed that would create a new type of diagnostic medical product called an in vitro clinical test (IVCT), with new regulatory requirements and user fees. Although there is some bipartisan support for this, incorporation into a broader regulatory legislative package would likely be an easier path to daylight.

In 2020, FDA showed that it could respond to a global pandemic and resist political pressure while still carrying out is core functions. It is therefore reasonable to expect that the agency will advance a large number of policies and initiatives in 2021.

Jim Shehan is chair of Lowenstein Sandler’s FDA regulatory practice. He has extensive pharmaceutical and healthcare industry expertise, including FDA regulatory matters. Before joining Lowenstein, Jim was General Counsel and Corporate Vice President for Law, Government Affairs, and Quality at Novo Nordisk and worked as a regulatory counsel at the FDA.