Several years ago, ISO requested that the national standards committees review ISO 14971:2007 — the current international version — to determine whether it needed updating and improvement.  The request went to the national committees of ISO and IEC, as the medical device risk management standard was jointly developed by the two organizations.  The parent committees submitted votes on the currency of the document, as well as comments for its improvement.

When the votes were counted, the standard was reaffirmed as being current, but a significant number of comments requested additional information on implementation of the standard.  As a result, ISO issued a call for an update to the document.  At the same time, it was recognized that a little-known guidance document on medical device risk management, ISO TR 24971, needed to be included in the review-and-update activity.

In 2016, the ISO Technical Management Board directed JWG1 to revise both documents to address comments received during the voting process. The assignment from the ISO Technical Management Board included the statement that the risk management process was not to be revised. A requirement to move most of the informative annexes to the TR 24971 also was included, as the TR could be more easily revised as the need arises, thus negating the requirement to reopen the standard each time informative annexes need revision.

The process to revise and update began in Tampa, Fla., in 2016 and continued through 2017 with meetings in Delft, Netherlands, and Hiroshima, as well as a number of WebEx meetings comprising task teams assigned to specific areas. Recently, the technical committee met in Long Beach, Calif., to affirm the work done on ISO 14971, and to continue work on the revision of ISO TR 24971.

The technical committee/JWG1 will meet in Seoul, South Korea in November — in conjunction with the parent committee ISO TC 210 meeting — followed by a meeting early in 2019 in São Paulo, Brazil. The technical committee will review the comments and prepare proposals on how best to address comments submitted by national committees. In addition to these face-to-face meetings, online meetings will be held to continue the work.

What is important to the industry is the direction this update process is taking: per ISO’s instructions, the aim is not to revise the risk management process, but rather to improve the information on implementation of the risk management process. So, companies with processes that currently conform to the standard should not have to make large revisions to their processes to comply with the new document, as it is presently being envisioned.

One technicality that will be seen in ISO 14971 is the addition of a new Clause 2, as required by ISO to identify Normative References, even though there are none. That will change the numbers of all following Clauses which will index by one; thus, the Definitions, presently in Clause 2, will be identified as Clause 3, etc.  A minor point, but still, references in a company’s documents may have to be updated when they refer to clauses in the standard.

Another item being tackled by the joint working group is the growth of risk-benefit (or benefit-risk) being discussed by regulators. Since the term “benefit” is not defined, it will be defined in the upcoming revision. The term “risk” already is defined in the standard. Since its first release, the standard has discussed risk-benefit analysis, so the defining of “benefit” is overdue. The current requirements for risk-benefit analysis are not expected to change at this point.

Another important factor is that ISO 14971 is an international standard, recognized throughout the world. Some regions (such as EU) and countries may add to the informative annexes, but they cannot revise the standard’s requirements. The EN ISO 14971:2012 confused that position when CEN published its version of the risk management document. The CEN document contained informative annexes— not requirements — that identified what the committee felt were shortcomings in the risk management process that failed to meet requirements of the Medical Device, Active Implantable and In Vitro Diagnostic Directives in the EU. There was a great deal of controversy over what many felt were misinterpretations of the CEN standard, but this applied only in the EU.

The EU’s recently published Medical Device Regulation (MDR) addressed the controversial points, albeit indirectly. The new edition of ISO 14971 will continue to be an international standard and will not address national and regional issues; these will be left up to the national and regional standards bodies. While EN ISO 14971:2012 is harmonized to the Medical Device Directives, it is not harmonized to the MDR. A new CEN document will have to be created to address these differences, and that may not happen until the new ISO 14971:20XX is released.

While a number of European countries are represented in JWG1, there is no official CEN participation in the development of the new edition. A harmonization process for the new regulation in Europe has not been established and, furthermore, hundreds of standards had not been harmonized to the Directives as late as November 2017. So, it appears as though Europe will be one uncertainty with which industry will be dealing for a while.

ISO TR 24971 will be the repository for most of the informative annexes formerly in ISO 14971 — again, for ease in revision and updating, according to ISO processes. What is expected to remain in ISO 14971 is the annex providing the rationale for requirements in the standard (presently Annex A), which every user of the standard should review; the flowchart in the present Annex B; and the present Annex E, with concepts highlighted.

Current Annex E will become a revised Annex C in the new ISO 14971 document if all proceeds according to the present plan. The rest of the Annexes in 14971 are slated to move to ISO TR 24971. The work has resulted in a revision of 24971 that has swelled to over 100 pages in its present form.  All the informative annexes in the current 14971 and 24971 currently number around 75 pages.

The Draft International Standard 14971 (DIS) has been published for vote. National committees will circulate this document for review and comment, depending on their own methodology for collecting comments, and then will vote on its acceptance as a DIS. Brazil, for instance, intends to organize a meeting between interested parties to collect comments.  The comments received will be incorporated by JWG1 in a Final Draft International Standard (FDIS), which will be circulated for a final vote for acceptance.

Note that ISO 14971 is the only standard known to have been accepted with a 100-percent affirmative vote, for both the 2000 and the 2007 editions, by both ISO and IEC member committees. Hopefully, JWG1 can repeat this accomplishment.

For ease in understanding the draft documents, the table below identifies the informative annexes as they currently appear in 14971 and 24971 in the left columns. The table then identifies in the right two columns the proposed locations of the annexes.  As we mentioned earlier, the present ISO 14971 Clauses 2-9 now are incremented 3-10 as a result of ISO’s addition of a new Clause 2 for Normative Standards.  However, this new Clause remains blank, as there are no normative references in ISO 14971 as currently proposed. 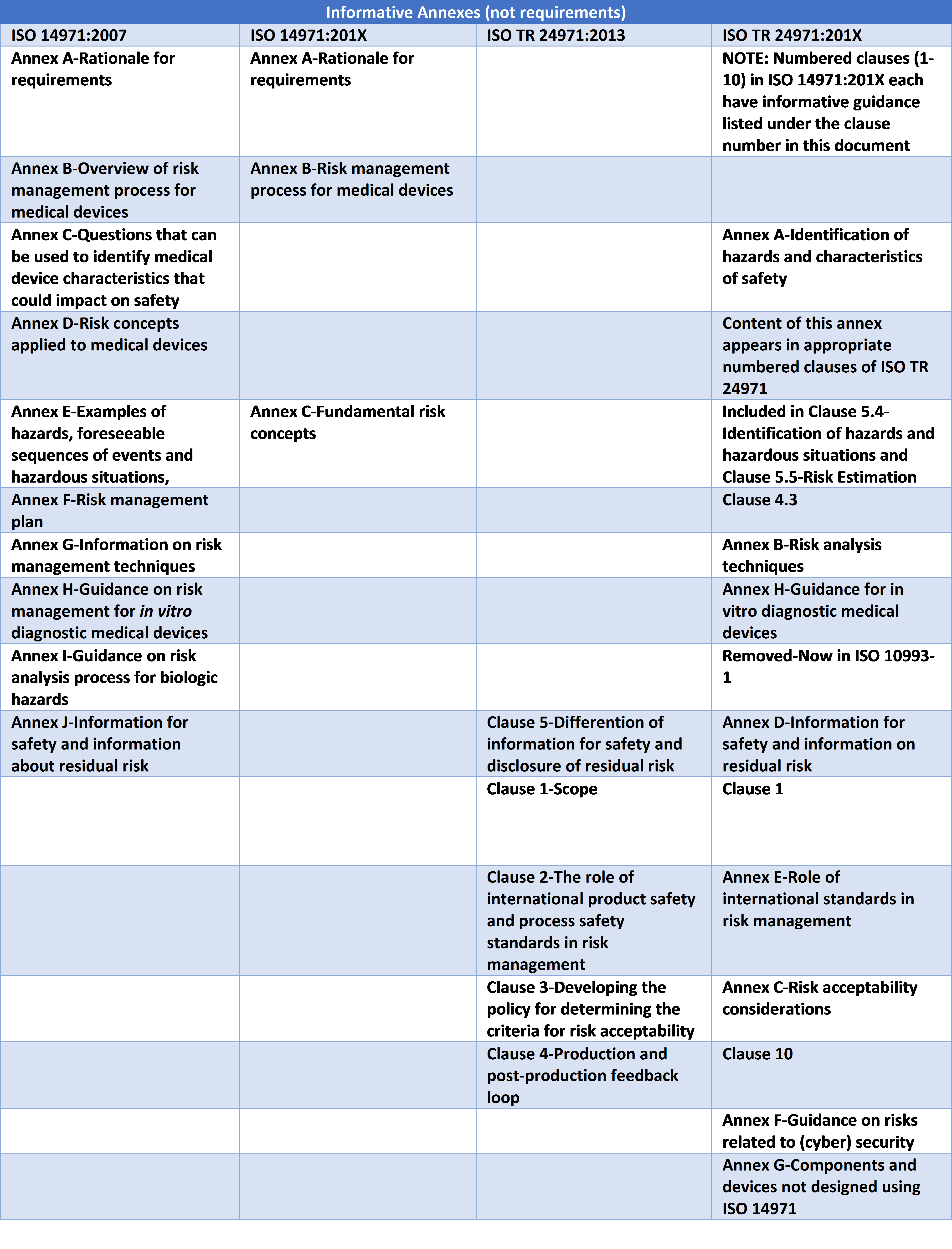 Companies and individuals interested in commenting upon the update drafts should contact their national committees to determine the process for submitting comments to those bodies (which then will be submitted to ISO and IEC, as the drafts are joint documents).  The national committees must submit all comments to to the ISO and IEC bodies, regarding ISO DIS 14971 and ISO DTR 24971, by Oct. 11, 2018.

Edwin Bills is a consultant, ASQ Fellow, Certified Quality Engineer, Certified Quality Auditor, Certified Quality Manager, and is Regulatory Affairs Certified. He provides contracted services in the area of quality systems, regulatory affairs, product liability, and risk management for medical device, combination product, and pharmaceutical companies.  He can be reached at (843)810-2157, or at elb@edwinbillsconsultant.com