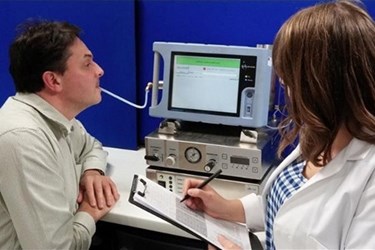 Research suggests that specific biomarkers in a patient’s breath could help oncologists make quicker and easier lung cancer diagnoses, and several “breath test” devices for identifying these biomarkers are currently being developed. Recently, separate research groups in the U.K. and China announced progress in the development of new breathalyzer-type devices that can detect volatile organic compounds (VOCs) in the breath of lung cancer patients.

The American Cancer Society reports that lung cancer accounts for 27 percent of all cancer related deaths, but chances for survival are significantly higher if the cancer is detected early.

Research shows existing lung cancer screens are effective, but they are expensive, time-consuming, and only effective when tumors become visible. A breath test holds the promise of detecting lung cancer at its very earliest stages, increasing chances for a favorable prognosis.

Scientists at the University of Leicester in the U.K. announced the start of a clinical trial to test the efficacy of the Lung Cancer Indicator Detection (LuCID), designed by Cambridge-based Owlstone Nanotech. The device, which is designed to be portable, uses Owlstone’s Gas Chromatography–Field Asymmetric Ion Mobility Spectrometry (GC-FAIMS) sensor to measure VOCs at low concentrations in patient breath, according to a University of Leicester press release.

Salman Siddiqui, a clinical senior lecturer and pulmonologist at the university, will lead the clinical study later this year and expects results by early 2016.

Scientists at Chongqinq University in China are working a similar device using a fluorescent cross-responsive sensor array connected to rotary gas chamber and a data-processing system. The entire detection process, which can search for multiple VOCs and distinguish their levels, takes less than 20 minutes, according to an American Institute of Physics (AIP) press release.

The study was published in AIP Review of Scientific Instruments. Next up for the team is refining the technique and establishing a fluorescent database for lung cancer-related gasses. The researchers cautioned that while initial results are promising, the device must still be shown effective in clinical trials.

The successful commercialization of a breath test could have a huge impact on lung cancer diagnosis and treatment. “Current diagnostic procedures such as chest X-ray, CT scan and bronchoscopy are costly and not without risks, so the benefits of a non-invasive, cheaper alternative are clear,” the University of Leicester’s Siddiqui said in the press release.

Economic research conducted at Cambridge projected that early detection of lung cancer could save 10,000 lives and $386 million in the U.K. alone.

As molecular analysis becomes more cost-effective and reliable, the diagnostic options available to scientists will continue to expand. Scientists around the globe are in a race to see who can develop the smallest and most accurate cancer-detecting sensors available. Earlier this month, MedDevice Online reported about a lung-cancer sniffing breathalyzer in Israel that could potentially connect to a smartphone.