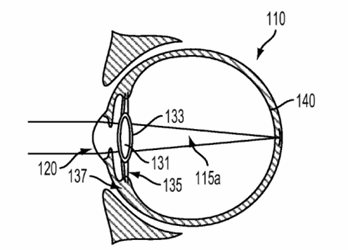 Alphabet has filed a patent application for a corrective smart lens that would inject into the eyeball and conform to the inside surface of the eye’s lens capsule, following removal of the natural lens. According to the application, the device can be controlled by natural movements of the eye and by the lens itself, which is powered by an external antenna.

The patent application for the intraocular device was filed in October, 2014 but only recently published by the U.S. Patent and Trademark Office (USPTO). Though Google is listed as the device’s applicant, Digital Trends speculated that Verily would develop the proposed device because Andrew Conrad — current CEO of Verily, Alphabet’s life science’s division — is listed as the inventor.

The eye’s natural lens works with the cornea to bend and focus light. Under normal biological circumstances, the lens shifts its shape so that the eye can process focused images of objects at various distances. Congenital conditions or degeneration of the eye can usually be corrected with eyeglasses, contact lenses, or surgical intervention. Now, Google is proposing an artificial lens implanted directly into the eye.

“Artificial lenses can be implanted into the eye (e.g., into the space in front of the iris, into the lens capsule following partial or full removal of the natural lens, e.g., due to the development of cataracts) to improve vision,” said the patent author, who went on to explain that the lens would be flexible enough to shift shape under influence of the eye’s muscles. The device would also be coupled with a controller to adjust the lens’ optical power and be equipped with wireless capabilities to communicate with external devices.

In order to place the lens, a surgeon would inject fluid into the lens capsule of the eye and then place the device components within it before solidifying the fluid within the capsule. At this time, the patent is mostly speculative and is not specific about materials used or the exact functions or capabilities of the lens. The device may or may not include a battery, storage, radio components, an external digital interface, and an “energy-harvesting antenna.”

In 2014, Google announced it was co-developing a “smart” contact lens with Novartis that, in addition to correcting vision, would monitor glucose levels in tears. In September, Novartis CEO Joe Jimenez told the Swiss newspaper Le Temps that the project was “progressing well” and that the company head already developed a prototype suitable for human clinical tests set to begin in 2016.  According to Jimenez, this particular lens is equipped with sensors that restore the eye’s ability to focus on nearby objects.

News of Alphabet’s proposed artificial lens implant follows news of patent applications from both Samsung and Sony, each of whom is developing competitive “smart” contact lens technology. The patent filed by Samsung describes a lens that can take pictures and transmit them to a smartphone, according to The Telegraph.  Sony’s proposed technology similarly captures photographs, but includes internal storage, reported the Tech Times.