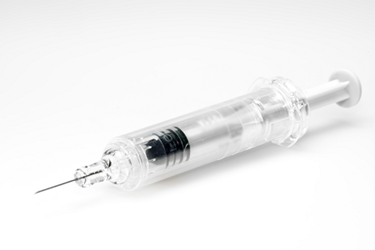 Common prefilled syringes for biologic products have the needle staked in (pre-attached to the syringe). While glass PFSs are manufactured from glass canes and formed using flame forming process to achieve the desired shape and geometry, there are a number of significant differences between a staked-in needle PFS and a needle-free PFS. Even among the same ISO-conforming glass syringes, there are subtle differences between syringes made by different vendors and manufacturing sites. These differences may be negligible when working with standard drug products, but they can become more noticeable as the drug product deviates from the norm, such as drugs with higher viscosity.

Staked-in needle PFSs have a hypodermic needle cannula inserted through the syringe nozzle and secured in place with adhesive. In most cases, UV-cured adhesive is used to allow for finer manufacturing control. The staked-in needle PFS must undergo liquid siliconization of the syringe barrel, and because silicone can interfere with adhesive bonding, siliconization usually takes place after needle assembly. The silicone utilized should be a medical grade silicone of appropriate viscosity. As silicone migrates over time due to gravity, the viscosity of the silicone used in the syringe barrel is critical in striking a balance between syringe performance and silicone migration.

Siliconization technology and processes have advanced significantly over the past decade. As such, it has become much more important for PFS customers to evaluate and understand a vendor’s control strategy. For example, are the vendor’s in-process checks and controls ensuring that the level of siliconization on the syringe barrel is applied uniformly? What are the tolerances? Improper or inconsistent siliconization can have an impact on syringes breaking loose and on extrusion force — critical findings during stability studies that can have a significant impact on the project timeline. Improper siliconization can also produce higher-than-normal subvisible particle counts, depending on the analytical method, technology, and equipment used.

Based on the discussion in Part 1, you may be wondering, why not just use baked-on siliconization, since it’s not prone to silicone migration over time? One reason is because the glue used in securing the needle to the syringe cannot withstand the temperature required for baking silicon emulsion, and since silicone interferes with glue bonding, the needle must be glued in place before the syringe undergoes any siliconization process. As mentioned previously, the glue used in staked-in needle syringes is typically a UV-cured biocompatible adhesive, since manufacturers can better control the amount, curing time, and overall consistency of the glue.

Ensuring the glue used is biocompatible is important because, during the manufacturing process, the needle and syringe hub interface will have an adhesive bulge, and that bulb will make contact with the patient’s skin during injection. We will cover biocompatibility testing, data leveraging, and biological safety / toxicological assessments in more detail in a future article.

Adhesive material also makes contact with the drug product. Despite this fact, separate or stand-alone testing is rarely conducted to assess an adhesive’s compatibility with the drug product and to ensure drug product safety — this is because extractable and leachable studies, which should be conducted on the selected primary container, are expected to have covered this. More details on extractable and leachable studies and strategies from a development and toxicology standpoint will be provided a future article.

As mentioned above, silicone migration can be a challenge. However, new technologies are being developed to immobilize the silicone, like BD XSi technology.

Ethylene oxide is considered hazardous, as it is a mutagen and a carcinogen, among other things. As such, there needs to be sufficient aeration time after ETO exposure to outgas the residual ETO before retrieving the product. The amount of time required for outgassing is part of sterilization cycle development and validation. In addition, products entering ETO sterilization should be well controlled. For example, residual moisture on products should be minimized, as ETO reacts with water to form ethylene glycol. Pharmaceutical companies and contract filling service providers prefer pre-sterilized syringes ready for use in aseptic environments. As such, it is critical to understand how your syringe vendor sterilizes the syringe, whether it is done externally or internally, how the sterilization cycle was developed and validated, and what routine re-validation they perform. ISO 10993-7 and ISO 11135-1 provide additional insights into requirements around ETO sterilization and residuals.

The choice of needle is also critical in the selection of a prefilled syringe. The design and gauge of the needle can have a significant impact on the user experience and injector device performance. Small needle gauges typically result in higher injection force. As such, you must balance various factors such as drug product viscosity, pain, patient population and demographics, and automatic injector device performance and capability when selecting the needle gauge for your product. For example, having a smaller needle will increase injection force — and potentially user difficulty and device performance variability — while having too large of a needle can result in fast injection, leading to increased injection pain and site discomfort.

In addition, there are a number of design nuances and ISO requirements around standard needle cannulas. Within needles of the same gauge, there are often regular, thin wall, and ultra-thin wall needles to choose from. Some syringe vendors have also developed special custom needles to minimize injection force and patient discomfort. The most prevalent needle gauge used for many biologic products is the 27G thin wall needle.

Needle tip design is also important, as it directly contributes to the patient’s pain experience during injection. Needle tips are beveled to facilitate better skin penetration. The base bevel is 3 bevels, and while it is more common today to utilize 5-bevel needles, 6+-bevel needles have also emerged in the insulin pen needle space, which will be discussed in a later article. The needle tip bevel design, in conjunction with the siliconization of the needle exterior, is critical to minimizing patient injection discomfort. It should be noted that if one looks closely under the microscope, there are differences between the various 5-bevel needles offered by different vendors.

Special attention should be paid to needle shields. For one, if the injection is a manual process, a soft needle shield can pose a needle-stick risk to patients, as well as the potential to bend the needle, as compared to rigid needle shields. In addition, you should consider the design of the injector device with which the prefilled syringe will be used.

Just like the plug for needle-free PFSs, the needle shield elastomer should also be carefully considered in relation to your drug product to ensure compatibility. This is usually done as part of stability studies.

As in needle-free PFSs, the plunger/stopper of a staked-in needle PFS should be carefully considered from multiple angles. For higher-viscosity drugs, newer plunger designs, such as West NovaPure and other similarly designed plungers, should be considered, as these newer plungers are designed with more uniform ribs that make less surface contact with the syringe barrel. This design minimizes friction with the syringe barrel, providing improved and a smoother break-loose and extrusion/injection force profile. Reducing this force can aid in the performance of the autoinjector and improve user experience during manual injection.

While newer plungers/stoppers may help with the injection experience, attention should also be paid to their ability to maintain closure integrity, especially during shipping at high altitudes. It is a known fact that at altitude, due to the low atmospheric pressure, the headspace will expand, moving the plunger toward the flange.  The degree of movement is dependent on a number of factors, such as headspace size and frictional force between the plunger and the syringe barrel. The amount of movement will also have an impact on whether container closure integrity is maintained or breached. The higher the headspace within the syringe, the more the plunger moves at altitude. When selecting plungers and primary containers, this should be taken into account in conjunction with your filling operation capabilities, as different plungers can require changes to the filling machine and stoppering/sorting bowl, just to name a few.

When selecting a prefilled syringe for an autoinjector, the choice of finger flange types can also help de-risk your development and manufacturing operation. For many autoinjectors used with the traditional cut flange syringe, the syringe orientation during device assembly becomes critical. This is because most autoinjectors orient the syringe so that the cut flange does not interfere with the autoinjector safety shield mechanism. Cut flange interference can lead to difficulty activating or failure of the safety shield to extend back out and lock out. With the newer small, round flange, this problem is overcome. In a future article discussing control strategy and approach, this will be an important factor.

While there are many considerations when selecting prefilled syringe vendors, you will often find that based on years of technology and manufacturing advancements and improvements, a number of syringe parameters are comparable among various vendors. Thus, it becomes important to evaluate the reputation of, and your current vendor relationship with, a vendor. How well is the vendor currently supporting your programs, and are there predictors/indicators that the vendor desires to build a positive and collaborative working partnership? Is the vendor more focused on pushing sales and achieving their own outcomes, or are they invested in co-developing the right solution for your need? The answers to these questions are critical, as successful programs are built upon good partnerships, and with a good, mutual partnership, your programs will run more smoothly and your vendor will have a much higher likelihood of hitting their milestones and deliverables.

Michael Song, Ph.D., leads the biological device functionality, safety, and digital connectivity group within AstraZeneca’s biologic device development. In his current role, he oversees device functionality and safety, primary container science and technology, biocompatibility, container closure integrity strategy and testing, and digital connectivity development. Prior to his current role, Song was head of the Device, Packaging, and Process Engineering Department at Adello Biologics (part of Amneal Pharmaceuticals). He has held key technical positions at Stryker, Amgen, and Kavlico Corporation and has led the development of both combination products as well as 510(k) medical devices. He received his postdoctoral training at Barrow Neurological Institute / St. Joseph Hospital and Medical Center (part of Dignity Health) and holds a B.S. in electrical engineering from Purdue University and a Ph.D. in neuroscience and toxicology from Iowa State University.