Arrhythmia Is Gonna Get You 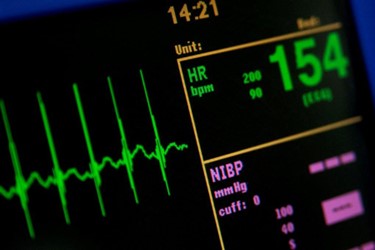 Atrial fibrillation (AFib) is the most common type of heart arrhythmia. An arrhythmia occurs when the heart beats too slowly, too fast, or in an irregular way. When a person has AFib, the normal beating in the upper chambers of the heart (the two atria) is irregular, and blood doesn’t flow as well as it should from the atria to the lower chambers of the heart (the two ventricles). To better understand, view the American Heart Association AFib animation online.

Some people who have AFib don’t know they have it, and don’t have any symptoms. Others may experience one or more of the following symptoms:  irregular heartbeat, heart palpitations (rapid, fluttering, or pounding), lightheadedness, extreme fatigue, shortness of breath, or chest pain.

According to the CDC, an estimated 2.7–6.1 million people in the United States have AFib, costing the U.S. about $6 billion each year. With the aging of the U.S. population, this number is expected to increase. More than 750,000 hospitalizations occur each year because of AFib, and it contributes to an estimated 130,000 deaths each year — a death rate that has been rising for more than two decades.

But don’t say you weren’t warned. Over 30 years ago, on Aug. 1, 1987, Gloria Estefan and the Miami Sound Machine peaked at #5 on the U.S. Billboard Hot 100 chart with their smash hit, Rhythm Is Gonna Get You. (Now go ahead and try and get the tune out of your head for the rest of the day.)

The problem is, recurrent AFib after catheter ablation occurs in at least 20- 40 percent of patients, according to a study published in the Journal of Atrial Fibrillation. Repeat ablation is primarily considered for those with symptomatic AFib recurrences occurring at least 3 months or more post-ablation. Why does this happen? It happens because existing electrophysiology equipment can “fib” about AFib.

I talked with Ken Londoner – founder, chairman, and CEO of BioSig Technologies — about the company’s PURE EP system. PURE EP is designed to record and display high-fidelity cardiac signals, which may allow electrophysiologists to better characterize tissue, both prior to and during ablation procedures.

“We got into the industry with a group of engineers. Our lead engineer was at the biomedical lab at UCLA for many years, and had been developing advanced heart-monitoring capabilities when he was introduced to the Cleveland Clinic back in 2007. Doctors at Cleveland Clinic were interested in the capability to take distortion and noise out of heart monitoring signals to have more reliable information to make their diagnoses,” Londoner explained.

With the PURE EP System, raw unfiltered signals are acquired from electrodes at the tip of the catheter placed on the heart. Proprietary hardware and software, designed to effectively eliminate noise, artifact, and baseline wander in real time, present clear signals during EP studies and catheter ablation. This may enhance clinical decision-making by revealing the most important parts of the signals — exposing high-frequency micro-components in the midst of large physiologic signals; fractionated atrial and ventricular electrograms; and high-frequency, low-amplitude signals.

BioSig’s product will be positioned in the electrophysiology market with giants like GE Healthcare and Boston Scientific. Today, hospitals widely use GE Healthcare's CardioLab, and Boston Scientific’s LABSYSTEM PRO EP, both of which have been in the marketplace for decades and, according to BioSig, have not had signal-related upgrades in quite some time. Market entry is never easy, but this seems like a significant challenge for a new company. I asked Londoner about his approach. “We are not going after the competition head-on. We believe we are complimentary to existing technology, and non-threatening. We are a new system, I dare say, a new category. We consider ourselves to be an information system – not a recording system and not a mapping system,” Londoner clarified.

In this era of medical device development — when evaluating human factors not only makes good business sense, but is a regulatory requirement — BioSig Technologies has done its homework, conducting a nationwide survey of electrophysiologists late last year. Survey respondents rated all six features of the PURE EP System as being “very helpful” for their ablations, emphasizing overall “noise” reduction and improved signal clarity/accuracy as key benefits.

I had one overarching impression of BioSig during my discussion with Londoner: the company has been patient, and is focused on its long-term vision.

“Our ability to raise funds is unique. We raise our own capital. We have a knack for finding the right long-term investors interested in seeing this evolve over time,” Londoner explained. “When a company is funded by venture capitalists, I think it increases the likelihood of them being assimilated by a larger company at the time of FDA clearance. We have accepted no VC money — not a penny — so our decisions are geared by long-term value creation. For us, we have a longer-term vision because we believe we have a platform. Our 10-year collaboration with Mayo Clinic [signed last year] is really a technology and clinical collaboration.”

Near the conclusion of our interview, Londoner spoke of American physicist, inventor, entrepreneur, and philanthropist Alfred Mann. Mann created and grew numerous life science companies — including Mini Med, Pacesetter, and Advanced Bionics — each of which became parts of larger organizations (Medtronic, St. Jude Medical, and Boston Scientific, respectively). But, those acquisitions did not happen until each of the startup organizations had experienced a decade or more of growth and innovation.

“Al Mann was always looking toward making a clinical impact and taking a long-term view. He was unique in his ability to finance his companies; he didn’t have a short-term focus. I have a lot of respect for what Al was able to achieve, and I think his track record was the best in the industry,” Londoner concluded.

If Londoner is able to match the entrepreneurial rhythm of Al Mann, BioSig Technologies will keep on beating for quite some time.