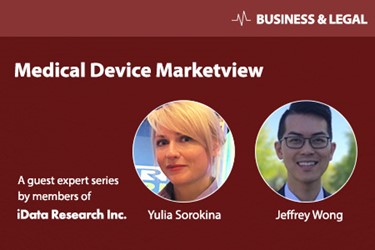 According to a recent market study, procedures in the combined Asia-Pacific (Australia, Japan, South Korea, India, China) hip and knee replacement market are projected to grow at a 10 percent CAGR between 2017 and 2024 — approaching nearly 2.4 million procedures performed by 2024.1

In contrast to developed countries, where the large joint reconstruction market is in its mature stage and can be characterized by a high level of saturation and product commoditization, the hip and knee replacement markets in India and China currently are underserved and, thus, present tremendous opportunities for large joint device manufacturers. The combined number of hip and knee procedures in India and China will double by the year 2024, due not only to natural factors — such as a growing incidence of osteoarthritis and an ever-aging population — but also due to the increasing affordability of the surgery.

Currently, a large percentage of people in India and China who qualify for hip or knee replacements either are put on long waitlists, due to a lack of qualified surgeons, or are simply not able to afford the surgery. However, with the continuous penetration of health insurance, rising disposable incomes in the developing countries and — most importantly — a steady reduction in average selling prices, considerably more people will be able to afford joint replacement in the near future. 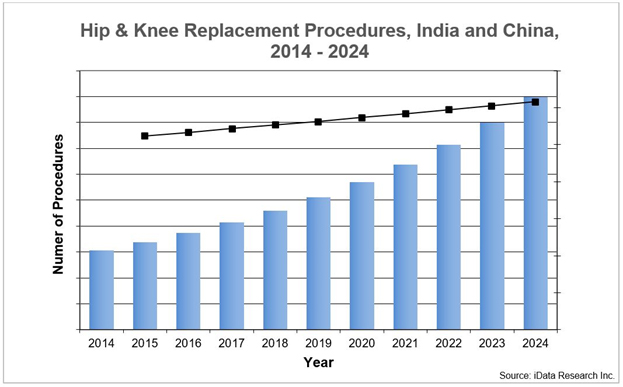 The trend of price deterioration applies to the global orthopedic markets and is caused by a number of factors, such as increased competition and increased pressure from healthcare providers and governments that closely manage their budgets. While average implant prices in the United States have steadily declined over the past few years due to the purchasing power of Group Purchasing Organizations, prices in some European countries have been dropping due to the tender system applied by some governments to reduce healthcare spending. As for the Australian market, reimbursement rate management and private healthcare reform have been lowering average prices in the country.

While the steady price decline limits market value growth of hip and knee replacement devices across the globe, it is expected to have a particularly significant effect on the Indian and Chinese markets over the coming years. This trend incentivizes market players to develop cost-effective solutions in order to capitalize on the growing number of procedures in the most populous countries in the world.

Currently, the Indian healthcare system is dominated by the private sector, and only a small fraction of the vast Indian population is covered by health insurance. While average incomes are increasing and more healthcare insurance providers are entering the Indian market, hip and knee replacement procedures typically have remained too costly for a large percentage of the Indian population.

In August 2017, to address this problem, the Government of India introduced a price cap for knee implants, fixing a maximum retail price (MRP) at a level nearly 69 percent lower than the previous average MRP in the country. Effective Aug. 16, 2017, the average MRP for cobalt chromium knee implants — the most widely used in India — has declined by 65 percent. The average MRP drop for a prosthesis containing special metal types, such as titanium and oxidized zirconium, declined 69 percent.

Addressing the new pricing regulation, Shri Ananth Kumar, Minister for Chemicals & Fertilizers and Parliamentary Affairs of India explained, “it is a step to prevent unethical profiteering and ensure affordable and quality healthcare for the last man.” He added that a violation of the new regulation would lead to criminal charges and the cancelation of licenses.2

According to some market experts, similar regulation changes affecting hip implants may be introduced in the near future, presenting a significant threat to the overall market size for hip replacements in the country.

According to the Government of India, this National Health Protection Mission will provide 500,000 rupees annual benefit per family, without restrictions on family size. Under Modicare, Indians will be able to receive care at any registered private or public hospital across the country.6 While the extent of Modicare’s effect on the large joint replacement market in India cannot yet be determined, the program is expected to significantly drive up a number of hip and knee replacements in the country.

In recent years, China has been focusing on healthcare-related initiatives, prioritizing health in many governmental policy areas. In October 2016, Chinese regulators introduced the “Healthy China 2030” medical reform initiative, which reflects China’s plans to provide access to affordable basic healthcare for the entire Chinese population over the next decade.3,4 In its 13th 5-year plan, the Chinese government deepened its medical reform plans and outlined a reform strategy to be implemented within the next several years.5

These plans include improvements to hospital quality management and health insurance coverage, as well as a reformed healthcare hierarchical system. The government of China also intends to increase its control over medical device prices to decrease public hospital costs and improve medical expenditure management. With an initial focus on hip implants and some other non-orthopedic medical devices, the Chinese government initiated cost reduction in the market in 2017.

The long-term effect of China’s governmental initiatives regarding the large joint replacement market will be clearer soon. While the measures are expected to significantly increase the number of large joint procedures, the cost-cutting measures will limit market growth. However, considering that the Chinese large joint replacement market currently is underserved, the procedure volume growth is expected to outweigh the negative effect of price cuts.

The drop in large joint implant prices across India and China will significantly affect large international manufacturers, whose product offerings tend to be considerably more expensive than the products of local manufacturers. While price reduction is expected to dramatically increase the number of orthopedic surgeries performed in India and China, it likely will hinder product innovation in these countries. However, even considering this market limiter, the combined Indian and Chinese large joints replacement market value (including hip implants, knee implants, and bone cements) is projected to increase rapidly, exceeding $2 billion by 2024. 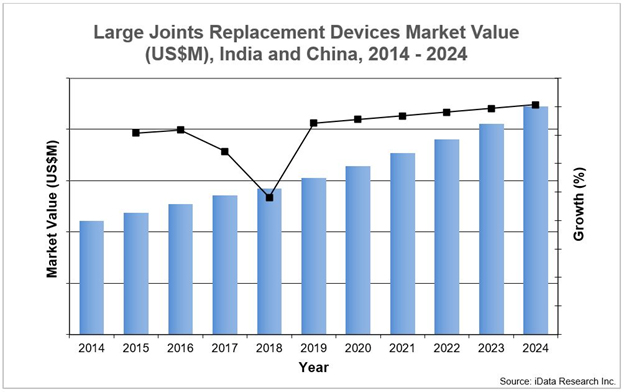 Yulia Sorokina is a Research Analyst at iData Research. As the lead analyst for our Asia-Pacific research on Large Joint Reconstruction she has extensive experience covering many orthopedics markets in most major regions around the world.

Jeffrey Wong is the Analyst Director at iData Research. Through many years of analysis, he has been the lead on most of iData’s medical, dental, and pharmaceutical market research and now drives research strategy, product development, and consulting research.