ASTM Standards For Cleanability Testing Of Pharmaceuticals And Medical Devices

By Andrew Walsh and Ruijin Song 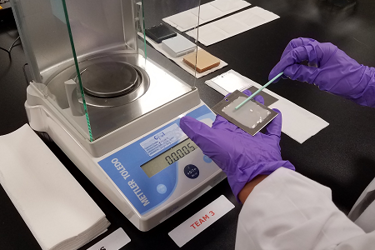 Part of the Cleaning Validation For The 21st Century series

In the early days of space exploration, the National Aeronautics and Space Administration (NASA) had several accidents concerning the use of oxygen, in particular, the 1967 Apollo 1 fire that cost the lives of three astronauts, Roger Chaffee, Virgil “Gus” Grissom, and Ed White II. While the hazards of oxygen were understood by the industries that used oxygen, NASA was not as familiar with the hazards, and the investigation of the 1967 accident found that there were no industry standards and best practices around oxygen safety at that time.1

Subsequently, an ASTM Committee, G04 on Compatibility and Sensitivity of Materials in Oxygen Enriched Atmospheres, was formed in 1975 to address safety issues relating to the use of oxygen. Since then, NASA, in conjunction with companies involved with oxygen service, began developing industry standards for oxygen safety through the G04 Committee. Over the ensuing years, G04 developed and published many standard test methods and practices for determining the compatibility and sensitivity of materials, configurations, and applications intended for use in systems subjected to enriched oxygen atmospheres.

One area of special interest was the cleaning of materials to remove organic residues that combust, and can even explode, if contacted by pure oxygen. Two standards were developed to address this area of concern:

Formation Of The ASTM E55 Committee

ASTM Committee E55 was formed in 2003, originally under the title Pharmaceutical Application of Process Analytical Technology, with a goal to improve efficiency, process control, safety, and, ultimately, product quality and public health. In 2006, E55 expanded to address all aspects of pharma, changing to its current title, Manufacture of Pharmaceutical Products. The vision of the E55 Committee is to create a portfolio of science-based and risk-based consensus standards that describe sound scientific frameworks to facilitate pharmaceutical development, manufacture, and adherence to quality and performance criteria across the product life cycle.

The E3106 Standard Guide For Cleaning Process Development And Validation

One such science- and risk-based consensus standard that first began development in 2007 was the currently published E3106, Standard Guide for Science-Based and Risk-Based Cleaning Process Development and Validation.4 This standard is very focused on the development of cleaning processes and emphasizes the use of bench-scale testing. In the E3106 standard, laboratory scale, or bench-scale, studies are noted as providing valuable sources of cleaning process knowledge and cleaning process understanding. Such bench-scale studies can be quick, economical, and provide useful information on how difficult a product is to clean, which cleaning agent provides optimal cleaning, which cleaning input variables are critical, and whether dirty hold time studies at commercial scale may be necessary. Cleaning process knowledge and understanding gained from bench-scale studies may be directly applicable to full-scale cleaning processes. This important information is typically gathered through "cleanability testing."

The concept of "cleanability" is defined in the ASTM E3106 standard as the "relative difficulty for cleaning a piece of equipment, product or device." In the past, cleanability has been determined in a number of ways that have been shown not to be scientifically sound, such as based on solubility, potency, viscosity, toxicity, or combinations of these factors.5 The E3106 standard recommends that cleanability be measured through bench-scale testing. Such cleanability studies have been conducted by spiking residues onto coupons and then subjecting these coupons to varying cleaning parameters. These studies may also be conducted in small-scale equipment designed to simulate the actual manufacturing equipment.

In 2017, during a routine internet search, the G121 standard came up in the results, which immediately sparked interest. Further exploration of the G121 quickly led to the discovery of the existence of G122. These standards were obtained from ASTM and upon careful examination were found to be very similar to the cleanability testing already being done in the pharmaceutical and medical device industries. As noted above, these two standards published by ASTM for the determination of cleanability have existed since 1993. However, these standards were developed for use in the oxygen service industry, not for pharmaceutical or medical device products. Regardless, they have been used informally by some companies for that purpose.

The author contacted the E55 Committee Manager and the G04 Committee Manager and Sub-Committee Chair and proposed making updates and expanding the scopes of the G121 and G122. The idea of collaboration between the two committees on updating these two standards was presented to the G04 Committee and was enthusiastically accepted. The G04 Committee asked the E3106 team to submit a high-level outline of the proposed additions or any modifications. The overview provided included a change of scope, additional test procedures, and additional statistical analysis. Since ASTM strives to avoid duplication of efforts of its members, this collaboration idea was quickly approved.7

So, from 2017 to 2020, the E55 and the G04 committees collaborated to update both standards and expand their scopes to include pharmaceutical and medical devices and to incorporate typical pharmaceutical and medical device practices as well. The G121 was updated, balloted, and approved at the G04 Sub Committee. It was then balloted and approved at the G04 Main Committee and became available in 2018. The G122 was similarly balloted and approved and became available in 2020. These updated standards are now available from the ASTM website (www.astm.org).

Overview Of ASTM G121, Standard Practice For Preparation Of Contaminated Test Coupons For The Evaluation Of Cleaning Agents

The G121 describes the procedure for the preparation of single- and double-sided contaminated test coupons for the evaluation of cleaning agents. It is now applicable to the evaluation of cleaning agents/processes proposed for the cleaning of oxygen equipment, pharmaceutical manufacturing equipment, and medical devices after manufacture. It also is applicable to other systems where contamination is a concern.

G121 provides guidance on the preparation of test coupons (Figure 1). 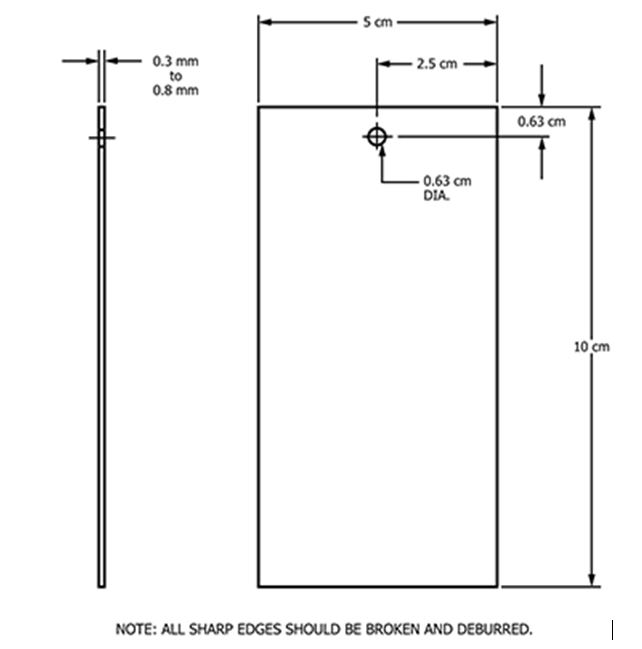 Figure 1 – Example Coupon For Cleanability Studies From ASTM Standard G1212: Test coupons should be numbered in a manner that prevents removal during testing. A specified area of the test coupon may be designated as the test area where the test material is applied. Test coupons may be of different test area dimensions than shown in the example (e.g., 5 cm x 5 cm, 10 cm x 10 cm) depending on the test procedure they are used in. (Reprinted from ASTM G121-18 "Standard Practice for Preparation of Contaminated Test Coupons for the Evaluation of Cleaning Agents", copyright ASTM International, 100 Barr Harbor Drive, West Conshohocken, PA  19428, USA, www.astm.org.)

Overview Of ASTM G122, Standard Method For Evaluating The Effectiveness Of Cleaning Agents

The G122 standard method covers a procedure for evaluating the effectiveness and capability of cleaning agents to remove contaminants to the desired level. G122 now includes removing drug residues from manufacturing equipment and residues from medical devices (ASTM E3106) as well as systems for oxygen service.

G122 provides specific guidance on the test procedure, calculations, and statistical evaluation of the data. The test method starts with a set of at least three coupons that are cleaned and weighed and their weights recorded. The compound or product being tested is applied to the coupons and reweighed as per G121 (Figure 2). As per G122, the coupons are immersed in a test solution (cleaning agent) at a specified temperature, agitation, and period of time (Figure 3). The cleanability test is performed either immediately after application or after drying the coupons for a period of time. After the test, the coupons are dried and reweighed. The difference in weight before and after the test is calculated. 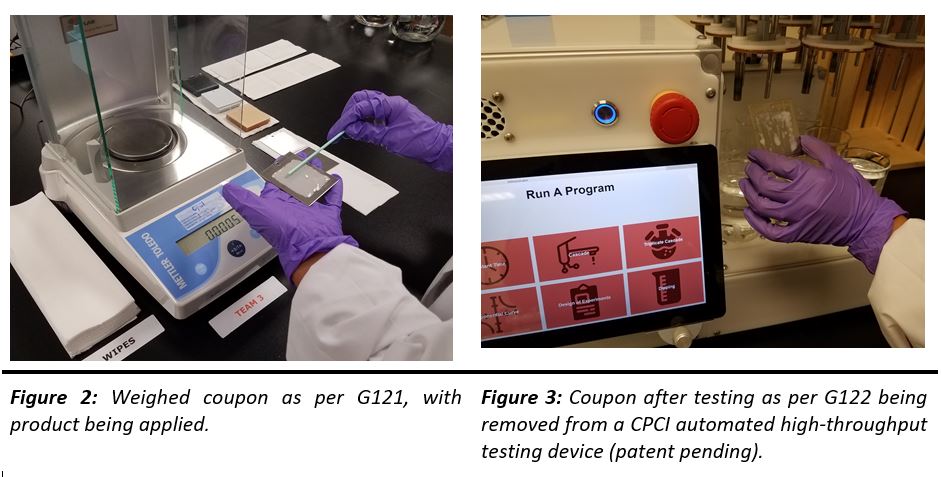 Based on the data from the change in weight in the coupon, a "cleaning effectiveness factor" (CEF) is calculated. The CEF is the fraction of contaminant removed, or remaining, from an initially contaminated test coupon and is determined using gravimetric data or other analytical techniques (e.g., total organic carbon analysis, etc.). Equation 1 shows how to measure the contaminant remaining.

The cleaning effectiveness factor indicates the fractional contaminant that remained after cleaning.

Alternatively, the amount of material removed may be calculated (Equation 2).

In this example the CEF is 0.371, or 37.1 percent of the product remained on the coupon after the test. The CEF is typically an average of a minimum of three analyses.

While the concepts of cleanability and cleanability testing are not new, their use in the manufacture of pharmaceutical and medical devices is relatively new and their use had not been implemented in a standardized manner. The update and publication of two ASTM standards now provides the pharmaceutical and medical device industries with approved consensus standards to accelerate the implementation of science-based and risk-based approaches to the development of cleaning processes.