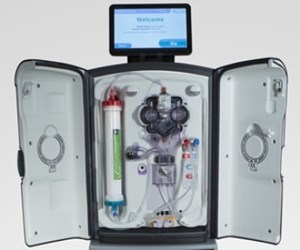 Co-developed with DEKA Research & Development Corporation, the VIVIA system features an integrated water purification module, safety sensors, and one-button fluid infusion, plus Baxter's SHARESOURCE web-based remote monitoring technology for nephrologists and nurses. VIVIA is for investigational use only in the U.S. and is CE-marked in Europe.

"Less than two percent of U.S. end-stage renal disease patients have access to home hemodialysis," said Jill Schaaf, CVP and president, Baxter Renal. "This clinical trial is an important step in Baxter’s efforts to expand access to therapies for patients who require dialysis. Working alongside the renal community, Baxter will continue to build support for the acceleration of home dialysis programs including addressing reimbursement and low awareness of therapy options among patients and clinicians."

The majority of U.S. adult dialysis patients receive hemodialysis treatments three times a week, for four to five hours per session, at a center or clinic. But the growing incidence of end-stage renal disease (ESRD), as well as patient preference for more convenience and control over treatment, could pave the way for more home dialysis.

Baxter claims that High Dose HD therapy — which is done five days per week for less than four hours per session during the day, or as six-hour overnight sessions while the patient sleeps — is associated with more favorable survival and clinical outcomes, including health-related quality of life, compared with conventional, in-center hemodialysis.

With VIVIA for home hemodialysis, Baxter now has both dialysis modalities for home treatments covered. Its peritoneal dialysis (PD) machine, AMIA APD cycler with SHARESOURCE, was granted 510(k) clearance by the U.S. Food and Drug Administration (FDA) in October. Baxter also collaborated with DEKA on the AMIA machine.

But even Fresenius recognizes that the home dialysis market is expanding. In order to compete with upstart NxStage Medical, Fresenius in 2011 also entered the home HD market with its 2008K@home dialysis machine, a downsized version of its 2008K in-center counterpart. The company is currently working with Swiss medical device developer Debiotech SA to develop more lightweight and compact peritoneal dialysis machines, and also is developing new HD machines based on sorbent technology.

The home dialysis segment is about to heat up further, as medical device giant Medtronic enters the market with its newly-created Renal Care Solutions. As a foundational component to the business, it recently bought Italian-based company Bellco, which has a full line of dialyzers and chronic and acute dialysis machines.