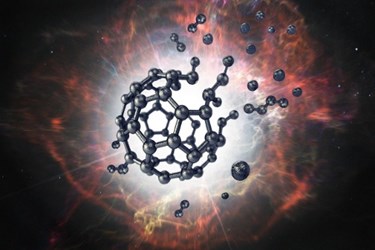 Chemists have devised a way to create a controllable explosion by manipulating buckyballs — carbon molecules with a hollow, spherical structure that resembles a soccer ball. Researchers believe that this nanoscale chemical reaction could provide a cellular-level attack on cancer cells without harming the surrounding healthy tissue.

Buckyballs, also known as buckminsterfullerine, were first discovered in 1996. These fullerene molecules are composed of 60 carbon atoms linked together to form a strong cage-like structure. When introduced to 12 nitrous oxide molecules, the carbon atoms blast apart and attach themselves to the oxygen atoms, forming carbon dioxide groups on the buckyball’s surface. The buckyball then disintegrates.

According to a University of Southern California (USC) news release, this chemical reaction provides a controlled explosion and a blast of intense heat. If this reaction were to occur inside a cancer cell, researchers say the process could kill the cancer while leaving surrounding tissue intact.

The USC team, led by chemistry professor Oleg Prezhdo, published a report detailing their explosive technique in The Journal of Physical Chemistry Letters.

“Energetic materials, such as explosives, propellants and pyrotechnics are widely used in civilian and military applications, and nanoscale explosives represent a special group because of the high density of energetic covalent bonds,” the study authors wrote in their abstract. “The study shows that the initiation temperature and released energy depend strongly on the chemical composition and density of the material.”

The scientists started with buckyballs because of familiarity and their stability, though Prezhdo believes the process could be applied to other kinds of carbon structures, like carbon nanotubes.

Earlier this month, a team from the Max-Planck Institute in Germany combined buckyballs with glucosamine, and found that the resulting bonds could reduce the cell damage and inflammation that occurs after a stroke, according to an article published in Sinc.

Rather than exploding like the buckyballs in the USC methods, the German’s experiments on rat models found that bonding fullerenes with sugars “combine their protective effects,” said Guillermo Orts-Gil, a researcher at Max-Planck and co-author of the research, which was published in Experimental Neurology.