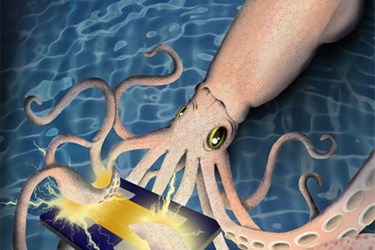 A team of researchers at the University of California, Irvine (UCI) has discovered that a protein called reflectin, which is naturally present in squid skin, is a conductor of positive electrical charges — a quality that could be relevant for future medical device applications.

“Nature is really good at doing certain things that we sometimes find incredibly difficult,” Alon Gorodetsky, an assistant professor of chemical engineering and materials science at UCI and lead researcher on the project, said in a press release published recently on the university’s website. “Perhaps nature has already optimized reflectin to conduct protons, so we can learn from this protein and take advantage of natural design principles.”

Gorodetsky and the rest of the research team produced the squid protein in common bacteria and then used it to make a thin film on top of a silicon substrate. After attaching electrodes to the film, they tested the protein’s electrical properties and concluded that it transported protons almost as effectively as most artificial materials currently available, according to the press release.

Researchers involved with the project said that reflectin has a number of advantageous qualities that make it relevant for biologically inspired devices. Because reflectin is a soft biomaterial, it could be used to conform to flexible surfaces and may be less likely than other types of materials to be rejected by the human body. Additionally, the protein could be engineered to decompose when it is no longer needed.

“We plan to use reflectin as a template for the development of improved ion- and proton-conducting materials,” said Gorodetsky. “We hope to evolve this protein for optimum functionality in specific devices — such as transistors used for interfacing with neural cells — similar to how proteins evolve for specific tasks in nature.”

Details regarding the project have been published recently in the journal Nature Chemistry.

This project is not the first time researchers have explored the possibility that squid could provide solutions for better ways to fuel and build implantable medical devices. Researchers at Carnegie Mellon University, for example, had previously worked with cuttlefish, a close relative of the squid, to develop biologically compatible ways to charge ingestible or implantable medical devices.