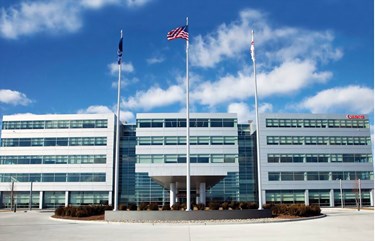 Toshiba has completed an agreement to divest its medical devices unit, electing to sell to Canon after two aggressive rounds of bidding. If the deal is approved by authorities, Toshiba will secure a much-needed $5.9 billion in capital to continue with its restructuring efforts, and Canon will substantially expand its healthcare offerings.

Following weeks of speculation that FujiFilm was the most likely buyer, Toshiba surprised the industry by announcing that Canon had been granted exclusive rights to negotiate the purchase of Toshiba Medical Systems Corporation (TMSC) last week.

With $3.6 billion in revenue last year, TMSC is one of Toshiba’s most profitable businesses, and analysts have said that its quick sale was in the best financial interests of the company. Toshiba recently widened its annual loss forecast to $6 billion, and Bloomberg reported that the costs of the company’s long-term restructuring strategy were rising faster than anticipated.

On Wednesday, FujiFilm wrote a letter to Toshiba, voicing concerns that Canon’s win came too quickly and the deal may not follow Japan’s anti-monopoly laws, reported Reuters. Toshiba has not yet responded to the letter and, instead, the company announced a finalized agreement with Canon, one day ahead of schedule.

“We are left with an impression that the deal went through a process that was exceedingly tricky and aimed at buying time,” said Takao Aoki, spokesman for FujiFilm, to Bloomberg. “If this is to be accepted, this raises concerns that competition laws are just a facade.”

Damian Thong, an analyst at Macquarie Group in Tokyo, does not anticipate any holdup. “There is no reason to believe that the selection process wasn’t fair and that Canon is paying an unfairly low price,” argued Thong.

Toshiba announced in a press release that assets from TMSC, which include X-ray systems, diagnostic ultrasound, radiation therapy systems, computed tomography (CT) and magnetic resonance imaging (MRI) equipment, would transfer to an independent third-party company, MS Holding, until the agreement with Canon is finalized.

Canon’s current business focuses on cameras and office equipment, but its healthcare offerings already include radiography and ophthalmic equipment. Canon’s purchase of Toshiba’s medical imaging equipment will launch the company into competition with market leaders, including GE, Philips, and Siemens, said Bloomberg.

By spurring growth in a lucrative market, Canon would offset its profit losses sustained in recent years in camera manufacturing, which has dwindled in the advent of high-quality smartphone cameras, commented Bloomberg.