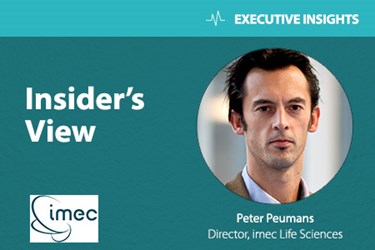 The healthcare arena is on a clear path towards preventative and personalized medicine.  Measurements of health status are essential in advising patients and healthcare professionals on the most appropriate preventive or curative measures. However, our ability to measure our health status is hampered by the complexity of instrumentation required to acquire that data, and by the complexity of the analysis required to turn that data into actionable information.

But, semiconductor technologies have excelled at making extremely complex instrumentation and data analytics available to consumers at the lowest possible cost. I believe we can tune semiconductor technology such that we can benefit from its power in enabling health measurements anywhere, anytime, by anyone, and at very low cost.

Just look at the Apple A9 chip used in the latest iPhones: It contains more than three billion transistors. That’s pretty impressive on its own — but when you look at its price of around $22 U.S. dollars, it becomes even more remarkable. For decades now, the chip industry has succeeded in offering more and more functionality at increasingly low prices. It is our aim to bring the enormous power of silicon-based chip technology to the life sciences, too.

First and foremost, silicon-based chip technology makes medical instruments smaller and less expensive. In doing so, it makes such devices more accessible to consumers. A good example of this is our project in which we integrate an entire medical laboratory onto a chip measuring just a few square centimeters (cm²). The chip will be capable of analyzing the molecules or cells contained in body fluids (DNA, proteins, viruses, blood cells, etc.) autonomously. This will make it possible to carry out sophisticated tests quickly in places where it was previously impossible: In the hospital ward, at a doctor’s practice, and even in the patient’s home. Continued development of this technology could lead to mainstream, inexpensive DNA tests.

A second reason to bring chip technology to the life sciences is to increase the speed or throughput of medical instruments. Imagine if you were able to read, or sequence, DNA using a chip. It would then become possible to integrate a large number of these sequencing components onto a small area, enabling high-throughput DNA sequencers.

Another great example of chip technology bringing smaller and faster instruments to the life science arena is a new prototype chip called a cell sorter. It’s a device of only 4x2 cm that can analyze a milliliter of blood (e.g. searching for circulating tumor cells). The blood sample flows through a microfluidic channel and, one by one, cells pass over an imager while being illuminated by a laser. Then, based on the holographic image on the sensor, a powerful computation chip reconstructs an image of each individual cell, thanks to lens-free microscopy technology.

The cell is then identified (e.g., as a tumor cell or a white blood cell) and if it is a type that needs to be investigated, it is separated in a distinct microfluidic channel. This is done with the help of steam bubbles generated by miniaturized heating elements in the different output channels, where the live cells are collected for further examination. Such a high-throughput cell sorter chip could be used by medical doctors to do complicated tests on the fly, such as screening blood cells in a patient’s blood sample.

Think of a cancer specialist, who would immediately be able to see if a patient has tumor cells within their blood, or is able to determine if a chemotherapy patient’s treatment should be continued or modified after checking the blood for remaining tumor cells. The cell sorter chip also makes it possible to see if a patient’s blood is contaminated by specific bacteria, allowing doctors to start a targeted treatment immediately.

Chip technology is also of interest for cytometric devices (counting and examining cells), either because the devices themselves can be made smaller and more compact, or because their throughput is enhanced. Counting and examining cells may be of value, for instance, in following up leukemia treatment: A disposable chip can be used to quickly count the number of blood cells so that the doctor can tell the patient — on the spot — whether the treatment is working.

Another application is cell therapy in which human cells are used as medicine. One risk with this treatment is that wrongly programmed cells might be injected inadvertently, which could lead to tumor formation. Cytometric devices are needed to check all of the to-be-injected cells before they are administered to the patient. Thanks to chip technology, this can be done faster, better, and at lesser cost.

Following the famous Moore’s Law, chip technology evolves at a very fast pace. The focus is on developing ever smaller building blocks for the chips, making them faster and more energy efficient. Today’s most advanced chips are made in 20 nanometer (nm) and 14 nm technologies. For the life science applications mentioned above, research centers such as imec are using much ‘older’ technologies, namely 180 nm and 130 nm technology.

This year, imec will go a step further and test more scaled chip technologies. At present, no one knows what these more advanced chip technologies might mean for medical instruments. After all, if the ‘old’ technologies already mean such a revolution for equipment manufacturers, doctors, and patients, it will be exciting to see what the newer technologies will bring to detection and treatment.

Peter Peumans is the director of the bio- and nanoelectronics department where he leads imec's life science activities. Prior to joining imec, Peumans was a professor of electrical engineering at Stanford University, where his work focused on large area electronics, solar energy conversion, and biomedical electronics. Peumans holds a Ph.D. in electrical engineering from Princeton University, and a bachelor’s and master’s degree from the University of Leuven. He is also the recipient of an NSF CAREER award and a Belgian-American Educational Foundation honorary fellowship.