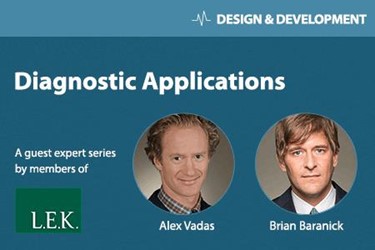 A minimally-invasive diagnostic that can help clinicians detect, diagnose, and manage cancer patients has long been the dream of many healthcare practitioners. Over the past few years, highly sensitive molecular technologies — primarily Next Generation Sequencing (NGS) and digital PCR (dPCR) — have enabled researchers and clinicians to detect the presence of cancer genomic material (circulating tumor DNA, or ctDNA) in peripheral biofluids, such as blood.

The field known as liquid biopsy was born on the backs of these novel molecular technologies. But liquid biopsy is not limited to ctDNA, and may include detection of other cancer-derived particles, including exosomes harboring tumor RNA and circulating tumor cells (CTCs).

Despite all the press and hype, the term liquid biopsy often is used without a precise understanding of its different applications and technological approaches. This article lays out the key clinical applications, describes the various liquid biopsy technologies, and highlights some of the companies turning this dream into reality.

While therapy guidance is the leading application today, monitoring and early detection are expected to represent the most sizable and impactful applications in the future. Early detection has the potential to down-stage cancer detection, enabling definitive intervention (e.g., full tumor resection), and could become a routine health check, similar to mammograms or colonoscopies. Monitoring applications are myriad and have the potential to reduce the current dependence on imaging, as well as potentially detect recurrence or resistance earlier than traditional approaches, again enabling earlier intervention or changes in management.

In aggregate, analysts estimate the market potential for liquid biopsy applications to represent tens of billions of dollars, making liquid biopsy one of the most scalable opportunities diagnostic companies have encountered in decades. 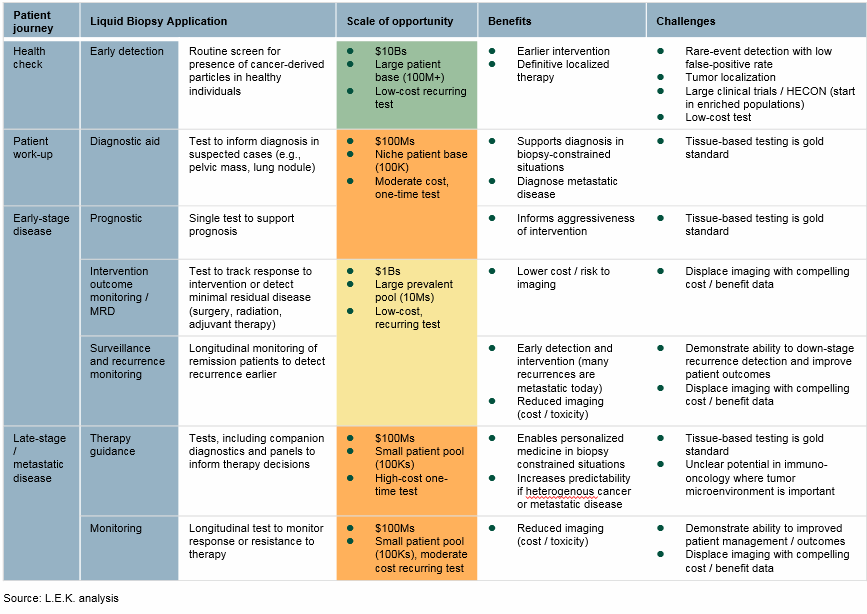 Central to liquid biopsy techniques is the capture and analysis of tumor-derived particles, which may include nucleic acids, proteins, exosomes, nucleosomes, and cells. Since tumors divide, die, communicate, and migrate, it is possible to find traces of their existence in biofluids. However, since these tumor-derived particles are typically rare, analytical approaches require very high sensitivity (NGS or digital PCR) or upfront enrichment (e.g., CTC cell capture).

There are multiple technologies used in liquid biopsy (enrichment and analysis), and it appears diverse approaches (and combinations thereof) may be required to address the breadth of potential applications (Fig. 2). Amongst all techniques, the combination of deep sequencing ctDNA using next-generation sequencing (NGS) represents the majority of current activity, but targeted (qPCR, digital PCR) approaches to measuring ctDNA also are being leveraged.

Beyond ctDNA, there is also significant activity in capturing and analyzing exosomes (vesicles involved in cell messaging), nucleosomes (chromosomal DNA packaging units), and circulating tumor cells (CTCs), as these contain a broader selection of tumor-derived analytes — including DNA, RNA, and proteins — and may bring deeper insight into cancer biology versus ctDNA alone. While not based on detecting tumor-derived particles, capturing and analyzing immune cells is also emerging as a complementary technique in liquid biopsy and may be relevant in early cancer detection, as well as guiding and managing patients on immuno-therapy. 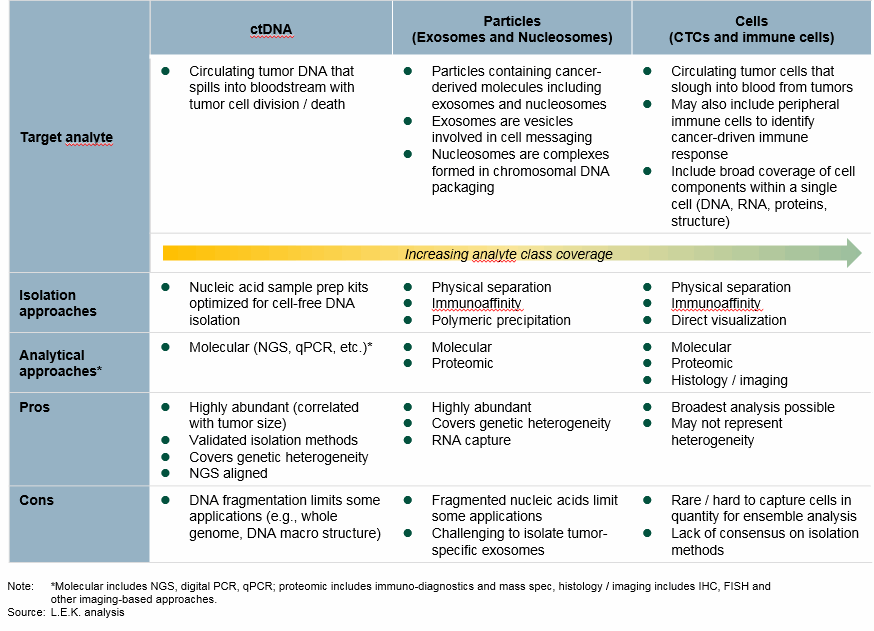 The Competitive Landscape Is Broad And Dynamic

To date, we have identified over thirty different liquid biopsy competitors (Fig. 3). While each competitor may have unique differentiators and offerings, we have attempted to categorize them into distinct segments based on a mix of technique/technology and current application focus.

Looking across the competitive landscape, we define the following clusters:

Competitors in this segment are expected to differentiate with clinical data to support test utility. Clinical studies for the general screening population are likely to be massive is (~100K patients) in scale and require significant longitudinal analysis.

Grail is the poster child in the early detection space, having raised $1B in VC funding and recently embarked on a 120,000 patient study for early breast cancer detection. Many others are eyeing the early detection space, and some may ease their way into the general population applications through trials in at-risk patients, or as a reflex to other screening methods (e.g., low-dose CT, fecal occult blood).

Many traditional oncology diagnostics companies (e.g., Roche, Qiagen) have targeted single-gene tests based on PCR in the therapy guidance space, including regulated kits for companion diagnostic biomarkers such as EGFR. Players in this space also are likely to transition into monitoring applications for tested patients (looking at resistance or recurrence in treated metastatic patients). 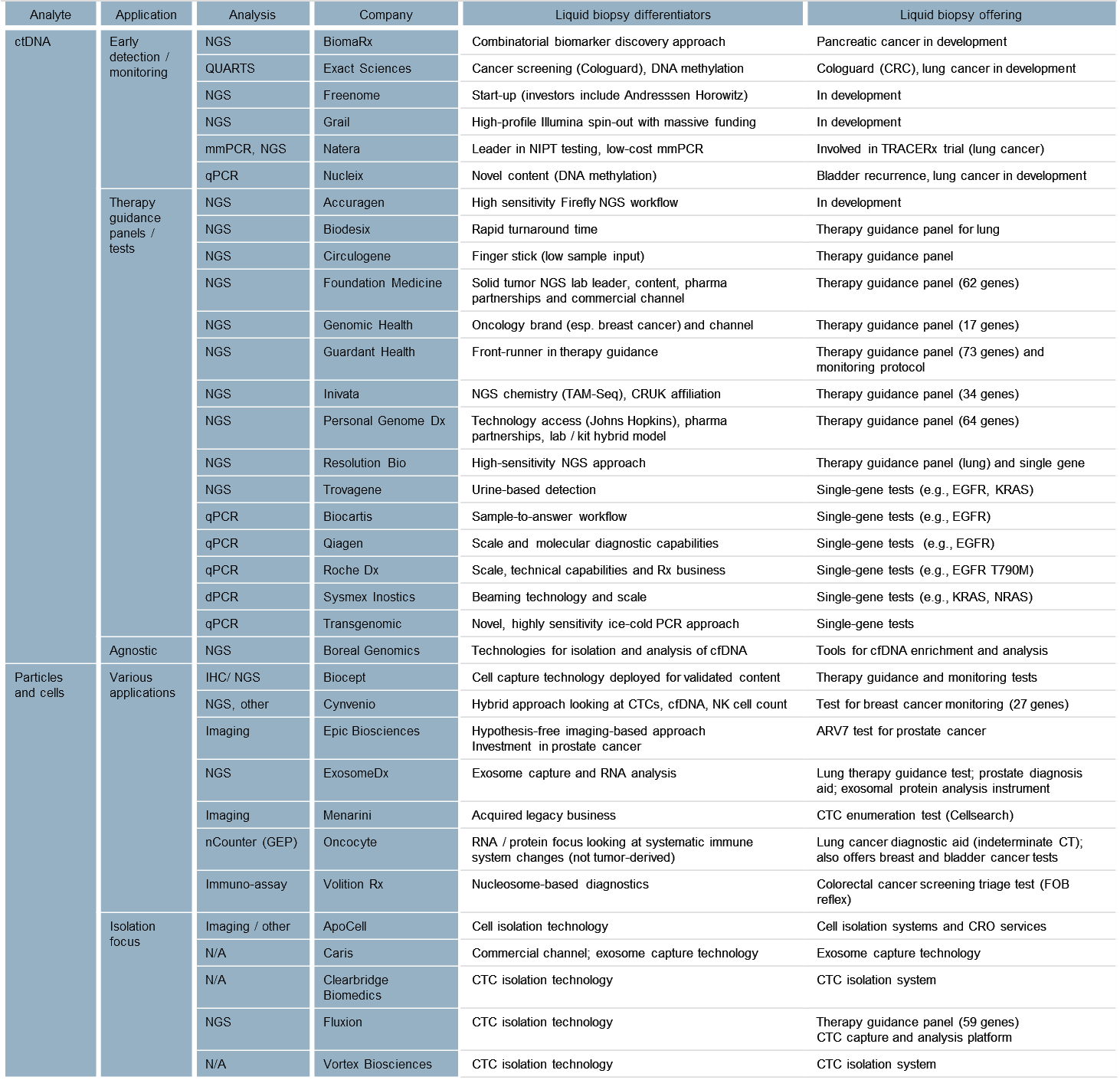 The market opportunity associated with liquid biopsy represents one of the largest and most dynamic diagnostics/healthcare opportunities. While we are excited about the market potential and clinical utility, we urge pharma stakeholders, tools companies, diagnostic developers, and other market stakeholders to carefully consider the impact liquid biopsy may have on the oncology landscape, and what it will take to play and win.