The current definition of a combination product, according to the Code of Federal Regulations (CFR), is a product that involves a medical device and/or a drug and/or a biologic — combining any two of these product categories, and sometimes even all three.

The best-known example of a combination product is the drug-eluting stent (DES), which is a scaffold coated with a drug to prevent scar tissue from growing in an artery. However, the DES is a very simple example. The quintessential example of a combination product is what we're starting to see in the areas of tissue engineering (what some people refer to as regenerative medicine) and biomedical nanotechnology.

What Isn’t A Combination Product
Incorporating two (or more) products from the same category, on the other hand, is not considered a combination product.

One thing that has always driven me nuts about the way we practice medicine is that we have to wait until a patient swallows a pill to determine whether that drug is going to work. I would like to know, with a very high degree of certainty, whether or not that pill is going to work in that patient before giving it to them. If it's not going to work, I'm not going to give it to them. I'll give them something else.

With companion diagnostics — a few of which are now on the market — we can actually answer that question. Based on either the patient's genome or their biochemistry, or a combination of the two, we can achieve a pretty reasonable level of certainty about whether or not that particular medication is going to work in that patient, before we give it to them.

Probably the best-known companion diagnostic is for the commonly used anticoagulant drug Plavix, which prevents thrombus, or blood clots, in patients who are susceptible to heart attacks and ischemic strokes. Plavix works very well for a relatively small number of people, but for others, it doesn't work at all. And for some, it actually can be dangerous. For obvious reasons, it’s important to know which group the patient falls into, before giving the drug to them. Now we have the ability to do that, and we're starting to do it with other drugs as well.

From a regulatory perspective, companion diagnostics are interesting, because they are viewed as a combination product in some parts of the world, including the United States. The FDA sometimes considers them cross-labeled combination products, where the drug and diagnostic are packaged separately but have labels that point to one another.

Advantages Of Developing Combination Products
Approximately one-third of all medical products under development today are combination products. According to data published by Research and Markets, the drug-device combination products segment alone will grow to $115 billion by 2019. This is clearly an area of rapid growth and great opportunity for medical device makers.

Absolutely not. The best outcome we can hope for at this point is to prevent that problem from getting worse. In medicine, we call this a palliative treatment. In the absence of something better, a palliative treatment is fine. The problem is that we have faced this limitation in medicine for decades. It's about darn time we get past it.

It impacts the business side, as well. With issues like health economics and reimbursement becoming much more important, the ability to justify higher margins for our products — through improved outcomes — is a huge competitive advantage.

Overcoming Knowledge Gaps Between Disciplines
For those who have worked exclusively in the device industry, getting involved with combination products will definitely force you out of your comfort zone. You will need to be willing to learn about, and talk to people from, the drug and the biotech side.

This is no easy feat, since many design engineers look at the world from a strictly mechanical or electrical perspective — from an F = MA (force = mass x acceleration) perspective, you could say. Molecular biologists, on the other hand, look at the world from an A, T, G, and C (representing the four nucleobases in your DNA) perspective. There's not a lot of overlap between F = MA and A, T, G, and C. (Of course, there is an "A" in both, but it doesn’t stand for the same thing!)

For most people, that's a real challenge. I remember going into medical device companies 20 years ago, trying to convince them of the merits of doing gene therapy using a stent as a delivery system, and they didn't even know what a gene was. On the other hand, I would go into a biotech company to try to convince them of the exact same idea, and they didn't know what a stent was. There were huge knowledge gaps between the two disciplines.

We are slowly trying to close those gaps, but it's taking a very long time. I think this — more than the science, more than the engineering, more than the regulation, more than the intellectual property or anything else — is the single biggest challenge. We are making progress, but not very quickly.

Navigating An Ambiguous Regulatory Path
Another major hurdle device makers will need to clear in bringing a combination product to market is navigating the available regulatory pathways. When it comes to combination products, the FDA has been following what I call the silo model. It has one silo for medical devices (CDRH), another for drugs (CDER), and a third for biologics (CBER). In the past, this model worked reasonably well.

In regulatory science, we determine the appropriate silo for a product by using a concept called the primary mode of action, or PMOA. Basically, we attempt to figure out the most important way a particular product achieves its intended usage, or its action.

For example, a device maker argued successfully that the PMOA for a drug-eluting stent is the mechanical holding open of an artery. The action of the drug was secondary, in the sense that it merely helps keep the artery open in the future. Since the PMOA is mechanical, the drug-eluting stent is considered a device, and thus falls in CDRH’s jurisdiction.

In cases like the drug-eluting stent, where the PMOA of the combination product is reasonably clear, the decision about what regulatory path to take — that is, the applicable FDA branch — is relatively easy. However, the decision becomes much more difficult when you start looking to the future, to more complicated types of combination products, like those in the areas of tissue engineering and nanotechnology.

Like it or not, that's the first question we must ask under the current regulatory paradigm. And I believe this system is really holding us back, both as an industry and as a society. In the absence of a well-defined regulatory pathway, most companies — especially small companies that are privately funded by venture capitalists or angel investors — are very hesitant to take the risk and pursue a new technology. That's very unfortunate.

Many people believe that the more regulation we have, the less innovation there will be. I understand why they feel that way, but it doesn’t have to be the case. In my opinion, it is possible to have really great innovation and regulation simultaneously. However, the solution is not to create more regulation, but rather to get people to start thinking outside the regulatory box (or silo).

Regulatory Strategy: Get It Classified As A Device
Until then, all combination products must continue to go through CDRH, CDER, or CBER. As a combination products manufacturer, which pathway should you pursue? My standard advice is to argue that your combination product’s PMOA is mechanical — almost regardless of the type of combination product you’re working on — because most people would concede that CDRH is the easiest regulatory path through the FDA. While CDRH’s review process isn’t exactly easy, it is certainly easier than CDER or CBER, relatively speaking.

Will you always win the argument that your device has a mechanical PMOA? Probably not, but you will never know unless you try. If you lose the argument, what have you lost? Absolutely nothing. If you win the argument, on the other hand, you will have accomplished a huge objective, and that is having CDRH sitting at the head of the table.

Believe it or not, I successfully argued to the FDA that a drug-biologic combination product — without an obvious medical device component — primarily acted in a mechanical way and, as a result, should be regulated as a medical device. You’ll never hit a home run if you don't swing the bat!

A New Paradigm For Medicine
For the reasons previously discussed, combination products are something that everyone in the medical device industry should get excited about. Not only do they present new business opportunities, but they can also help us change the bigger picture, from a societal perspective. With combination products, we can move beyond merely creating another “me too” product — the next iteration of a catheter, a stent, or even a pill — to really change the ethos of how we approach medical problems.

Dr. Drues is also teaching a two-part online course on combination products on April 3 and April 10, 2014. These interactive sessions will dig much deeper into the clinical and business benefits, the regulatory issues, and ways to overcome the challenges associated with combination products. Register today at www.lifesciencetraininginstitute.com. 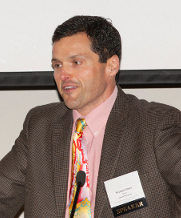 Michael Drues, Ph.D., is president of Vascular Sciences, an education, training, and consulting company offering a broad range of services to medical device, pharmaceutical, and biotechnology companies. He has worked for — and consulted with — leading medical device, pharmaceutical, and biotechnology companies ranging in size from start-ups to Fortune 100s.

Drues works on a regular basis for the U.S. Food and Drug Administration (FDA), Health Canada, the U.S. and European Patent Offices, the Centers for Medicare and Medicaid Services (CMS), and other regulatory and governmental agencies around the world. He is also an adjunct professor of medicine, biomedical engineering, and biotechnology at several universities and medical schools, teaching graduate courses in regulatory affairs and clinical trials, clinical trial design, medical device regulatory affairs and product development, combination products, pathophysiology, medical technology, translational medicine, and biotechnology.

He received his B.S., M.S., and Ph.D. degrees in biomedical engineering from Iowa State University.

You can reach him at mdrues@vascularsci.com or on LinkedIn.