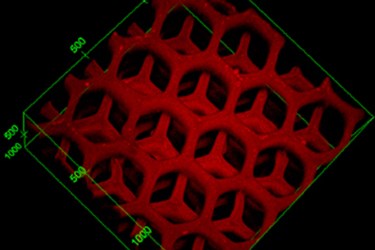 Researchers at the University of California, San Diego’s Jacobs School of Engineering have used a specialized 3D printing technique to create a device that works like a liver to detoxify blood.

The device utilizes nanoparticles to trap pore-forming toxins that destroy cellular membranes  and pulls those toxins out of an infected patient’s blood.

In previous experiments, engineers at the school successfully created “nanosponges” that served to absorb and neutralize pore-forming toxins. Unfortunately, the clusters of nanoparticles were not effectively digested by the body, meaning they could accumulate in the liver and cause further damage.

In an attempt to solve this problem, the team of researchers produced a 3D printed hydrogel matrix to house arrangements of nanoparticles. The device was designed to operate outside of the body, in  similar fashion to dialysis. By passing blood through the device, the nanoparticles it contains effectively sense, attract, and capture pore-forming toxins, like those resulting from animal bites and stings, according to a press release published recently on the school’s website.

“The nanoparticles can attract, capture and sense toxins, while the 3D matrix with a modified liver lobule microstructure allows toxins to be trapped efficiently,” the team wrote in a report published recently in the journal Nature Communications. “This work provides a proof-of-concept of detoxification by a 3D printed biomimetic nanocomposite construct in hydrogel, and could lead to the development of alternative detoxification platforms.”

Along with representing a possible advancement in the use of nanoparticles for medical purposes, this device could also be an important part of an ongoing attempt to develop new techniques for 3D printing. In order to create the complex 3D microstructures used in this device, researchers had to use a highly specialized biofabrication technique called dynamic optical projection stereolithography (DOPsL).

“The biofabrication technique uses a computer projection system and precisely controlled micromirrors to shine light on a selected area of a solution containing photo-sensitive biopolymers and cells,” said the university’s press release. “This photo-induced solidification process forms one layer of solid structure at a time, but in a continuous fashion.”

Through all of this, Shaochen Chen, nanoengineering professor and lead researcher on the project, believes that his team’s work will open up a larger field of possibilities for both nanoparticles and 3D printed medical devices.

“The concept of using 3D printing to encapsulate functional nanoparticles in a biocompatible hydrogel is novel,” said Chen. “This will inspire many new designs for detoxification techniques since 3D printing allows user-specific or site-specific manufacturing of highly functional products.”