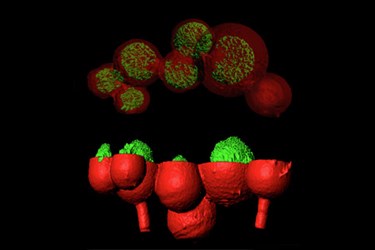 By caging bacteria in microscopic houses, scientists at The University of Texas at Austin are studying how communities of bacteria, such as those found in the human gut and lungs, interact and develop infections.

In a recent experiment they demonstrated that a community of Staphylococcus aureus, which can cause some skin infections, became more resistant to antibiotics when it was contained within a larger community of Pseudomonas aeruginosa, a bacteria involved in various diseases, including cystic fibrosis.

The work was published this week in the Proceedings of the National Academy of Sciences.

The researchers use a novel 3-D printing technology to build homes for bacteria at a microscopic level. Their method uses a laser to construct protein “cages” around bacteria in gelatin. The resulting structures can be of almost any shape or size, and can be moved around in relationship to other structures containing bacterial microcommunities.

The method should enable an entirely new class of experiments that better approximate the conditions that bacteria encounter in actual biological environments, such as those in the human body.

“It allows us to basically define every variable,” said Jodi Connell, a postdoctoral researcher in the College of Natural Sciences. “We can define the spatial features on a size scale that’s relevant to what a single bacterium feels and senses. We can also much more precisely simulate the kinds of complex bacterial ecologies that exist in actual infections, where there typically aren’t just one but multiple species of bacteria interacting with each other.”

The method begins with a gelatin-based reagent that has a few key features. Bacteria can live and reproduce comfortably within it. When warm it’s a liquid solution but at room temperature becomes firm like JELL-O. And it has within it photosensitive molecules that cause gelatin molecules to react and link together when struck by laser light.

The bacteria are put in the solution, and when the solution cools, the bacteria become fixed in place. Connell and her colleagues, including Jason Shear, professor of chemistry, and Marvin Whiteley, professor of molecular biosciences, identify which bacteria they want to cage and in what shape. Then they fire the laser, using a chip adapted from a digital movie projector to project a two-dimensional image into the gelatin. Wherever it focuses, a solid matrix forms.

“Then we do another layer, and another, and so on, building up,” said Shear. “It’s very simple. We’re basically making pictures and stacking them up into 3-D structures, but with incredible control. Think about the thickness of a hair on your head, and take 1 percent of that, and then take about a quarter of that. That’s about the size of our laser when it’s brought to its smallest point.”

After the structure is completed, the bacteria can be fed nutrients and allowed to reproduce within a confined space to a controlled density. The scientists can take other caged microcommunities and put them close enough together for the communities to signal to each other. They can even wash away the excess gelatin, arrest the growth of the bacteria and store them for later transport to labs in other parts of the world.

“What’s key is these structures aren’t just controllable in terms of their geometries; they’re also very bio-friendly,” said Shear. “The walls that we make out of these protein molecules are linked together tightly enough to prevent the bacteria from escaping, but they are porous enough to be chemically permissive. Nutrients can come in. Waste can go out. Signals can be exchanged. They’re trapped in these tiny houses, but they function like they do in biological environments.”

Shear said the new technique should enable a vast range of experiments. Growth can be arrested at any point to do gene expression analyses of bacteria, to see which genes are turned on or off in response to conditions. Multiple bacteria can be forced to interact in different configurations, at different densities, over varying timescales. Bacteria such as Staph and Pseudomonas can be arranged in a “core-and-shell,” with a core of Staph surrounded by a shell of Pseudomonas, to see what happens when they’re both confronted by an unwelcome intruder.

“These are really common bacteria that are often found together in infections, and it makes sense that they would have mechanisms to sense each other,” said Shear. “What the technology allows us to do is put them in conversation with each other, in very precise ways, and see what happens. In this case the Staph sensed the Pseudomonas, and one result was that it became more resistant to the antibiotics.”

Among the long-term goals are to use the insights gleaned from such experiments to better combat infections in humans.

“Think about a hospital, which we know is not a good place to be to avoid infections,” said Shear. “There are studies that seem to indicate that infections are transmitted by very small microcolonies of bacteria, which are likely transported by equipment or staff from one part of the hospital to another. We currently know little about how this is happening. How many cells does it take? Do these microcommunities become particularly virulent or antibiotic resistant precisely because they’re small, and then in turn change the properties of bacteria on our skin or in our bodies? Now we have a means to start asking these questions much more broadly.”

Source: The University of Texas