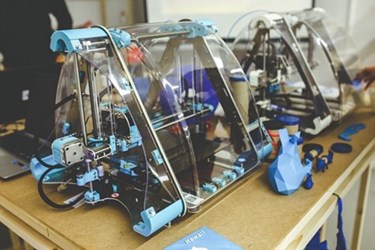 Though many of the top research universities in the country are working to develop 3D printed tissue, experts say that cosmetic companies could lead the charge in developing 3D printed skin. Companies like L’Oreal and Proctor & Gamble plan to use 3D printing as a quicker way to develop artificial skin for product testing, and CNN Money reports that the industry — comprising everything from cosmetics and product safety testing to replacement of damaged or diseased tissue  — could be worth $1B by 2025.

L’Oreal has been developing artificial skin for decades, as a way of side-stepping bans in Europe for products tested on animals. But skin grown in laboratories is a time-intensive process, and effective methods of 3D printing the same skin would take a fraction of the time.

In May, Guive Balooch, global V.P. of L’Oreal’s technology incubator, told The Washington Post that the main appeal of 3D printing was not so much speed, but rather precision.  “L’Oreal’s focus right now is not to increase the quantity of skin we produce but instead to continue to build on the accuracy and consistent replication of the skin engineering process,” Balooch said.

L’Oreal recently announced a partnership with Organovo, a biotech company that has been perfecting its NovoGen BioPrinting Platform for over eight years. The company has achieved early preclinical success in developing 3D printed tissues for human implants.

Aside from its planned applications in L’Oreal’s toxicity and product efficacy tests, the printed skin also could have strong plastic surgery potential for injured patients, Forbes reported last month.

The printing process works by loading a cell solution into a syringe and then slowly squeezing out layers onto a hydrogel substrate that acts as scaffolding for growing cells. Adding additional layers changes the thickness of the skin.

Arnold Bos, an independent technology consultant at Lux Research, told CNN Money that the syringe method allows for a greater variety of engineered and printed skin. “In the syringe format it would be possible to create different skin types,” said Bos. “You can create sensitive skin, or man’s skin.”

According to Bos, L’Oreal still is five years away from 3D printed skin because of the challenge presented by using living cells during the printing process, but he projects that the business, once on its feet, will be worth $1 billion by 2025.

With that large of a market, it’s not surprising that Procter & Gamble (P&G) also has begun submitting research proposals for 3D bioprinting study grants. The Financial Times reported that P&G recently inked a $60 million deal with the Singapore government’s Agency for Science Technology and Research, and has gained access to any of the country’s research institutes.

“Some safety questions are still difficult to mimic with today’s methods and new, additional non-animal alternative methods are needed,” said Lurie-Luke. “3D bioprinting is a promising option for the future.”