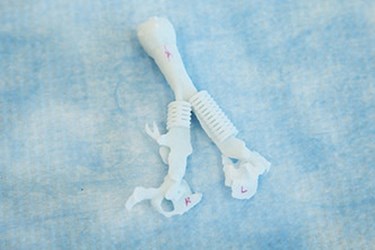 The life of an 18-month-old toddler, Garrett Peterson, may have been saved when doctors at the University of Michigan used a unique 3D-printing technique to construct a device to support the young boy’s weakened windpipe.

Garrett was born with tetralogy of Fallot with absent pulmonary valve — essentially a hole between the lower chambers of the heart — which put extreme pressure on his lungs. This led to the development of severe tracheobronchomalacia, which caused his windpipe to collapse under even the slightest movement or stress.

“Nothing would stop him from turning blue,” Natalie Peterson, Garrett’s mother, said in an article on the University of Michigan Health System website. “Just lifting his legs for diaper change would collapse his airways and that was it. There was nothing we could do to help him.”

Natalie, along with Garrett’s father, Jake Peterson, eventually contacted Glenn Green, associate professor of pediatric otolaryngology at the University of Michigan, and Scott Hollister, professor of biomedical engineering and mechanical engineering and associate professor of surgery, also at UM. In 2013, the duo had created a 3D-printed splint and had successfully implanted it in the chest of an infant named Kaiba Gionfriddo. The splint was designed to help support the baby’s pulmonary system.

After learning about Kaiba’s operation, the Petersons asked Green and Hollister about the possibility of performing a similar procedure on their son.

“In some sense we were thrown directly into the fire,” Hollister said in an article published by NPR. “We characterized it as sort of a Hail Mary pass.”

Green and Hollister took a CT scan of Garrett’s windpipe and used data from the scan to create a 3D model of the boy’s organ. They then used a 3D printer to generate a splint similar to the one used in Kaiba’s operation. The splint was built out of a flexible material and was designed to fit snugly around the weakest parts of Garrett’s windpipe.

You can watch the 3D printing in action below:

“It’s like a protective shell that goes on the outside of the windpipe, and it allows the windpipe to be tacked to the inside of that shell to open it up directly,” explained Green.

So far the operation seems to have been a success and the splint appears to be effective, according to NPR.

The splint is designed to slowly dissolve as Garrett’s windpipe grows stronger. After Kaiba, Garrett is only the second person to receive this type of bioresorbable device, and both Green and Hollister would like to see this technique become a more standard procedure.

“It is a tremendous feeing to know that this device has saved another child,” said Hollister. “We believe there are many other applications for these techniques, but to see the impact living and breathing in front of you is overwhelming.”

As of now, the FDA has not approved the doctors’ technique for regular use. Both Kaiba’s and Garrett’s operations were performed under a special emergency status granted by the agency. For a discussion of the regulatory issues and other challenges related to 3D printing in medicine, read our recent editorial 3D Printing In Medicine: 4 Questions That Need To Be Answered.