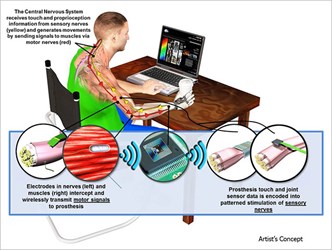 As part of its new Hand Proprioception and Touch Interfaces (HAPTIX) program, DARPA has selected several research initiatives for funding awards. The goal of HAPTIX is to develop prosthetic limbs that feel and function like natural limbs for amputees — veterans in particular. Each recipient in this current round of funding is focused on prosthetic electrodes that interface with a patient’s biology to control or sense the device.

Though advances in robotic prostheses are rapidly accelerating, there is still much work to be done. Effective user control of these prosthetics has been particularly challenging, and a number of methods have been attempted with limited success. Transcutaneous leads that interface with nerves under the skin have been used, as have other designs with leads that sense the muscular twitching in a stump. In addition to conquering the control issues, a relatively recent goal has been to restore a sense of touch to the amputee through sensors that are part of the prosthetic limb.

The new DARPA HAPTIX program actively supports basic research programs dedicated to bringing such advances to practice, according to a recent article National Institutes of Health News and Events. The program is focused on three key areas, according to the program’s Federal Business Opportunities website

Some programs that recently received funding from HAPTIX are focused on implantable peripheral interfaces. These programs include:

The HAPTIX program is focused on developing prosthetic interfaces that occur near the amputee’s limb, generally translating signals that come from the limb into action at the prosthetic. Another approach that is receiving considerable attention is to use mind-control methods that allow a user to control the prosthetic through a brain-machine interface