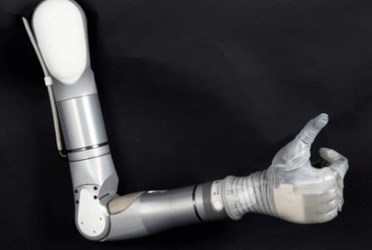 Two years after its FDA approval in 2014, the DARPA-funded LUKE arm is preparing for a commercial launch later this year.  The prosthetic — which uses electromyogram (EMG) electrodes to pick up signals from the patient’s muscles and translate them into precise movements — is priced at $100,000 and will be marketed by Mobius Bionics.

The Life Under Kinetic Evolution (LUKE) arm was invented by Dean Kamen at the DEKA Research and Development Corporation and was funded, in part, by the Defense Advanced Research Projects Agency (DARPA), as part of a $100 million initiative to revolutionize prosthetics.  According to DARPA, the initiative’s goal is to improve the functionality of prosthetic limbs and give servicemen and women who’ve lost limbs the option of returning to active duty.

The FDA approved the LUKE arm, formerly called the DEKA arm system, because of its clinically proven ability to perform tasks — such as cooking meals, brushing teeth, and using keys in locks — that the agency said were not possible with existing prosthetic devices. Christy Foreman, director of the Office of Device Evaluation at the FDA’s Center for Devices and Radiological Health (CDRH), commented that the DEKA Arm System “may allow some people to perform more complex tasks than they can with current prostheses in a way that more closely resembles the natural motion of the arm.”

The idea of a mind-controlled prosthetic is not unique to the LUKE arm, but engineers explained in a press release that the forearm-to-shoulder capabilities and advanced features set the device apart from competition. For example, the LUKE arm system is strong enough to lift a bag of groceries, dexterous enough to grip delicate items without breaking them, and versatile enough to reach overhead or behind the back. The LUKE arm system can be configured for amputees with limb loss at the shoulder joint, mid upper arm or mid-lower arm, but it is not appropriate for patients with amputations at the wrist or elbow.

“Up to this point, design in prosthetic arms has been limited to incremental changes. We developed the LUKE arm to change the game for amputees—creating an innovative, integrated system that offers greater functionality and independence to our wounded warriors and other amputees,” explained Kamen.

Kamen recently made the news with his partnership with Toyota, which seeks to develop a next-generation stair-climbing wheel-chair known as the iBot (also invented by Kamen’s team). The technology was previously pulled from the market in 2009 because of its $26,000 price tag. The cost inhibited Medicare’s ability to offer reimbursement because DEKA was unable to prove how the technology improved upon existing products.

The decisions to relaunch the iBot and push for commercial launch of the LUKE arm follow what some call a “landmark policy decision” by the VA to cover the cost of the $77,000 ReWalk personal exoskeleton for certain qualifying veterans.

According to The Verge, Mobius Bionics will market the LUKE arm system for $100,000. Mobius Bionics currently is accepting names of people interested in purchasing one of the first LUKE Arms, beginning late 2016. The prosthetics will be manufactured in Birmingham, N.Y., by the Universal Instruments Corporation.