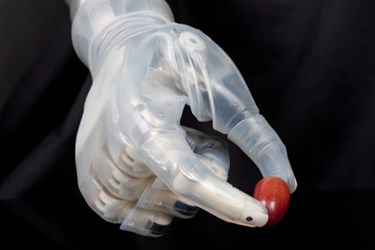 DEKA Research and Development Corporation recently secured FDA approval to market its DARPA-funded DEKA Arm System. The robotic arm is said to be the first device to be capable of making multiple and simultaneous movements through muscle contractions detected by electromyogram (EMG) electrodes.

“This innovative prosthesis provides a new option for people with certain kinds of arm amputations,” Christy Foreman, director of the Office of Device Evaluation at the FDA’s Center for Devices and Radiological Health, said in a news release. “The DEKA Arm System may allow some people to perform more complex tasks than they can with current prostheses in a way that more closely resembles the natural motion of the arm,” she said.

As part of its de novo classification review process, the FDA said that it looked at clinical evidence from a Department of Veterans Affairs study of 36 veterans who used the DEKA Arm System. The study showed that 90 percent of participants were able to perform tasks that were not possible using other existing prostheses. With the DEKA Arm System, they were able to use keys and locks, prepare food, feed themselves, use zippers, brush their teeth, and comb their hair.

The prosthesis can be configured to attach at different levels, including the shoulder joint, mid-upper arm, and mid-lower arm. An onboard computer processes electrical signals from the EMG electrodes in the prosthetic arm system and translates them into distinct movements, including powered shoulder motion and complex wrist articulations. The device has built-in switches and motion sensors to execute movements.

In a press release, DARPA said, “The system allows for simultaneous control of multiple joints using a variety of input devices including wireless signals generated by innovative sensors on the user’s feet. The battery-powered arm system is of similar size and weight to a natural limb and has six user-selectable grips.”