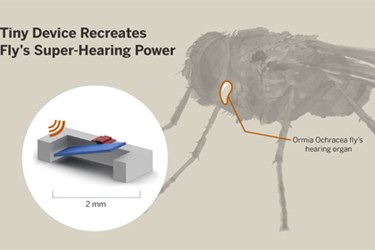 Using a fly as inspiration, researchers at the University of Texas at Austin (UT) have created a miniature device that they say could lead to the development of hypersensitive hearing aids.

The research team focused on the Ormia ochracea fly, which has a highly sophisticated hearing system. Contrary to other animals, insects generally cannot pinpoint sound sources because sound waves essentially hit both of their ears at the same time. The Ormia ochracea fly’s hearing system is different, as it contains tiny, teeter-totter-like mechanisms within the ear system that enable the fly to pinpoint sound sources within two degrees.

The UT team is not the first to focus on mimicking the hearing mechanisms of a fly, but it is the first to introduce the use of piezoelectric materials.

“Because hearing aids rely on batteries, minimizing power consumption is a critical consideration in moving hearing-aid device technology forward,” Neal Hall, an assistant professor in UT’s Cockrell School of Engineering and lead researcher on the project, said in the university press release.

In their project, the UT researchers built a nearly exact replica of the fly’s hearing mechanism. Their tiny silicon device measured 2 millimeters in width and incorporated a flexible beam and piezoelectric materials, making it possible to measure the flexing and rotation of the beam. The measurement enabled the researchers to replicate the fly’s hypersensitive hearing ,while the piezoelectric materials help the device run using very little power.

Details regarding the new device and results from early tests involving the device have been published in the journal Applied Physics Letters.

This project is the latest in a consistently active body of research that attempts to mimic natural biological processes in the creation of medical devices. Researchers at the University of California, Irvine, for example, have recently discovered a protein in squid skin that could be used to power a variety of medical devices. Earlier this summer, Medical Device Online reported on a number of other animal-inspired research projects including one that used spider webs to create biomedical adhesives and another that modeled surgical robots on octopus arms.

Image Credit: Cockrell School of Engineering at the University of Texas at Austin