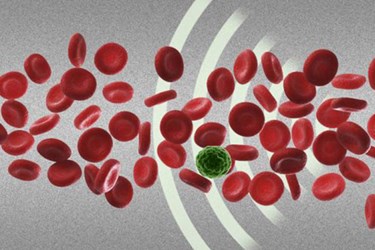 Using gentle acoustic energy, MIT researchers have developed a dime-sized device that may allow detection of cancer cells circulating in the blood stream. In addition to non-destructively separating cells, the new technology may help predict if a tumor is preparing to spread.

Cell separation is an important part of medicine and is used in a variety of applications. Genetic analysis, drug screening, and certain therapeutic decisions all depend on this technology. There are many methods available to do this that center around exploitable differences in cells like cell density, size, stiffness, and electrical impedance. Most of these existing methods, however, require a label or some sort of mechanical interaction with the cells, thus damaging and changing them.

The new method developed at MIT and other institutions is much different.

“Acoustic pressure is very mild and much smaller in terms of forces and disturbance to the cell,” said Ming Dao, a principal research scientist in MIT’s department of materials science and engineering, in a recent MIT News article. “This is a most gentle way to separate cells, and there’s no artificial labeling necessary.”

According to the article, the dime-sized device is composed of a microfluidic chamber that passes fluid containing the cells through it. While the cells are flowing through it, ultrasonic transducers are activated on either side of the fluid path, creating sound waves that interact with each other. As the waves interact, they create standing waves that exist at angles to the flow path. Earlier prototypes had a single standing wave that was parallel to the flow path, and while it demonstrated some efficacy, it was not accurate enough.

In a study published in the Proceedings of the National Academy of Sciences, the team presented results from a modified device. The new device benefited from a change in the angle of the standing waves, along with adding more standing waves along the flow path. This caused multiple interactions with cells as they passed through the path.

With these refinements, the device separated polystyrene beads with diameters of 7.3 microns from others that were 9.9 microns with 97 percent efficiency. In addition, cell solutions containing MFC-7 breast cancer cells were separated from white blood cells with high accuracy that may yet be improved.

“This simple modification dramatically boosts the efficiency of such devices,” said Taher Saif, a professor of mechanical science and engineering at the University of Illinois at Urbana-Champaign, in the press release. “That is just enough to make cells of different sizes and properties separate from each other without causing any damage or harm to them.”