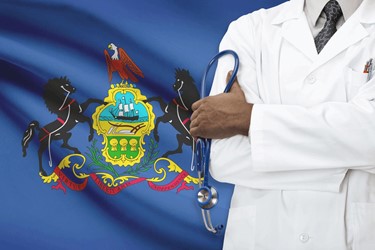 We are often drawn to bright, shiny objects of some sort. People rave about the lights of New York City and the energy of Times Square. Who doesn’t love the weather in Southern California? Every time that I am in Boston, I have to have a delicious lobster roll. And don’t even get me started about Minneapolis’ magnificent Mall of America. It’s natural to appreciate the big things and the “finer” things, but if we only focus on the glitz and glamour, we can miss out on some really great experiences in smaller, lesser-known, or virtually unknown places.

As I look at my home state of Pennsylvania, I see a microcosm of the national paradigm. Medical device employment is concentrated in the southeast and southwest corners of the state, with Philadelphia showing a strong presence at 12th in the above-mentioned dataset, and Pittsburgh, a respectable showing in the middle of the pack. But I thought, “What about the rest of Pennsylvania?” Are there some hidden gems somewhere in Pennsylvania’s “fly-over” country? There are indeed!

I decided to take an approach much like Food Network’s Guy Fieri, who combined the idea of unique experiences in out-of-the-way places with his love for food to create the hit series Diners, Drive-ins, and Dives. Fieri takes a cross-country road trip to visit some of America's classic "greasy spoon" restaurants that have been doing it right for decades. The first stop on my cross-state device tour was in Bellefonte, PA. If Fieri was going through the town, he might visit The Blonde Bistro or Jim’s Italian Cuisine, but I headed straight for Actuated Medical.

Actuated Medical, Inc. (AMI) was formed in 2006 with a mission to use motion technologies to improve medical devices. “Today, Actuated is focused in three different areas. One is clearing artificial tubes in a body; another is vibrating needles for easier tissue penetration, and the third is motion-gripping technologies,” explained Maureen L. Mulvihill, who is co-founder, owner, and CEO at AMI. The company has received numerous awards over the past decade for technology and entrepreneurship, and was recognized as one of MedTech Innovator’s top 100 companies of 2017.

I talked with Mulvihill about building a business in an out-of-the-way place. “I think that our central Pennsylvania location is a differentiator. The cost of living is not the same as San Francisco or Boston. We’re also located where I can get to Cleveland Clinic in four hours, down to Children’s Hospital of Philadelphia in four hours, New York City in three-and-a-half, Pittsburgh in three, [and] D.C. in three-and-a-half, so we’re really in a central location,” she explained. “The people that work in central Pennsylvania are hard-working individuals, they love coming to work and they love where they live. When you’re happy at home and you’re happy at work, life is good. That’s what we really have here: we have people that love the family atmosphere, love what they do, and love making a difference.”

There is, however, another side to being located a bit out of the way in central Pennsylvania. Mulvihill freely admits AMI’s location has made it necessary to put in a lot of infrastructure. “If we had been in Boston or San Francisco, we might not have had to do that, but now that it’s done, we are a fully integrated medical device company,” she concluded.

I would never underestimate the advantage of a motivated team of employees, but I wanted to better understand what AMI is all about. I pushed Mulvihill to help me understand the company’s business model, and she deftly gave me her elevator pitch: “What sets Actuated apart is we develop our own medical devices and we own the intellectual property. We have about ten devices in development right now,” she said. “We have the advantage that we can then license out our technologies. We want to develop them to a point that we can show there is a market for those devices, and then somebody acquires them. That’s our model.”

I also asked Mulvihill about AMI’s relationship with the Ben Franklin Technology Partners in Central and Northern PA. “We probably wouldn’t be here without them. In 2007 and 2008, Actuated received seed funding from them, which provided resources for us and enabled us to get our first two grants,” she explained. Mulvihill also indicated that AMI benefits from its proximity to State College and its relationship with Penn State University, which can provide clinical research support related to small business research grants that AMI has received.

As expected, Mulvihill was on-point with AMI’s successes, but what about the challenges? Every business faces them. Mulvihill offered two, the first of which was the business challenge of obtaining commercialization financing.

“We have a lot of grants or contracts to do device development, but finding investors willing to invest in a central Pennsylvania company has been an issue,” she said. Regarding the medtech side of the business, Mulvihill noted, “There’s a lot of regulatory and reimbursement [work] and things at hospitals like, value analysis… the time it takes to get something to market, and get the market to start purchasing it, is quite long. I don’t think people think it will take as long as it does. It can be hard for smaller businesses to have the capital make it through.”

Where Does NASA Go For Centrifuges?

The second stop on my central Pennsylvania device tour was in Port Matilda. In this small town, I would drop Guy Fieri off at Brother’s Pizza before visiting Drucker Diagnostics. Founded in 1932, Drucker designs and manufactures centrifuges, dry hematology, specimen protection lockboxes, and fluorescence microscopy products. I spoke with Jocelyne McGeever, VP of marketing at Drucker Diagnostics, and asked her to tell me about the company. She explained:

Drucker has been focused on the centrifugation of blood and urine specimens for diagnostic testing. This focus on a relatively small footprint has allowed Drucker to become a significant player... so much so that probably two-thirds to three-quarters of all the blood samples collected outside of hospitals are processed on Drucker centrifuges. Continuous improvement and development of new products that specifically address market needs is what really made the company successful. And now, we are seeing some validation of this in an unexpected way: when NASA needed a centrifuge for the International Space Station, they came to Drucker. They exercised the other part of the Drucker value proposition in asking us to very heavily customize one of our centrifuges for their need. [The final product will launch for the space station next month.]

But, once again, the question rose in my mind, why a small town like Port Matilda?

“Drucker was a family-owned business, and it was located in the State College area because that was where the owner wanted to live,” McGeever explained. “There were also three supporting components. First is the university [Penn State], which provides a pool of talent. The second part is that central Pennsylvania has a lower cost of living, which is very attractive for a manufacturing company. This lower cost component has allowed Drucker to keep a low-priced Chinese competitor at bay without manufacturing overseas. The third reason is that Ben Franklin Technology Partners in Central and Northern Pennsylvania has been instrumental in our early success. Some funding and assistance was obtained from the Ben Franklin program in the very early years of Drucker in the State College area.”

Finally, I asked McGeever about the operational logistics for Drucker, compared to her previous employers.

“I have worked in large global companies and in small startups, in companies that are trying to be global, but are not really big enough to do it. And I have to say, there is value in being an American company manufacturing in the U.S.” she explained. “It’s much easier to turn around, to be flexible, to make changes, to customize. You cannot do those things if you are not producing close enough to the market you are serving.”

Dim Summing It Up

I found the parallel advantages cited by Mulvihill and McGeever uncanny. Both Actuated Medical and Drucker Diagnostics seem to have achieved a sense of balance between their business goals and valuing their employees. They have chosen to be located where they are because they want to be there, not because everyone else is there. I have to respect that. In an industry that has seen much in the way of mergers and acquisitions, it is refreshing to see organizations choosing to take the road less traveled and being rewarded for it. Now, enough about devices. I’m hungry! It’s time to hop back in the car with Guy Fieri and find a good diner…or a dive…