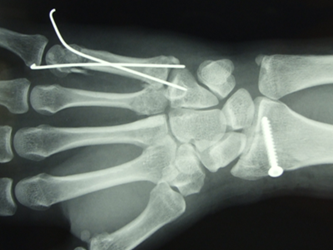 Researchers at North Carolina Agricultural and Technical State University (N.C. A&T) are investigating magnesium alloys as a dissolvable biomaterial for medical devices. Their goal is to overcome the potential long-term complications of permanent metal screws, plates, pins, staples, and stents by designing an implant that will disappear as the patient heals.

Metals such as titanium and iron are routinely used to repair bone fractures, holding together the broken pieces until the body has a chance to heal itself.  Unless these metal fixtures are later removed — a painful and complicated process —patients will live with them for the rest of their lives, which will cause problems with typical medical scans and airport security.

In more severe cases, hardware complications can include infection, damage to surrounding soft tissue, or implant failure due to loosening or hardware fractures. According to a Swiss study, these implants can exist safely in the body for years before problems arise.

By studying biodegradable metals, the researchers hope to circumvent these problems by making an implant that disappears as soon as it’s done its job. “Which means, the future implant… after the person cures, slowly it will biodegrade and it won’t be in your body,” Jag Sankar, leader of a group of engineers at N.C. A&T, told Science Nation.

In a recent video  released by Science Nation, Sankar spoke about the advantages of using magnesium, an element used in over 300 biochemical reactions in the body, including the processes that build bones and muscles. The advantage of magnesium is that it safely biodegrades; the challenge is getting it to remain strong enough to do its job before it disappears.

According to Christopher Smith, a materials engineer at N.C. A&T, the scientists are experimenting with different alloys and “add additional elements to make the magnesium more robust for medical devices.”

N.C. A&T is the lead research hub of a consortium that includes the University of Pittsburgh and the University of Cincinnati, who are lending their unique specialties to help make the degradable implant a reality.

A University of Pittsburgh press release reported that the consortium has received substantial financial backing from the National Science Foundation, including an initial grant of $18.5 million over five years and a recent extension of $4 million.

Earlier this year, a team from Korea designed a bioresorbable stent that incorporated “smart” technology, and clinical research suggests this will be the future of cardiovascular surgery.

Sankar told Science Nation that his team’s technology still needs to be thoroughly tested to address possible safety issues, but he expressed confidence that dissolvable orthopedic and cardiovascular hardware will be in use within the next ten years.