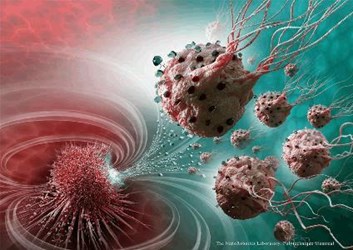 By combining nanotechnology with bacteria, a team of Canadian scientists has developed a platform for cancer drug delivery it claims is highly precise in targeting cancerous cells. The team’s nanobots are equipped with oxygen sensors that can seek out areas of oxygen depletion in a tumor, which is indicative of active cancer growth.

Tissues with hypoxia, or a deficient amount of oxygen, are a common feature in solid tumor biology. Research suggests that the “hypoxic zones” of tumors are notoriously resistant to therapies — even radiation treatments — and can lead to the development of aggressive cancer growth and spread, according to a study in Cancer and Metastasis Reviews.

A research team, which includes scientists from the Polytechnique Montreal, McGill University, and the University of Montreal, has developed a cancer drug delivery method that specifically targets the hypoxic zone in tumors. Their approach takes advantage of the natural migration tendencies of magnetotactic bacteria (MTB).

MTB synthesize chains of nano-sized magnetic particles and effectively operate as a “nano-compass” that orients the bacteria in the direction of a magnetic field. Together with a sensor measuring oxygen concentration, these properties aim the nanobots towards areas lacking oxygen. A study published in Nature Nanotechnology demonstrated that 55 percent of drug-loaded bacteria injected near tumors in beige mice penetrated the hypoxic zone.

According to researchers, this “breakthrough” could significantly improve the therapeutic index in similar nanocarriers tasked with cancer drug delivery.

Sylvain Martel, director of the Polytechnique Montreal Nanorobotics Laboratory and senior researcher of the study, remarked that the nanorobots — injected 100 million at a time — were  completely self-propelled and moved in a direct path towards their target deep inside the tumor.

“This innovative use of nanotransporters will have an impact not only on creating more advanced engineering concepts and original intervention methods, but it also throws the door wide open to the synthesis of new vehicles for therapeutic, imaging and diagnostic agents,” said Martel in a press release. “Chemotherapy, which is so toxic for the entire human body could make use of these natural nanorobots to move drugs directly to the targeted area, eliminating the harmful side effects while also boosting its therapeutic effectiveness.”

Martel’s team’s work is not the only research inspired by bacteria. A team from the Ecole Polytechnique Federale de Lausanne (EPFL) recently introduced a platform for designing bacteria-like microrobots using hydrogel and magnetic particles.

Earlier this year, researchers from Israel’s Bar-Ilan University — in partnership with Pfizer — began clinical trials to test the feasibility of cancer-fighting nanorobots built using strands of DNA. These nanorobots not only precisely target cancerous cells, they also are capable of repairing surrounding tissue damaged by cancer’s growth.

“Today, surgery is expensive, and is only available to patients who have access to specialized operating theaters and trained medical personnel,” said Ido Bachelet, co-senior researcher on the project, in a press release. “But the cost of fabricating a billion-strong team of medical nanorobots and injecting it in to the blood stream to perform a specific procedure is very low. This could revolutionize the practice of medicine.”