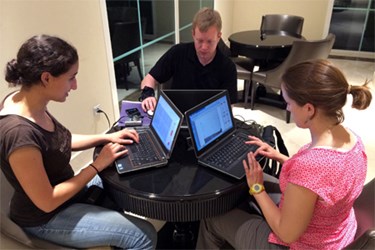 Centers for Disease Control and Prevention (CDC) officials have turned to technology in an effort to more effectively manage the recent West African Ebola outbreak. By using a new computer application, the CDC is focusing on an area of disease detection that has historically been one of the most difficult — finding potentially infected people who were exposed to the disease.

Finding people who may be at risk is part of a strategy known as contact tracing. Using this method, epidemiologists in the midst of the outbreak have a fighting chance at breaking the chain of disease transmission and stopping further spread of the disease. The Viral Hemorrhagic Fever app (VHF) is run on the CDC’s open software platform called Epi Info and makes contact tracing much easier and faster.

“With a disease as often fatal as Ebola, quickly identifying and following up with those who may have been exposed is key to saving lives and containing the outbreak,” said CDC director Tom Frieden, M.D., M.P.H., in a recent CDC press release, “Epi Info, the ‘Swiss Army knife’ of field-deployed epidemiologists, can now help to track disease more quickly.”

According to the CDC press release, the VHF app is the brain child of Dr. Ilana Schafer, D.V.M., M.S.P.H., an epidemic intelligence service officer in the CDC. Dr. Schafer worked on four outbreak responses in 2012, three of them being Ebola, where she was responsible for creating centralized databases of patient information and laboratory data. She was also recently deployed in the West African outbreak.

As stated in the press release, Dr. Shafer instigated the development of the VHF app by approaching the Epi Info software team after returning from the field in 2012 saying, “There has to be a better way to do this. People are dying and we can’t collect, analyze, and act on the data fast enough.”

An earlier version of the VHF app was used in a Ugandan outbreak in September of 2013. While providing invaluable feedback to the Epi Info development team, the app hadn’t really been used to its full potential until the current outbreak.

“As Ebola outbreaks are rare, this is the first time we’re getting to put this tool through its paces,” said CDC Epi Info team lead Asad Islam, M.S., in the press release. “Given that the Epi Info VHF tool has a tiny IT footprint and easily works in places with limited network connectivity, that it automatically updates as new information is added, and that it offers daily reports to guide follow-up, we are cautiously optimistic that it will make a significant difference.”

The Epi Info VHF application is specifically designed for use with viral hemorrhagic fevers like Ebola, Marburg, Rift Valley, Lassa, and the Crimean Congo fevers. The Ebola virus is a fluid born pathogen, transmitted through body fluids like blood, saliva, stool, urine, and sweat. Direct contact with objects that have been exposed to fluids may also lead to the transmission of the virus. The VHF app is particularly important because outbreaks can spread rapidly as early symptoms are easily misdiagnosed.

The West African Ebola outbreak is a serious affair and has required unusual measures to be taken like the use of unapproved diagnostic tests. Rapid test prototypes have also been developed and are being aggressively pursued.