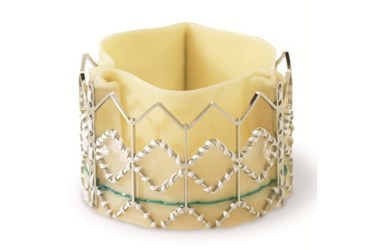 Edwards Lifesciences has received from the U.S. Food and Drug Administration (FDA) expanded indication approvals for its Sapien 3 and Sapien XT transcatheter heart valves in intermediate-risk patients suffering from aortic valve stenosis. With the approval, Edwards brings significantly more patients into its captive transcatheter aortic valve replacement (TAVR) market, ahead of Medtronic and others.

FDA approved Sapien XT in June 2014, and a year later approved Sapien 3 for the treatment of high-risk patients suffering from severe, symptomatic aortic stenosis. Now, both Sapien XT and Sapien 3 also are available for patients with aortic valve stenosis who are at intermediate risk for death or complications associated with open-heart surgery. This represents about one-third of patients referred for open-heart surgery for aortic valve replacement.

"This is the first time in the U.S. that a transcatheter aortic valve has been approved for use in intermediate risk patients," said Bram Zuckerman, M.D., director of the division of cardiovascular devices at the FDA's Center for Devices and Radiological Health, in prepared remarks. "This new approval significantly expands the number of patients indicated for this less invasive procedure for aortic valve replacement."

Edwards CEO Michael A. Mussallem said in April that the final intermediate-risk data sets from two clinical studies will be evaluated by FDA, and he anticipated FDA approval in the beginning of the fourth quarter.

The company declared that the two studies demonstrated a reasonable assurance of safety and effectiveness for the Sapien XT and Sapien 3 devices in intermediate risk patients, hence passing muster with FDA.

"The intermediate-risk approval of the SAPIEN 3 valve is a major milestone, since it provides a less-invasive therapy that has demonstrated better outcomes for aortic valve patients, and is supported by the largest and rigorous comparative body of evidence for the treatment of aortic stenosis," said Larry L. Wood, Edwards' corporate VP of transcatheter heart valves, in an announcement.

FDA requires Edwards to monitor for the next ten years patients who received either the Sapient XT or Sapien 3 device.

Edwards reported in April that significant transcatheter heart valve sales drove the majority of the growth in the first quarter. Sapien's expanded indication for intermediate patients could further shore up Edwards' leadership position in the promising TAVR market ahead of Medtronic and other competitors, particularly Boston Scientific, Direct Flow Medical, and St. Jude Medical.

He says that growth translates to an extra $400 million in annual revenues by 2020, at which time the TAVR market would be worth close to $1.8 billion.  Edwards has rosier estimates of the global TAVR market to be valued at $5 billion by 2021.