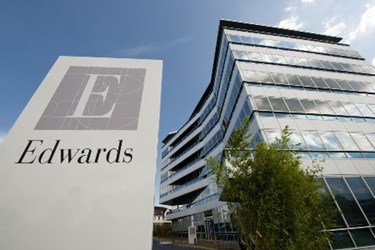 Building on a strong showing during the preceding quarter, and based on increased adoption in the United States, transcatheter heart valve (THV) therapies drove up first quarter sales of Edwards Lifesciences, the company announced recently. The strong start to the year, and expected FDA approval of an expanded indication for the Sapien 3 device, raised the company's outlook for 2016.

"Significant transcatheter heart valve sales once again drove the majority of this quarter's growth, with solid performance in our core businesses, in particular Critical Care.  We are also pleased to report strong bottom line results while aggressively investing in new therapies that can have a meaningful future impact. And, most importantly, even more patients are benefiting from our life saving technologies than ever before," said Edwards CEO Michael A. Mussallem.

Echoing his pronouncements earlier this year, Mussallem said he is "enthusiastic" about the continued adoption and development of transcatheter-based therapies. He also remains "confident" in prospects of strong sales growth, especially due to an expected approval and launch at the beginning of the fourth quarter of an expanded indication for intermediate-risk patients with aortic stenosis receiving the Sapien 3 valve. He said the company remains on track to submit the final intermediate risk data sets from two clinical studies to the U.S. Food and Drug Administration (FDA) in the next couple of weeks.

"We continue to believe that TAVR provides an important and compelling therapy option for a large number of untreated elderly patients," Mussallem said during the follow-up earnings call. "Based primarily on the continuing strong therapy adoption of TAVR, we are increasing our 2016 sales guidance by $100 million, to $1.4 billion to $1.6 billion. We now expect our underlying sales growth to exceed 25 percent."

Even though the company expects a significant jump in business as TAVR becomes an option for intermediate-risk patients – and will increase manufacturing capacity in anticipation – it believes low-risk patients will continue to be treated surgically, and that the company will still develop surgical valve technologies to meet this growing demand as the global population ages.

However, with minimally-invasive procedures gaining favor over open-heart surgery, and additional indications on the horizon, transcatheter heart valve therapies will be a big growth driver. Edwards estimates the global TAVR market to be worth $5 billion by 2021, and being the pioneer in this segment, it wants to retain market leadership amidst new competition from Medtronic and others. Also a potential driver is the CardiAQ transcatheter mitral valve implantation (TMVI) system acquired by Edwards last year. Mussallem said the company is implementing several "enhancements" to this early-stage technology ahead of a CE Mark trial by midyear.

He added that suspension of the medical device tax will allow the company to accelerate R&D investments – pegged at 16 percent of sales for the full-year – in structural heart initiatives.