Times are changing, and so are medical devices. Today, medical devices are not restricted to clinics and hospitals. They are getting into homes, schools, office spaces, Disneyland, and aircrafts to ensure earlier diagnosis, better monitoring, and faster treatment. With patient data collection and consolidation becoming extremely important, medical devices have started to incorporate machine-to-machine (M2M) communication. M2M communication refers to devices talking or communicating to computers, smart sensors, and mobile devices with limited intervention. The machine has the connectivity to interact with other machines or information systems and the intelligence to analyse the data and take corrective actions as required.

Ericsson has estimated that by the end of 2020, more than 50 billion machines will be ‘talking’ (or connected) all over the world. There is a huge opportunity to develop new services and business models in all verticals, including medical equipment.

In this article, we will focus on the eight key factors to evaluate when designing medical devices with M2M communications capabilities.

These protocols can be classified under the following three categories:

The selection criteria for one or many of these technologies are the focus of our article.

8 Key Factors To Selecting M2M Technology For Medical Devices
When designing medical devices based on M2M communication, it is imperative to consider the following factors.

1. Data Rates
Data rates specify the rate at which data can be transferred from one machine to another. The data rates that an endoscopy unit requires for its output to be displayed on a tablet would be much higher (in Mbps) compared to that of an ECG monitoring device (in Kbps), as the information transfer is different. Data rates are usually measured based on two parameters

While these data rates are defined by the applicable standards, the actual rates achieved in the field are much lower. This is because the rates defined above are achieved under controlled laboratory environments. They do not take into consideration the distance between devices, the relative motion between the connected nodes, or the RF interference that might plague the operating environment.

Typical rates would vary across situations, but the rule of thumb is to consider between 2 percent and 10 percent as something that can be realized.

Cellular communication devices consume more power because their operational range is a few kilometres. Wi-Fi devices also consume more power, as their required data rate is higher, although their operational range is less than cellular communication. Maximum power is consumed by 3G and 4G cellular systems because of long ranges of operation and also very high data rates. These devices require high-capacity rechargeable batteries, if they are to be portable.

3. Data Periodicity
Data periodicity relates to the requirement of the application to transfer or send data at particular time intervals to other machines or applications. For example, a diabetic patient needs to monitor blood glucose levels, eat meals on time, exercise, and adjust insulin dosages accordingly. A blood glucose monitor may utilize other wireless-based devices settled in a sophisticated environment that facilitate data communication over end-to-end networks. A continuous monitoring device would have to communicate data more frequently than an interrupt-based monitoring device.

For real-time transmission of huge amounts of data, it is advisable to use non-cellular technologies unless the device will be used in the field. In contrast, if the device needs to upload data at periodic intervals, it can be done during off-peak hours to avoid congestion — often at reduced tariffs.

4. Data Security
As more wireless technologies are emerging in M2M, it becomes a challenging task to secure the device data that is being transferred from one node to another node or from one network to another network. While transfer security is handled by the transfer technology and protocol (which is quite robust), it does not consider the endpoint security that could pose a threat. It is important to secure patient data, not only to adhere to HIPAA guidelines, but also to make sure critical information is safeguarded.

Secure communication is one of the primary reasons for the usage of NFC devices. RFID tags use different security standards like MIFARE, DESFire, iCLASS, etc. These standards have specific data encryption and description methods to secure original data. At the hardware level, different kinds of encoding can be used on data, which increases security levels.

5. Frequency Band Of Operation
The choice of the band for a medical device to operate impacts multiple factors of the device design. Devices working on an unlicensed frequency band — like the industrial, scientific, and medical (ISM) radio bands — can freely communicate, as cordless phones or TV remotes do. These would typically apply for non-cellular technologies. Devices looking to operate on licenced frequency bands would need to subscribe with a service provider to use the technology.

6. Portable Vs. Fixed
Even fixed devices can communicate over wireless. It simplifies installations and reduces maintenance and support expenses for the last-mile connectivity. The choice of wireless technology being used depends on the size of the device itself.  Based on the range of movement of the device, the following communication protocols could be put to use:

There could also be cases where the device is to be used only indoors, anywhere in the world. Having an Internet connection with Wi-Fi connectivity would suffice for such an application.

7. Real Time Vs. Offline
In today’s world, accurately retrieving information from devices at regular intervals has become more important, especially for real-time monitoring devices. With high-demand data requirement from connected devices, decision making relies on advanced and capable real-time technologies. So, this factor defines the technology’s limitations in real-time and the capability to send heavy data within short intervals of time. All wireless protocols being considered are suited for real-time applications, although we should consider the other factors before making the final call.

We have worked on telemedicine systems where a physician is available over a video connection to examine patients and share prescriptions. Such applications require stringent, high QoS (quality of service) and real-time communication to be market-worthy.

8. Dependence On Third Parties For QOS
This factor is particularly applicable to 2G and 3G communication technology. It depends on the service provider, data rates, charge of supported plan, land mark of the coverage area, availability of service in remote areas, needs of the application, and service support. Considering all the parameters helps us to identify current provider specification and limits.

While there is a typical QoS, it does not guarantee performance of the communication network, which is susceptible for traffic overload. 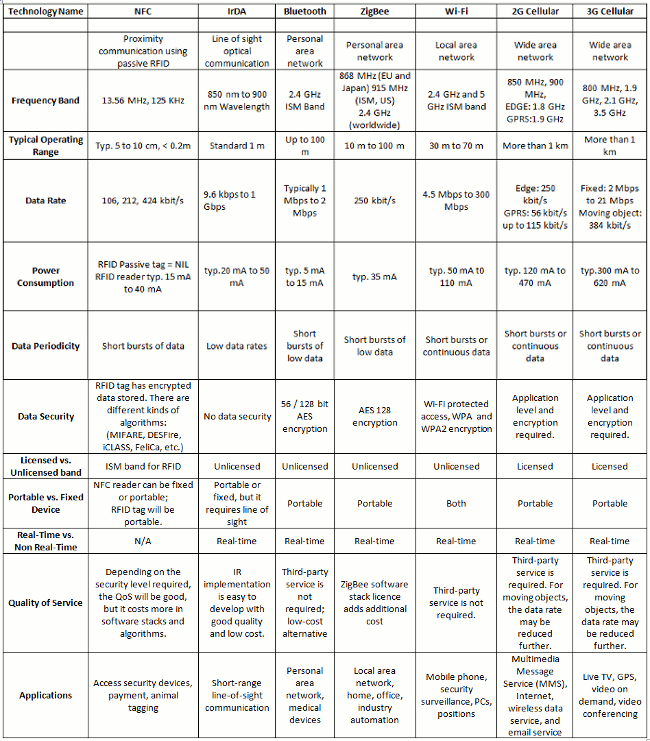 Conclusion
M2M communication is set to take over applications in automated patient monitoring, patient diagnosis, and even live remote examination.  There are multiple technologies that could be used to connect to remote users using sensors and data communicated over Bluetooth, IR, or NFC to a local device. The local device may use ZigBee, Wi-Fi, cellular technology, or wired Ethernet to communicate useful information to distances with the use of Internet at the backend. Bluetooth LE is a rising star when considering high data rate medical devices with less distance. NFC is a great option when considering data transfer within the 10 cm range in an efficient and secure manner. For devices that require low power consumption and require a long life span, ZigBee is a great option.  For gateways with fixed devices connected to short-range devices and devices connected to other devices through the Internet, 3G is a very suitable candidate. For requirements to transmit bulk data over 40 meters in high-speed data rates, Wi-Fi is the best choice to complete the network connection.

Selection of wireless technology is solely dependent on the medical device being developed and the use case being considered. For example, for one of the automated insulin injection pumps that we designed at eInfochips, the requirement was to automatically monitor blood glucose levels and administer the required insulin doses. The device would also locally communicate the data with the internal systems using wireless, which would be transmitted over the Internet for monitoring by physicians.