The European market for hearing devices has experienced significant growth in recent years. In particular, the total number of hearing aids sold in France, Germany, and the United Kingdom has grown dramatically. In 2015, the market was valued at just over €7.2 billion. Included in our analysis are the markets for hearing aids, hearing aid batteries, cochlear implants, and bone-anchored hearing aids. Since middle-ear implants (aka, direct drives) and personal sound amplification products (PSAPs) have yet to enter the market in any considerable way, they have been omitted from our analysis.

While the overall market is experiencing moderate growth, there are two opposing forces at play. First, there have been decreases across the board in the average sales price (ASP) of a hearing device. This has had a limiting effect on the market. Second, there has been an increase in the total units sold. These two opposing forces have yielded marginal growth, as the effect of an increase in units sold has been the dominant factor. 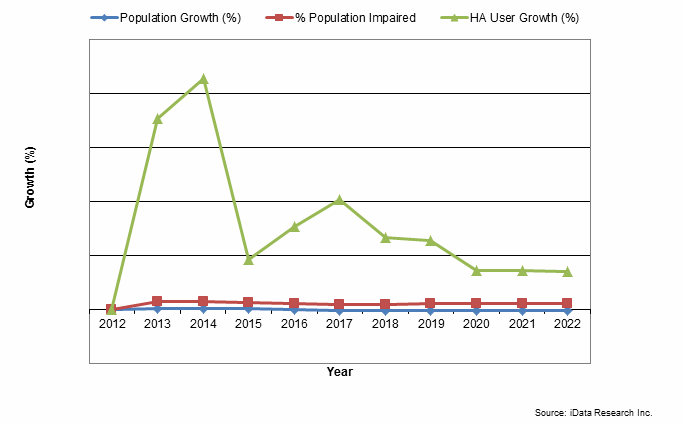 In 2015, the hearing aid market was by far the largest segment in the overall market for hearing devices. Anyone familiar with the European hearing aid market knows that there really is no such thing as a “European” market. The markets within each country are so diverse that aggregating them is a difficult endeavor. The 2016 iData report segments the markets into manufacturer and retail.

Within each sub-segment, total units sold are broken down by style, battery size, and circuit type. Within the style breakdown, units are divided into behind-the-ear (BTE) and in-the-ear (ITE). Within the battery size breakdown, it is divided into sizes 10, 312, 13, and 675. While size 5 batteries do exist, they have marginal market penetration. Lastly, circuit type is broken up into basic, economy, mid-level, and premium. Analog no longer exists in Europe to any considerable extent.

Sonova has continued to dominate the manufacturer market, with William Demant closing in. Sonova’s subsidiary Phonak is one of the most popular brands in Europe. Phonak also has collaborated with another Sonova subsidiary, Advanced Bionics, to offer the Naída system, a product for patients who would benefit from having a bimodal solution (one hearing aid and one cochlear implant). 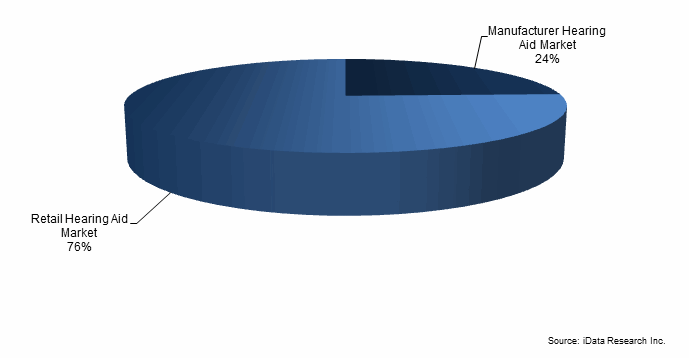 Reimbursement levels within any European country can dramatically affect the market; average sales prices can be five times more from one country to the next. In addition, the market is highly dependent upon the prevailing reimbursement rates. Changes in this rate can have dramatic effects on the market, as was the case in Switzerland. In 2012, for example, the government slashed reimbursements to such an extent that the market has yet to recover. In contrast, the increase in reimbursement rates in Germany has nearly doubled total units sold over the last five or six years. Reimbursement also affects the type of hearing aid which is made available in terms of the style and the circuit. While there has been a shift from traditional behind-the-ear (tBTE) to receiver-in-the-canal (RIC), this shift is not completely uniform across all European countries.

Cochlear Ltd. continues to dominate the cochlear implant market. The company’s Nucleus 6 implant contains, according to Cochlear, the smallest cochlear implant processor in the world, as well as a 2.4 GHz Cochlear True Wireless technology, allowing direct connection with TV, smartphones, and other wireless Bluetooth devices.

The European market for hearing devices will be spurred by an increase in hearing impairment over the next ten years, and will respond to changes in reimbursement. Unlike other markets, there is no complete overlap between these products in terms of the approved indications; this will help avoid an intense price competition between these different treatment modalities. Nonetheless, downward pressure on prices is expected to be outweighed by the increase in demand, leading to growth over the forecast period.

Scott McInnes is a research analyst at iData Research and was lead researcher for the 2015 European Orthopedic Biomaterials Market. Connect with Scott on LinkedIn or contact him at scottm@idataresearch.net.

Kamran Zamanian, Ph.D., is president, CEO, and a founding partner of iData Research. He has spent over 20 years working in the market research industry.