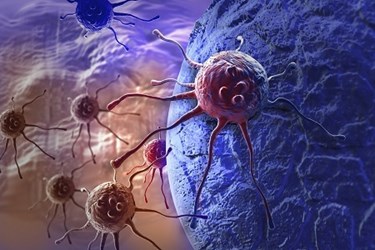 Even with its frequency, the current diagnostic landscape for prostate cancer is imprecise, because the initial prostate cancer screen sets off a cascade of events and often leads to unnecessary and inaccurate biopsies. One million prostate biopsies are performed in the US every year, but only 25 percent of the men who undergo a prostate biopsy, due to an elevated PSA, have high-grade prostate cancer. This practice has amounted to USD $1.3B in unnecessary spending in the US since 2012. The overuse of biopsying, in turn, leads to over-diagnosis and over-treatment of the disease — even leading to unnecessary prostatectomies.

The Union for International Cancer Control (UICC) and the American Joint Committee on Cancer (AJCC) have used the above variables to define prognostic groups and to predict the probability of biochemical failure after definitive local therapy, and consequently select the best therapeutic approach.

Of these three prognosticators, PSA level testing is the least invasive and is traditionally used as a screening tool. However, PSA levels are not specific to prostate cancer and include many factors — such as age, infection, and trauma — which can influence the level. As such, the assay can lead to false-negatives and false-positives.

Refinements to PSA measurements — including PSA doubling time, PSA velocity (rate of change in PSA over time), PSA density (PSA to prostate volume ratio), and age-specific PSA levels — have not significantly influenced the sensitivity or the specificity of the test. Additionally, the PSA screen cannot distinguish between indolent and aggressive disease. Thus, it remains at the physician’s discretion how these additional PSA measurements are used and interpreted when monitoring a prostate cancer patient over time.

Given the inability to improve the predictive value of the PSA screen, the US Preventive Services Task Force recommendation of this assay has vacillated from recommending against the use of PSA testing in 2012 (a Grade D), to more recently, in 2017, moving the test up a notch to the ambiguous ‘Grade C,’ which is at the discretion of the physician and patient based on risk factors or clinical presentation concerning for aggressive disease.

We have included a summary of the four categories of prostate cancer diagnostics included in the NCCN guidelines to show the range of tests and their potential utility:

Sangia Total PSA Test (used pre-biopsy) — Developed by OPKO Diagnostics, LLC and approved by the FDA in January 2019, this is the first point-of-care test that can deliver PSA results in less than 15 minutes. Sangia is a sensitive immunoassay that quantitatively measures the total PSA level and can be administered with a simple finger prick. The manufacturer’s hope is that a PSA test that provides results in the physician’s office will significantly benefit the diagnostic paradigm for prostate cancer.

Prostate health index [PHI] (used pre-biopsy) — Developed by Beckman Coulter Inc., in partnership with the NCI’s Early Detection Research Network, and FDA approved in 2012, this test is a combination of three PSA markers: PSA, Free PSA (PSA not bound to plasma proteins), and proPSA (the incompletely processed single-chain form of PSA). The test is used to follow up with patients who have elevated PSA levels, but haven’t undergone a biopsy. Data from clinical utility and a physician survey study indicate that use of PHI is associated with a significant decrease in biopsy decisions. Additional studies indicate PHI has potential clinical utility to predict aggressive prostate cancer.

ExoDx Prostate IntelliScore [EPI] (used pre-biopsy) — Developed by ExoDx (now owned by Bio-Techne) and available in the US since 2016, this test is a urine-based liquid biopsy that looks for three biomarkers of expressed exosomal RNA (PCA3, ERG, SPDEF), which are indicators of high-grade prostate cancer. The test is designed to be used in addition to PSA to more accurately predict the aggressiveness of prostate cancer before an initial biopsy.

As of Jan. 31, 2019, the NCCN includes the EPI assay as one of the biomarker tests that can be used in clinical practice for prostate cancer, rather than just an investigational assay. Data currently available in the NCCN guidelines indicate that use of the EPI test would reduce unnecessary biopsies by 27 percent.

4K Score (used post-biopsy) — Developed by OPKO Lab Inc. and available in the US in 2014, this test is a combination of three PSA markers (total PSA, free PSA, intact PSA), plus an additional related marker: kallikrein-related peptide 2 (hK2). Age of the patient, digital rectum exam results, and any prior biopsy status also are factored into the risk detection score. The test reports the likelihood of detecting high-grade cancer if a biopsy is performed.

This test is recommended for patients before conducting an initial biopsy, and for those with a prior negative biopsy who are at ‘higher risk’ for ‘clinically significant’ prostate cancer. Data from several studies indicate the use of the 4K Score test reduced the number of biopsies by 42-65 percent, with variation in the percentage reduction in biopsies related to the probable risk of finding a high-grade tumor.

ConfirmMDx (used post-biopsy) — Developed by MDX health and available in the US in 2012, this test is a multiplex DNA methylation assay that evaluates epigenetic biomarkers. The test helps to identify patients who are at higher risk of having indolent prostate cancer and can serve as a decision tool when determining whether to do a repeat biopsy. Clinical studies indicate the test has a net predictive value of 88-90 percent in determining whether a patient should repeat a biopsy.

In addition to the five biomarker tests included in the NCCN’s most recent prostate cancer early detection guidelines, two additional tests are listed as investigational. Both tests are used in significant numbers of patients throughout the US and EU:

ProMark — Developed by Metamark and available in the US in 2014, this multiplex protein test is used to aid in making treatment decisions for very-low to low-risk patients, post-biopsy, with at least ten years of life expectancy. A 2015 clinical study indicated significant predictive values for the very-low and low-risk categories, as well as non-favorable pathology.

In a 2015 clinical study, the team was able to separate favorable from non-favorable pathology, as well as predict future risk with high accuracy.

OncotypeDX — Developed by GenomicHealth and available in the US in 2013, this multigene expression assay is used to aid in decision treatment for very-low to intermediate-risk patients, post-biopsy, with at least ten years of life expectancy. The test helps to identify patients with less aggressive disease who are likely candidates for active surveillance, and to guide treatment for patients with aggressive disease. A 2016 clinical study reports a 21 percent reduction in interventional procedures.

Prolaris score — Developed by Myriad Genetics and available in the US in 2010, this test creates a cell cycle progression (CCP) risk score based on the expression of 46 genes, representing a number of cell cycle and housekeeping genes. The test predicts relapse or metastasis of cancer in previously treated patients. The assay is intended to aid in decision treatment for very-low to intermediate-risk patients, post-biopsy, with at least 10 years of life expectancy. NCCN does not provide data about the effectiveness of this test. However, data published in 2016 from a registry study indicates about 50 percent of cases showed a change between intended treatment before and after CCP reporting.

Decipher — Developed by GenomeDx Biosciences and available in the US in 2015, this genomic test looks at the level of 22 RNA markers to predict the probability of metastasis after radical prostatectomy surgery and provides an independent assessment of tumor aggressiveness within five years. To date, NCCN does not provide data about the effectiveness of this test. GenomeDx claims that, on average, 39 percent of physicians changed a patient treatment recommendation through use of the Decipher results, and a 2017 meta-analysis concludes Decipher can stratify patients into the high, medium, and low risk of prostate cancer post-biopsy.

Oncotype DX AR-V7 — Developed by Genomic Health and available in the US since 2018, this test identifies patients who will not respond to the androgen receptor (AR)-targeted therapies, such as abiraterone (e.g., Zytiga) or enzalutamide (e.g., Xtandi). Thus, the NCCN suggests this test is best for patients after they received treatment for abiraterone or enzalutamide, and who have primary resistance (20-40 percent of patients) or have developed resistance once receiving treatment. Data indicates a 76 percent reduction in risk of death for patients when treated with chemotherapy. 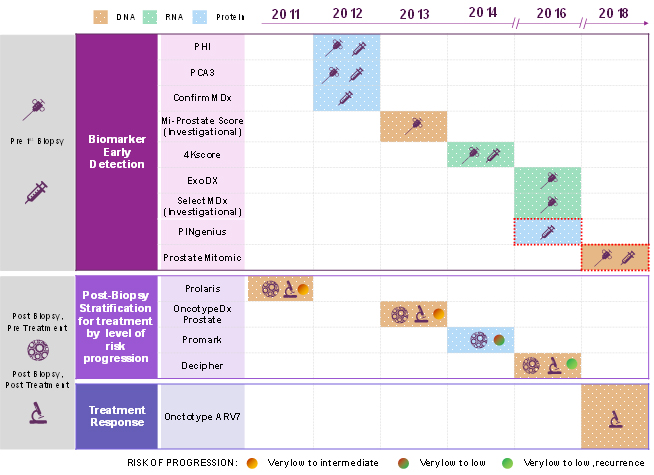 Overall, the NCCN’s guidelines from January 2019 have lukewarm recommendations for these assays, leaving potentially multiple pathways for a physician and patient to navigate as a follow-up to an initial suspicion of prostate cancer and/or screening.

In addition to the NCCN guidelines for using the described pre- or post-biopsy laboratory assays, there is genetic testing and a point-of-care PSA testing to navigate. During the last five years, the literature has exploded, with mutations in 16 different genes now associated with increased risk of prostate cancer. The NCCN notes both the mutations and the importance of considering genetic counseling but — perhaps not surprisingly — does not mention 23andMe’s direct-to-consumer genetic mutation prostate cancer test, launched in the US in 2018.

Also not yet included in the NCCN guidelines is Sangia’s recently FDA-approved hand-held PSA device.  This device will not only enable physicians to screen patients in their offices, it will disrupt traditional laboratory assay services. The number of prostate screening pathways may increase, as will confusion for physicians and patients trying to determine how best to navigate follow-up to any initial suspicion of prostate cancer and/or screenings.

There are 28 FDA-approved drugs for prostate cancer, and research is ongoing into radiation therapy, hormone therapy, immunotherapy (including prostate cancer vaccines), chemotherapy, and drugs specifically targeting cancer cells. According to ClinicalTrials.gov, 260 ongoing clinical trials are investigating prostate cancer, of which 61 are in Phase 3 and 192 are in Phase 2. Several of these drugs are designated as breakthrough therapies, and another two drugs have received a fast-track designation from the FDA.

All of this activity in drug manufacturing, coupled with the high incidence and prevalence rate of prostate cancer, drive the need for a ubiquitous assay.

Many challenges remain in developing useful diagnostic and monitoring assays for prostate cancer, including the harmonization and validity of assays used in biomarker development; the need for comparative studies for biomarker assays used in similar contexts; the association of correlative immune parameters with clinical endpoints; the development of panels applicable to multiple clinical contexts and therapies; and the sample sizes and the cost-effectiveness of such tests. 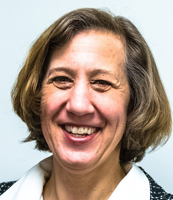 Laura Ruth, Ph.D. is a Director with Fuld + Company’s Global Health + Life Science Practice. In addition to leading a wide array of projects at Fuld, Dr. Ruth has published several thought leadership pieces on the topics of competitive intelligence, physician versus pharmacist vaccinators, and generic medical devices.  She also has received Competitive Intelligence Professional (CIP™) Certificate. Prior to joining Fuld, Dr. Ruth was an independent medical, science, and technology writer and consultant covering a wide range of science, technology, business, policy, and regulatory topics. Dr. Ruth holds a B.S. in chemistry from MIT and a Ph.D. in biological X-ray crystallography from the University of Pennsylvania. 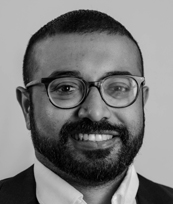 Syed Shehab, MD is a Health + Life Science Analyst at Fuld + Company. After a stint in Internal Medicine at the Boston Medical Center, Syed decided to join the consulting his world. In addition to attending the Larner College of Medicine, at the University of Vermont, he graduated from Vassar College with a major in Biochemistry and a minor in Physics. Syed is a long-suffering New York Jets fan. He likes to read narrative non-fiction and is a contributing writer for various medical blogs.