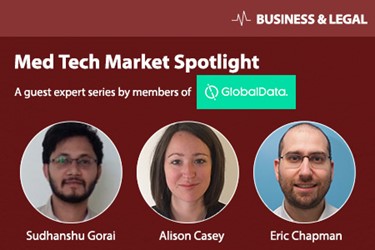 This article focuses on four major in vitro diagnostics (IVD) markets which, together, are estimated to account for over $5.63 billion USD in revenue*: human immunodeficiency virus (HIV), hepatitis B, hepatitis C, and Treponema pallidum (or syphilis) tests.

All four of these IVD markets are highly complex, representing devices that apply to multiple patient groups and scenarios. In addition to infection and suspected infection cases, HIV, hepatitis B, hepatitis C, and Treponema pallidum tests are also frequently used to screen pregnant women, anonymous sperm donations, whole blood donations, and source plasma donations. As such, the size and forecast growth trends of these markets are influenced by many different factors.

HIV tests covered in this market include enzyme immune assay (EIA) tests, nucleic acid amplification tests (NAAT), point-of-care (POC) tests, and CD4 count tests. For the hepatitis B and hepatitis C test markets, EIA tests and NAATs are considered. Since multi-parameter HIV, hepatitis B, and hepatitis C NAATs apply to all three markets, they are evaluated as their own separate device segment.

GlobalData analyses indicate that HIV tests comprise the largest of these markets, with revenue from reagents alone amounting to an estimated $2.36 billion USD in 2018 (Fig. 1). Hepatitis B and hepatitis C tests are also billion-dollar IVD markets, generating $1.08 and $1.48 billion USD in 2018, respectively. The global revenue for Treponema pallidum tests is lower, with an estimated value of $344.38 million USD in 2018. This smaller market size is largely due to lower average selling prices (ASPs) for Treponema pallidum testing devices. Finally, multi-parameter HIV, Hepatitis B, and Hepatitis C NAATs generate $371.5 million USD in global revenue (Fig. 1). 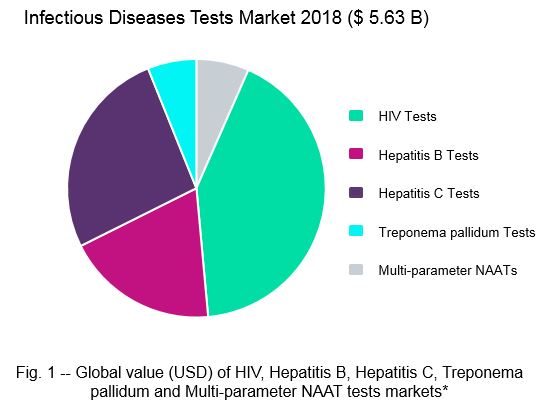 The global HIV, hepatitis B, hepatitis C, and Treponema pallidum test markets all are expected to grow over the next ten years (Fig. 2). The Treponema pallidum test market is expected to experience the highest growth (3 percent), followed by hepatitis B tests (2.02 percent), hepatitis C tests (1.98 percent) and HIV tests (1.92 percent). Increases in sales of these IVD devices are being driven by a myriad of factors, including rises in disease incidence and prevalence, as well as the number of anonymous sperm donations and source plasma donations. 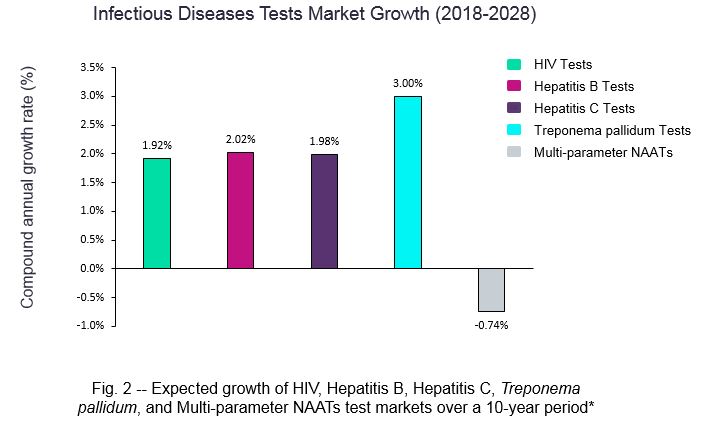 Finally, the global market for Multi-parameter HIV, hepatitis B, and hepatitis C NAATs is expected to decline moving forward, due to reductions in the number of voluntary whole blood donations (Fig. 2).

Incidence of sexually transmitted diseases, such as HIV, hepatitis B, and Treponema pallidum is expected to increase in many countries over the next decade, across all geographical regions. These rises in disease incidence are predicted to lead to a higher number of suspected infection cases being tested, as well as improved disease awareness and continuation of strong screening initiatives. Conversely, incidence of hepatitis C is generally expected to remain relatively stable.

Interestingly, in some key markets, incidence rates for HIV or hepatitis B have stabilized. This is likely due to campaigns that provide condoms, sterile needles, syringes, pre-exposure prophylaxis, and antiretroviral therapy (ART). Additionally, prevention of mother-to-child transmission (PMTCT) initiatives are expected to have a positive impact on stemming the spread of these diseases. In the case of hepatitis B, successful implementation of universal hepatitis B vaccinations has occurred in numerous countries.

For HIV, hepatitis B, and hepatitis C tests, disease prevalence is an important factor impacting market size and growth, as these devices are frequently employed to monitor existing patients. In general, prevalence of these diseases is increasing due to the success of antiretroviral agents and awareness of treatment regimens that prolong the lives of affected patients. In the case of hepatitis C, curative treatments are available, but expensive, making wide distribution impractical in developing countries.

Women are typically screened during their first trimester of pregnancy. For pregnant women at high-risk of acquiring an infection, testing is sometimes repeated at the beginning of the third trimester or at the time of delivery.

Infertility is a growing concern worldwide, as reflected by the increasing number of artificial insemination or assisted reproductive technology procedures in many countries across the North American, European, and Asia-Pacific regions. Although these procedures are often associated with high costs, many countries offer full or partial coverage for such treatments via their national health plans.

Growing demand for anonymous sperm donations is expected to positively impact the HIV, hepatitis B, hepatitis C, and Treponema pallidum tests markets. This is due to legal requirements, which require these specimens to be screened for infectious diseases. Exceptions to this rule include Egypt, Turkey, and Saudi Arabia, which do not legally permit the practice of third-party assisted reproduction.

Whole blood donations are also required to undergo infectious disease testing. We estimate that, similar to live birth rates, such donations are declining in many countries and, as such, work to oppose market growth.

Finally, source plasma is another HCT/P subject to infectious disease testing. Currently, global demand for blood plasma far exceeds supply. Commercial blood establishments generate most of the world's plasma, with the largest volume coming from paid donors in the US. This industry has demonstrated consistent growth for the past five years and we anticipate this trend will continue through the next decade.

For source plasma collected in Europe, higher volumes are obtained from Germany, the Czech Republic and Austria, compared to other European countries. This is likely due to the presence in these nations of the Plasma Protein Therapeutics Association (PPTA), which represents private sector manufacturers of plasma-derived therapies.

For HIV specific devices, EIA tests comprise the largest test type, accounting for 59.19 percent of total global revenue, primarily due to their high sales volume (Fig. 3). A similar trend is observed for hepatitis B and hepatitis C testing devices. While fewer NAATs are sold globally in these three markets, this test type also constitutes a significant portion of market revenue due to its higher price point. Finally, we estimate that HIV POC tests and CD4 count tests currently represent 20.42 percent and 4.29 percent of the HIV test market, respectively. 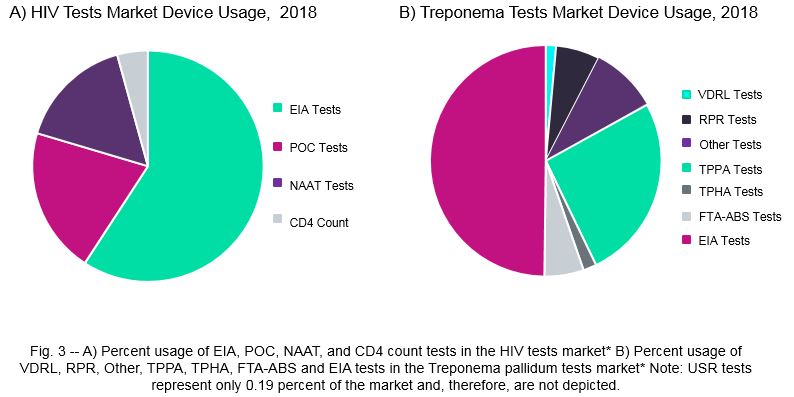 In general, EIA tests are used for high-throughput screening of patient samples, while NAATs are mostly used to confirm positive infection cases and for viral load monitoring. Additionally, multi-parameter HIV, hepatitis B, and hepatitis C NAATs are also frequently used to screen whole blood and source plasma donation, often with multiple samples combined into a mini pool. POC tests allow for HIV diagnosis outside of clinical settings — including in remote rural areas — due to their ease of use and lack of dependence on complex laboratory infrastructure.

Treponemal tests include TPHA, TPPA, FTA-ABS, and EIA tests. These tests traditionally tended to be used as confirmatory tests or to diagnose patients who showed symptoms of late syphilis, but tested negative via non-treponemal methods. This is because individuals can remain reactive to treponemal tests for many years following treatment. Furthermore, as treponemal tests demonstrate poor correlation with disease activity, these tests are not recommended for evaluating patients’ response to therapy, relapse, or re-infection.

Use of treponemal tests for patient screening is increasing due to the development of EIA tests that are highly sensitive, specific, and can detect the presence of both IgG and IgM syphilis antibodies. These EIAs have been adopted by many institutions due to their high-throughput capabilities. Currently, we estimate that treponemal tests comprise 83.03 percent of the Treponema pallidum tests market, with EIA tests and TPPA comprising the largest market share at 49.81 percent and 25.87 percent, respectively (Fig. 3).

Finally, a number of pipeline and recently approved devices are challenging conventional testing strategies, aiming to simplify screening for major infectious diseases. For example, in 2017, the FDA approved Bio-Rad’s BioPlex 2200 Syphilis Total & RPR assay, which combines treponemal and non-treponemal assays into a single test. Bio-Rad expects this new device to eliminate the need for multiple Treponema pallidum tests to achieve a diagnosis.

Furthermore, in 2017, Roche received FDA approval for the Elecsys HIV combi PT assay, which detects HIV-1 p24 antigen, as well as HIV-1 and HIV-2 antibodies, in a highly sensitive manner. Roche states that laboratories will also be able to screen for co-infections, including hepatitis C and syphilis, eliminating the need to obtain multiple samples and reducing analyzer usage. These new products are expected to drive sales within specific device segments as they gain popularity and compete with older technologies. 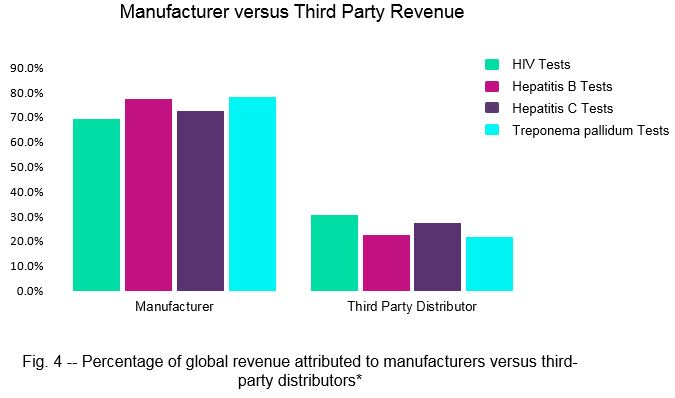 Significant third-party distributors include ELITech, which signed an agreement with Abbott in 2016 to distribute STD diagnostic tests in the US. In 2015, Bio-Rad named Beckman Coulter as the exclusive distributor for its Access HIV and Hepatitis C combo assays, in selected countries, for a 10-year period.  Similarly, in 2005, Qiagen granted distribution rights to Abbott for a range of infectious disease tests, including Hepatitis B.

Along with distribution agreements, acquisitions are expected to contribute to rapidly growing infectious diseases test markets. For example, in 2017, Siemens Healthineers acquired Fast Track Diagnostics (FTD), which has helped the company to expand its infectious disease detection test portfolio with a range of CE-marked products for hepatitis and other STDs. Similarly, Abbott acquired Alere in 2017, which strengthened its diagnostic presence across the globe. This acquisition will likely help Abbott to grow its business in segments including POC testing for infectious diseases.

The HIV, hepatitis B, hepatitis C, Treponema pallidum tests markets are highly complex, with their overall size and future trends determined by several different factors. For instance, these tests are applied to varied patient groups across differing circumstances — some of which are expected to exert opposing pressures over the next decade.

Changes in device usage and the adoption of new technologies also are expected to impact market growth. Finally, revenue distribution within each market is complicated by the use of third-party distributors and the presence of specific agreements or partnerships between device manufacturers.

*estimated by GlobalData across 39 countries

Sudhanshu Gorai is an Analyst for GlobalData Healthcare with expertise in in vitro diagnostics. He also has significant experience in the orthopedics and dental markets. His work includes developing market models based on in-depth secondary and primary research, providing market insights and estimates, and competitive assessment. Prior to joining GlobalData, Sudhanshu worked as a marketing executive with Lupin Ltd (Neuro Psychiatry). He holds a Post Graduate Diploma in Pharmaceutical Management from Institute of Health Management Research (IHMR University, Jaipur).

Alison Casey is a Medical Devices Analyst at GlobalData Healthcare with a focus on Neurology Devices and In Vitro Diagnostics. Her work collates information from primary participants, key opinion leaders, and secondary sources with real world data to analyze and forecast specific device markets across 39 different countries. Alison has a PhD from Imperial College London and a strong history of work in oncology. Before joining GlobalData, she worked as a post-doctoral fellow at Princess Margaret Cancer Centre, Toronto where she established collaborations with clinical experts and industry personnel, giving her a thorough understanding of the Canadian healthcare system.

Eric Chapman is a Medical Devices Analyst at GlobalData Healthcare, with a focus on In Vitro Diagnostics. He has a strong knowledge base in cancer biology, and has experience at GlobalData modelling, assessing, and forecasting various disease markets. Before joining GlobalData, Eric completed a PhD in Molecular Genetics from the University of Toronto. His work included the study of multiple cell signaling pathways that are relevant to tumorigenesis, cell death, and neurological disorders.