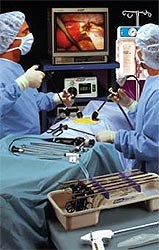 The U.S. Food and Drug Administration (FDA) has approved through the de novo classification process PneumoLiner, a first-of-its-kind tissue container bag for use in certain laparoscopic power morcellator procedures to isolate uterine tissue that is not suspected to be cancerous.

According to the FDA announcement, the PneumoLiner device consists of a containment bag and a tube-like plunger to deliver the device into the abdominal cavity, where the tissue to be removed is placed in the bag and the bag is sealed and inflated. The bag is impermeable to tissues, cells, and body fluids, and has enough space for the surgeon to perform morcellation.

Power morcellators are devices used in laparoscopic surgeries to remove the uterus (hysterectomy) or to remove uterine fibroids (myomectomy) to divide or mince tissues into small fragments or pieces. FDA previously warned that the use of said devices could inadvertently spread uterine cancer cells through adjacent body areas, such as the abdomen and pelvis, and the Administration discourages their use in the majority of cases. The FDA estimates that about 1 in 350 women who undergo a hysterectomy or myomectomy for fibroids could have an unsuspected uterine sarcoma.

FDA is allowing the use of PneumoLiner, but the device is only permitted when the uterine tissue to be morcellated is not suspected to be cancerous before surgery, and only for women without uterine fibroids undergoing hysterectomy, and some pre-menopausal women with fibroids who want to maintain their fertility. It should not be used to remove uterine tissue containing suspected fibroids in patients who are: peri- or post-menopausal; or candidates for en bloc tissue removal, for example, through the vagina or via a mini-laparotomy incision.

In addition to the narrow indication, FDA requires the labeling for PneumoLiner to carry the following boxed warning, which is similar to the recommended warning for laparoscopic power morcellators: “Information regarding the potential risks of a procedure with this device should be shared with patients. Uterine tissue may contain unsuspected cancer. The use of laparoscopic power morcellators during fibroid surgery may spread cancer. The use of this containment system has not been clinically demonstrated to reduce this risk.”

William Maisel, M.D., M.P.H., deputy director for science and chief scientist at the FDA’s Center for Devices and Radiological Health (CDRH), said in a statement, “We want to be clear that, although the device has been shown to successfully contain morcellated tissue, it has not been proven to reduce the risk of cancer spread during surgery.”

According to FDA, known risks of the PneumoLiner device include dissemination of shredded tissue, injury to surrounding tissues or organs, and infections.

“The PneumoLiner is intended to contain morcellated tissue in the very limited patient population for whom power morcellation may be an appropriate therapeutic option – and only if patients have been appropriately informed of the risks,” said Maisel. “This new device does not change our position on the risks associated with power morcellation. We are continuing to warn against the use of power morcellators for the vast majority of women undergoing removal of the uterus or uterine fibroids.”

FDA in 2014 warned against using power morcellators for surgical purposes because of serious risks, such as the spread of cancer, according to Reuters. As a result, Johnson & Johnson immediately suspended the worldwide sales of its morcellators. J&J and other manufacturers have faced multiple lawsuits linking the devices to cases of metastatic cancer.