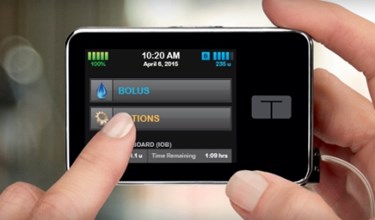 The newest option on the insulin pump market comes with a touch screen and optional continuous glucose monitoring (CGM). The U.S. Food and Drug Administration (FDA) has approved Tandem’s t:slim G4 Insulin pump for diabetic patients age 12 or older.  The new pump combines features of the t:slim with Dexcom’s G4 PLATINUM CGM system, designed to simplify diabetes management into one integrated device, and it is expected to ship in October.

The t:slim G4’s touchscreen was designed to look and operate like a smartphone, and it eliminates the patient’s need to scroll and punch buttons to locate and use the pump’s features. Users can monitor the amount of insulin left in their cartridge, battery life, and the status of the pump and bolus from the home screen.

For added safety, Tandem has included several features to prevent unintentional actions, including a lock screen, software that will lock the screen automatically if it detects accidental taps, and confirmation screens before insulin delivery or changes to the settings.

While the t:slim G4 can operate as a standalone device, users may elect to incorporate the Dexcom sensor that tracks glucose continuously. Steve Pacelli, executive VP of strategy and corporate development at Dexcom, called this feature a key component of next-generation insulin pumps.

“CGM integration has been one of the most requested features since the launch of the t:slim pump,” said Blickenstaff. “The addition of t:slim G4 to our product family allows us to address a wider variety of diabetes management needs through the broadest range of insulin pump options available from one company.”

In April, Tandem commenced shipments on the t:slim and t:flex insulin pumps with newly updated software and added features to enhance the product’s convenience for diabetic users.  In an April press release, Tandem also announced its intention seek FDA for approval for additional enhancements.

“Innovation is at the heart of our company, as is listening to our customers,” said Blickinstaff. “As we enhance our products, we want to offer the new features to our existing customers as quickly as possible.”

Recent analysis released by Allied Market Research estimated that the global market for CGM systems reached $194.8 million in 2012 and is expected to reach $568.5 million by 2020. The report attributed growth to advancements in technology and the additional convenience of CGM over self-monitored glucose devices.