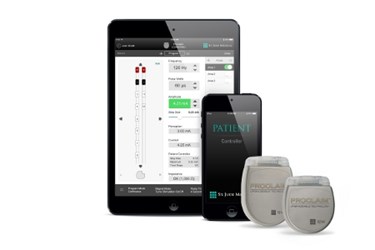 St. Jude noted in a press release that the design of the Proclaim Elite SCS was based on feedback collected from patients and physicians, who wanted a system that did not require regular recharging or replacement when technology updates — such as new waveforms or software innovations — were released onto the market.  For added patient convenience, the system is approved for conditional magnetic resonance (MR) labeling, which allows patients implanted with the device to safely undergo MRI testing of their head and extremities.

Last June, Eric Fain, group president of St. Jude, told the Star Tribune that the imminent launch of the Proclaim Elite SCS would introduce several “industry-first” features, chief among them a Bluetooth-enabled  system that connects to Apple consumer electronics, which are already incorporated into many patients’ daily lives. A specially designed clinician programmer allows doctors to adjust their patients’ therapy with an Apple iPad mini.

“Ease of use is critical for all medical devices,” said Fain. “In particular, when this type of device is being used by the patients themselves, ease of use is particularly critical.”

In July, St. Jude launched the Invisible Trial system, which allows patients to test drive the therapy before the device is permanently implanted. This system is similarly streamlined with Bluetooth technology to ensure cumbersome equipment does not interfere with the patient’s evaluation of the treatment.

Timothy Deer, president and CEO of The Center for Pain Relief in Charleston, West Virginia, called the Proclaim Elite System “a needed advance for both patients and physicians who now have access to a low-maintenance chronic pain treatment that can reduce interference with daily activities.”

Many SCS innovations in recent years have addressed recharging issues, but few have considered ways in which the technology could encourage therapy compliance, said Deer. The Proclaim Elite, he added, “can offer appropriate patients an optimal low-maintenance experience while enabling access to future therapies without the need for additional surgeries.”

According to a World Health Organization (WHO) bulletin, low back pain is a leading cause of disability worldwide, interfering with quality of life and work productivity. While many chronic cases are due to injury, most cases are non-specific. A study published in the Journal of American Medical Association (JAMA) estimates that the condition costs the U.S. economy between $100 billion and $200 billion in healthcare related costs and loss of productivity each year.