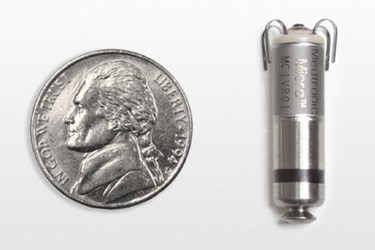 Uncertain of the safety and efficacy of pioneering leadless pacemakers, a U.S. Food and Drug Administration (FDA) panel recommended the novel devices and the patients who receive them be studied extensively for the duration of the devices’ battery life. The panel also stressed physician training to reduce potential complications related to the implantation procedure.

The General Issues Panel Meeting on Leadless Pacemaker Devices of the Medical Devices Advisory Committee had called a hearing to elicit recommendations from manufacturers on how to better regulate leadless pacemakers. The purpose of the meeting was not to approve said devices, but for FDA to learn more about how companies would design and conduct clinical trials, train physicians, monitor adverse events, and collect post-approval study data.

Among other things, the panel was concerned with groin complications, hematoma, and vascular issues 24 hours post-implantation, particularly the unknown incidence of cardiac perforation related to leadless pacemakers.

“Cardiac perforation is a big deal to me, because it is potentially lethal,” said panel member and New York cardiologist Dr. Jeffrey Borer, according to the Star Tribune. “It looks as if there are about 50 percent more perforations with the leadless pacemaker.”

Medtronic VP Dr. David Steinhaus reportedly claimed that the “company’s data suggest the rate is within the limits of previous trials,” while St. Jude representatives noted that “complications declined after they revised their training and implantation guidelines in European trials.”

Nevertheless, in order to mitigate perforation and related complications, the panel recommended that companies conduct a robust training program for doctors who implant leadless pacemakers.

“Although I believe perforation is a concern, I think proper training and care will decrease that rate. And I believe modifications of the devices over time will be important,” said panel member Dr. Jeffrey A. Brinker, of Johns Hopkins Hospital, according to Medscape. “At the end, I think the net benefit over alternative devices in this particular group of patients needs to be the determinator, not a specific end point like the perforation data.”

In addition, several panel members reportedly recommended the creation of a registry for patients implanted with the device to capture unpredicted complications.

Aside from adverse events, the panel wants to address the uncertainty over how safe and effective leadless pacemakers remain for the duration of battery life.

The panel's executive summary had recommended that post-approval studies follow patients out to at least five years after implantation to set a baseline of long-term performance of leadless pacemakers.

During the hearing, however, the panel did not specify an exact number of years for a post-approval study. It instead recommended that both patients who receive new devices and those who already have these leadless pacemakers should be followed beyond the point of battery expiration — typically 6 to 12 years, panel member Dr. E. Magnus Ohman of Duke University Medical Center, told TCTMD.

Medtronic's Micra and St. Jude’s Nanostim are the first leadless pacemakers up for FDA approval, which each company hopes will be granted by the end of this year. Both devices are CE-Marked in Europe. Boston Scientific and Biotronik are known to be at earlier stages of developing similar devices.

“I think this is a very disruptive technology and it is at the beginning of a long career that we can’t predict,” said panel member and New York cardiologist Dr. David Slotwiner, according to the Star Tribune.