Finally, A Heart Valve For Children 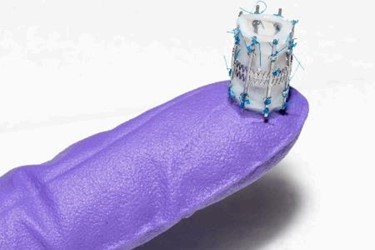 Each year 40,000 babies in the U.S. are born with a congenital heart defect, often caused by a defective heart valve, which is estimated to account for 8,000 to 13,000 new cases in the U.S. alone. Because there are no heart valve prosthetics on the market designed specifically for young children, children typically undergo three to five major surgeries before adulthood to replace valves that fail or that they outgrow.

Corin Williams, Senior Member of Draper’s Technical Staff, leads a team that is developing a new kind of pediatric heart valve. “For too long children with heart defects were limited to valves designed for adults or without proper consideration for the needs of children,” Williams said. “Draper’s solution is a pediatric heart valve that will adapt to a child’s growth.”

The design of Draper’s pediatric heart valve (PHV) is such that it will “grow” with the child, with at least a two-fold diameter expansion. The initial goal is to serve the most critical unmet need, which are children as young as infants through age six, who require valve diameters less than 15 millimeters, as opposed to 18 to 30 millimeters for adults.

“Our long-term goal is to develop the first true pediatric heart valve that can non-invasively adapt to changing valve diameters with the child’s growth,” said Williams. “We envision this technology serving a majority of the pediatric population ranging from infancy to six years old, while eliminating the need for at least one surgical or invasive procedure to expand or replace the valve. We are working closely with pediatric clinicians, including a team led by Dr. Sitaram Emani at Boston Children’s Hospital, to design the PHV to fit their specific needs and hopefully increase the number of centers that can perform valve replacements in children.”

“Heart valves designed for adults often require significant modifications for children,” Dr. Emani said. “In some cases, a surgeon in the operating room might need to shorten or remove parts of the stent, adding a suturing skirt and anchoring one end in the ventricle to minimize movement. In addition, adapting the valve to the child’s growth is done through forceful expansion with a balloon catheter, which involves an invasive procedure, anesthesia and a hospital stay on average every 14 months. Neither approach is optimal, which is why a new approach to developing a pediatric heart valve is needed.”

The engineers at Draper in consultation with BCH produced two promising design concepts, along with the computational models of the stent designs, and fabricated and tested the first-generation prototype. Draper hopes to complete ex vivo testing and design revision before moving into a growing animal model for proof-of-concept of function.

An interdisciplinary team at Draper is developing the growth-adaptive stent for the pediatric heart valve under a company program called Engineering Impact that brings together world-class life, physical and social scientists and engineers to address meaningful problems. Under the Engineering Impact program, Draper is collaborating with ConservationX to create a prediction system for coral bleaching that will help identify reefs at risk substantially earlier than any current technology and allow mitigation attempts with greater chance of success. Another project within Engineering Impact teams Draper with government scientists and engineers to develop a real-time measurement system for plastic particle pollution in the ocean.

“The pediatric heart valve is a great project for Draper’s Engineering Impact,” said Sheila Hemami, Director of Strategic Technical Opportunities at Draper. “Draper is actively seeking both technical and funding partners for the next important steps in bringing this device to the children who need it—taking the device through animal testing and FDA approval.” Hemami noted that Draper’s not-for-profit status enables the company to work on problems in domains in which traditional return on investment would be a limiting factor for other providers of advanced engineering solutions.