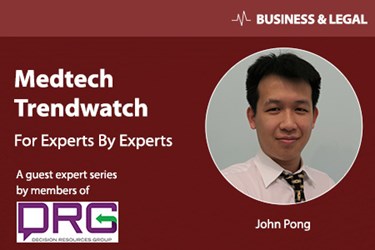 China has experienced a strong economic boom in the past 10 years, and many industries in China have benefited as a consequence. The medical device industry in China is no exception, growing at an average rate of 20 percent annually since 2009, and it is expected to reach almost RMB $300 billion (USD $45 billion) this year.

However, China’s economy is expected to experience its first downturn in a number of years. We will discuss how this and other recent trends may affect the medical device industry in China, both now and in the future.

The driving factor of growth in China’s medical device industry has primarily been its status as the world’s most populous nation, home to an economically robust population whose average age is steadily increasing.  In response to its growing population — and the increasing number of its citizens prone to age-related afflictions — the Chinese government has made major efforts in the last decade to improve the healthcare infrastructure and the healthcare insurance offered to Chinese citizens.

The Chinese medical device industry has primarily been separated into two categories in the past: 1) The domestic manufacturers, who mainly develop low- to mid-tier products at a lower price than their foreign counterparts; and 2) the foreign-imported, premium-priced products supplied by large multinational corporations (MNCs). These manufacturers target very different segments of China. MNCs and their more expensive products dominate the market in China’s major economic hubs, such as Beijing and Shanghai, as the population in those areas can afford the price of more reputable products. On the other hand, domestic products dominate the market in less developed parts of China and lower-tiered hospitals (tier 2 or below hospitals and clinics), where MNCs can’t overcome the price competition from their local counterparts.

The market potential outside of China’s major cities has drawn many local companies to target this sector. China had a total of 17,800 domestic medical device manufacturers in 2013, mainly suppliers of low to midrange products, many of whom are market leaders in China due to their dominance in these less-developed cities and lower-tiered hospitals. A number of these local companies — such as Weigao Group, Microport, and Shenzen Mindray — have developed into strong competitors against their foreign counterparts based on their products’ strong reputation in, and domination of, the lower-priced markets.

Many of China’s domestic manufacturers have built upon their strong local reputations to become growing forces in the global market. In fact, the market value of exported Chinese medical devices is larger than that of imported medical devices: China’s medical device exports were estimated at RMB $21 billion (USD $3.3 billion) in 2014, while device imports topped out at RMB $18 billion (USD $2.8 billion) that year. Still, the Chinese export market has grown at a rate of about 10 percent annually for the past few years, while the import market has grown at a rate of around 30 percent annually since 2010. 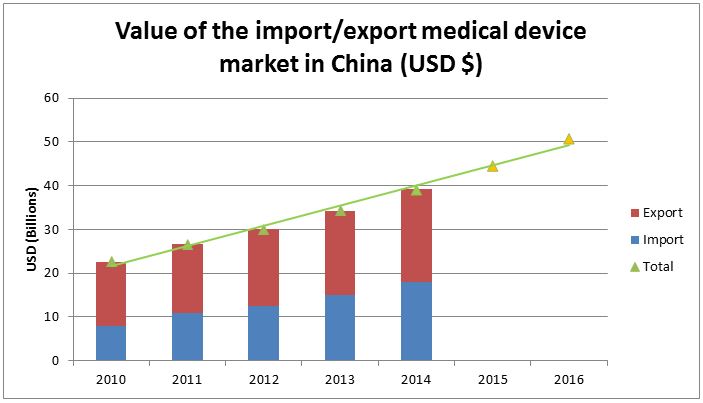 China has taken massive strides to improve its healthcare system over the past few years. The Chinese government has invested over RMB $2.2 trillion (USD $359 billion) in the past five years to improve China’s device regulations and harmonize them with regulations used overseas, such as the U.S., Japan, and the European Union (EU).  These changes also aim to improve local medical device innovation, spur growth among local medical device suppliers, and attract more foreign medical device manufacturers to enter the Chinese market. Notable changes include:

Earlier this year, the China Food and Drug Administration (CFDA) also revised its good manufacturing practice (GMP) regulations. The new regulations require improvements to product tracking, storage and transport, and after-sale support. The new regulations also reserve for CFDA the right to carry out unannounced inspections and to dish out heavier penalties for noncompliance. These regulations are aimed at improving the quality of local products, as well as bringing higher transparency to all products that are registered. Overall, these changes are expected to help improve the quality standard and reputation of exported Chinese medical devices, as well as promote a more competitive local device market.

Medical device purchasing decisions in China, particularly among lower cost products, are largely dictated by two determining factors: Tendering and reimbursement. Although the Chinese government has been attempting to refine the tendering and reimbursement processes, those processes take place largely at the provincial level and are oftentimes nontransparent, so changes have been slow to take place.

This delayed tendering and reimbursement streamlining has been a significant limiting factor in the growth of China’s medical device market, especially for emerging products or technology, as current criteria for entering the list selection process, which are often set very low, effectively make it more complicated for technologically advanced products to explain their advantages compared to less expensive products that merely meet the set criteria. Furthermore, as China cracks down on corruption in multiple industries including healthcare, changes to the nation’s tendering and reimbursement lists have stagnated; officials and panel experts do not want to risk investigation on themselves by approving new products, which could open them to risks of accusations of receiving benefits. As a result, of late, most of these officials and panelists play it safe by avoiding changes to the lists.

Companies that plan to launch new products in China, and to enter the medical device tendering and reimbursement lists, may want to take note of this and adjust their strategies accordingly.

As stated in my introduction, many expect China’s recent economic boom to wane – or cease - and forecast a drop in the Chinese market.  A number of changes are expected to occur, including heavy hits to the retail and financial sectors. However, for reasons described below, China’s medical device market is not expected to suffer as much as other sectors.

Firstly, China has become a major supplier of medical devices in the world. If the overall Chinese market should crash, we could expect a number of difficulties to affect the medical device industry — price hikes of imported raw material due to a weak RMB, a massive drop in research funding, and reduced spending by the general population — but the industry will survive due to recurring demands in the health sector, and such a market crash actually could help growth in the local medical device sector.

The reason for this, primarily, is because China is a massive producer of raw materials that is self-sustaining in most cases. Also, since China is a major exporter of medical devices, a weaker RMB could drive the down the overseas price of Chinese-made products, which could generate additional overseas sales. Finally, since recent policy changes have driven up local companies’ quality control and operating costs, major local companies in this sector have consolidated their power within their respective industries, leading to increased local sales as well as exports.

Given the Chinese government’s recent policies to encourage local innovation, we can expect local manufacturers to contribute to continued growth in the overall medical device sector. And, since healthcare is essential in all communities — especially an aging population like China’s — we do not expect a decrease in demand for the lower to medium-tier medical devices dominated by local companies.  In fact, we expect sales of these lower-priced products to increase as more individuals choose lower-priced local products over higher-priced imports due to the increased financial pressure experienced by the public (in an economic downturn).

In contrast to local companies, foreign companies in the Chinese medical device market likely will experience some difficulties. Since their products, especially those in the lower and middle tiers, are generally more expensive than locally developed ones, these companies could lose part of their market share to burgeoning local companies.

However, some recent changes are expected to help increase sales of foreign devices in China. While implementation has been sluggish, CFDA has been streamlining the previously unreliable registration process of medical devices; it has also improved the GMP regulations, leading to better quality services among distributors of imported products in China. On the other hand, not all MNCs have to import their products to China.

A large number of MNCs own major manufacturing plants in China — Siemens and Johnson & Johnson among them —and they are expected to reap the benefits of the same initiatives aiding local device suppliers and developers. While these companies have previously focused their efforts in major regions like Beijing and Shanghai, there is huge potential for growth in the areas outside major cities. Recent trends have seen MNCs shifting their focus to include these lesser areas of China.

In addition, the Chinese government has been increasing its effort to improve a number of areas in the healthcare sector, including in-vitro diagnostic equipment; implant/intervention material and artificial organs; medical diagnostic and imaging equipment; and healthcare IT-related equipment and products, all of which are high-tech areas dominated by foreign companies. All of these factors could drive the expansion of foreign companies in China, as well as the country’s overall medical device market value.

Although the overall Chinese market remains unstable, the general outlook for the Chinese medical device market could still be optimistic. There are a number of factors that could contribute to growth within the sector, mitigating the difficulties wrought by a financial downturn. China’s medical device sector could very well come out of a nationwide financial crisis scratched more than damaged. However, foreign companies should be diligent regarding China’s policies going forward, as the country, which has a culture that is known to favor local entities, could act to protect its local companies once the economy goes south.

John Pong, Ph.D., is a market research analyst at Decision Resources Group. He is posted in the Asian branch located in Hong Kong. He has authored and contributed to several reports in the orthopedic, cardiovascular, and laparoscopic device markets for the China Medtech Insights division of the company. John Pong holds a doctoral degree from the University of Hong Kong and a master’s degree from the University of Auckland.