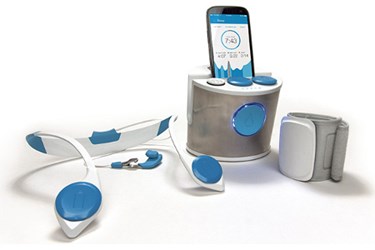 Canadian startup Cloud DX unveiled a working prototype of its all-in-one diagnostic device at the recent South by Southwest (SXSW) Festival in Austin, TX. Cloud DX is one of 10 finalists in the Qualcomm Tricorder XPRIZE competition, which will award $10 million to a team that develops a mobile, consumer-friendly device capable of diagnosing 15 diseases and monitor vital signs for 72 hours.

Cloud DX revealed its device months ahead of the June 1, 2015, prototype deadline for the competition, which takes its name from the fictional handheld medical scanner in  Star Trek. The goal of the contest is the development of an easy-to-use smart device capable of precision diagnostics and health monitoring for American consumers.

IEEE Spectrum got a preview of the first tricorder device at SXSW and spoke to Robert Kaul, CEO of Cloud DX, who described the four main components of his company’s design.

Cloud DX plans to market this component separately as an advanced fitness tracker called Vitaliti. According to Kaul, the more advanced settings and capabilities can be disabled until the device receives FDA approval. Once approved, Cloud DX can enable the more advanced features for existing users of the device.

The second component is a base station with a smartphone or tablet display that serves as a hub for collected information and connects to a cloud-based system that provides analysis of the results.

A universal diagnostic stick and a combination scanning wand, the third and fourth components of the design, also connect to the base. The universal diagnostic stick test can draw a finger-prick of blood and analyze it for conditions such as diabetes, pneumonia, or tuberculosis. The scanning wand, roughly the size of a lipstick container, can function as an otoscope and spirometer, and is fitted with a camera that can examine skin wounds or lesions.

As the Tricorder device moves out of the realm of fantasy and into reality, many experts wonder if it’s a good idea to place this amount of health monitoring capability in the hands of consumers who lack medical training.

Last August, Richard Seabrook, head of business development at the Wellcome Trust health charity, told the BBC that there was a “debate to be had” before a device of this kind entered the market, and that efforts must be made to educate and train the patients who would potentially use it.

Seabrook did concede that many physicians might appreciate a computer’s assistance with simpler cases, because it would give them more time to focus their attention on patients with more complex issues.

Starting in June, all 10 Tricorder device prototypes in the will undergo six months of rigorous consumer testing at the UC San Diego Medical Center – Hillcrest and will be judged by a panel of device experts. The winner will be declared in January 2016.

Grant Campany, director of the Tricorder XPRIZE, remarked during the SXSW presentation, “This will be a practical demonstration of what the future of medicine will be.”