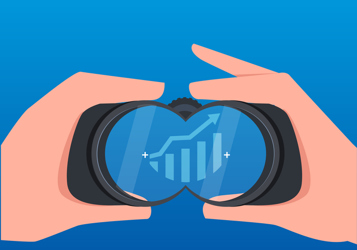 Extracorporeal membrane oxygenation (ECMO) is a form of life support intended to increase the survival rate of patients in severe condition through the provision of heart and lung support. ECMO is increasingly being used to treat severe state diseases, such as cardiogenic shock and acute respiratory distress syndrome (ARDS). In addition to the rapid outbreak of COVID-19, where ECMO has ensured the survival of numerous patients in critical condition, the market opportunities for ECMO are expected to rapidly change.

This article will explore how COVID-19, along with key clinical trials, will ultimately change the ECMO market in future years through an assessment of high-, mid-, and low-level adoption scenarios, and how this market will change for pandemics in the future.

The Role Of ECMO During The H1N1 And COVID-19 Pandemics

ECMO has been available for many years, and in the 2000s it was infrequently used as a primary or adjuvant therapy. This changed drastically with the publishing of the CESAR trial,1 which coincided with the H1N1 global pandemic. The H1N1 influenza caused an epidemic of critical illness, with some patients developing ARDS. The CESAR trial assessed the efficacy of ECMO therapy compared to ventilator support for treating respiratory failure, and the published results directly influenced the adoption of ECMO in ICUs and supported the idea of treating H1N1 induced ARDS with ECMO.

Countries influenced by the trial included Australia and New Zealand, where ICUs demonstrated the positive outcomes of ECMO. There were 200 ICUs treating H1N1 in Australia and New Zealand, but only 15 ICUs treated with ECMO, which was able to support a maximum of 24 patients.2 ECMO was prescribed to treat hypoxia, hypercapnia, or both after failures of ventilation and ARDS rescue therapy. ECMO support lasted on average 10 days and was mostly used in young adults with ARDS induced by H1N1, with comorbidities such as obesity, diabetes, or asthma. The mortality rate was 21%, which was notably lower than ECMO used for ARDS initiated by other diseases.2

Treating H1N1 patients, along with key improvements to ECMO circuits and procedures — including heparin-bonded cannulae, rotary pumps, small, efficient long-lasting oxygenators, and improvements to staff training2 — initiated an ECMO boom globally. Prior to H1N1, there were 150 ECMO centers that were Extracorporeal Life Support Organization (ELSO) members, reporting 2,803 ECMO runs. At the end of 2019 there were three times as many centers (463) that are members of ELSO, which reported 5.5 times as many procedures (15,875), with the true number of procedures and centers likely being higher.3

In 2020, ECMO has regained new interest, as it is being used to treat COVID-19 associated ARDS. ELSO reports nearly 3,000 procedures in patients with confirmed COVID-19.4 There have been additional developments in ECMO technology, such as centrifugal pumps replacing rotary pumps, dual lumen cannulae, new cannulation approaches, and improved oxygenators, as well as vastly improved staff training.

Key clinical trials are investigating ways to reduce coagulation and heparin-induced internal bleeding due to ECMO, as well as looking to demonstrate the efficacy of ECMO in new indications. We have identified the following trials with recently published5 or upcoming results as crucial for determining the future success of ECMO: 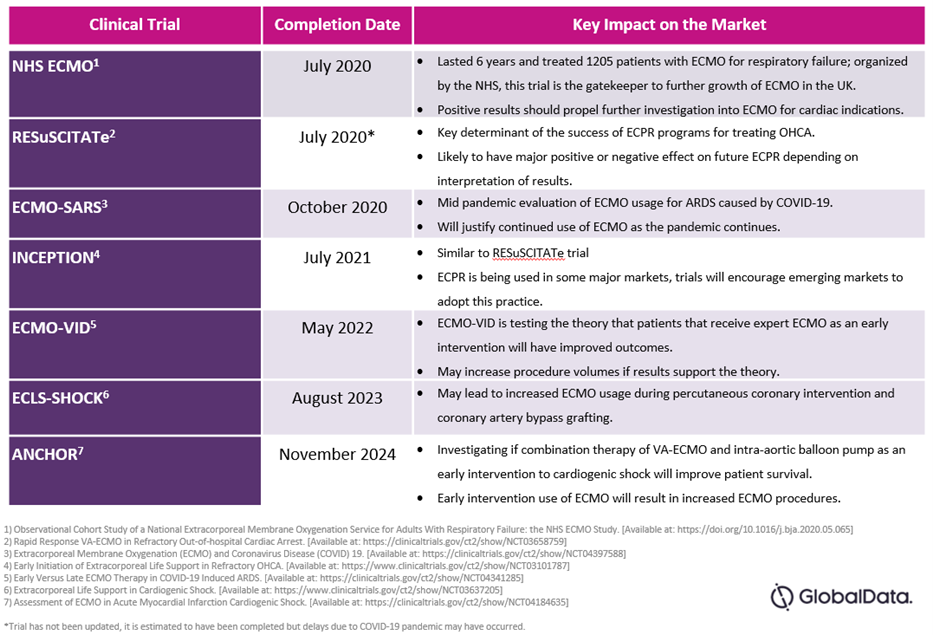 Since the H1N1 pandemic, and now COVID-19, ECMO has been increasingly recognized globally as a way to increase the survival of patients requiring cardiac and respiratory support.

Compared to the West, countries in Asia Pacific have had fewer ECMO procedures due to the later adoption of ECMO. However, Asia Pacific countries have quickly become committed to developing ECMO programs and are expected to experience faster growth in this relatively immature market. Despite the different rates of growth in the East vs. West, the ECMO market is expected to grow quickly over the next eight years.

ECMO’s future outlook depends on a number of factors, including the results of major clinical trials and the growth of resources to support ECMO procedures. Below, we explore high-, medium-, and low-adoption rates for ECMO to determine the overall market opportunity in the East vs. the West. 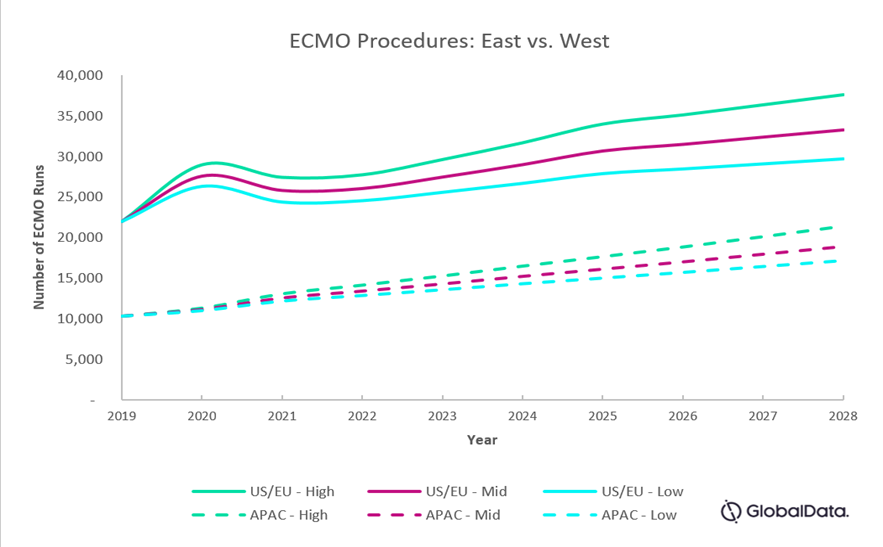 The COVID-19 pandemic, with an increased number of patients with ARDS, is expected to cause a surge in ECMO runs globally between 2020 and 2021. The rapid onset of COVID, however, resulted in an abrupt need for ECMO and not enough lead time for countries to increase capacity and resources, capping the surge of ECMO runs to the capacity of existing facilities and staff.

The West, where there are more facilities in place for ECMO runs, will experience a larger uptick compared to the East, where the market is still young. Despite COVID-19 prompting the need for more ECMO procedures, the limited facilities and resources will result in only a slight uptick of procedures in Asia Pacific markets.

From 2020 to 2021, the high-, medium-, and low-adoption scenarios all depend on the level of need for ECMO during the pandemic. The low-adoption scenario assumes that there is very low need for ECMO due to better management of symptoms despite a second wave in the second half of 2020, and a high-level adoption assumes that ECMO is needed at the same rate or higher in the second half of the year.

In a high-level adoption scenario, we estimate a compound annual growth rate (CAGR) of 6 percent in the West and close to 9 percent in the East from 2021 to 2028.

This scenario assumes that COVID-19 has created many positive opportunities for the market, including:

Other factors that will drive the growth of ECMO even further in a high-level adoption scenario include:

In a low-level adoption scenario, growth is similar to pre-COVID levels despite the slight upsurge from the pandemic, where we estimate a CAGR of 3 percent in the West and 6 percent in the East.

In this scenario, the following assumptions were applied:

This scenario makes the assumption that the pandemic and clinical trials show positive impact; however, the true impact is still minimal:

Interest in ECMO is at an all-time high, as indicated by thousands of journal publications, increased procedure volumes, hundreds of clinical trials, and a continued backlog for ECMO training. We identified opportunities for new manufacturers and current competitors that will shape the future outlook for ECMO.

How Will The ECMO Market Change In The Next Influenza Pandemic?

As discussed in the market assessment section, successful ECMO runs will breed more ECMO runs. Quite literally, “practice makes perfect.” During the H1N1 pandemic, hundreds of patients were treated with ECMO. So far, during the COVID-19 pandemic, thousands have now received lifesaving ECMO therapy. In all market assessment scenarios, ECMO is expected to grow continuously. By the time the next pandemic arises, there will be significant growth in available ECMO centers and personnel. Hospitals are likely to have more ECMO disposables on hand, in order to avoid backlogs in ordering. Key opinion leaders are anticipating some major changes in healthcare that will improve both patient outcomes and the ability to support a higher capacity of patients. It is expected that larger ECMO centers will be established in hub cities that will be staffed solely for the purposes of ECMO support, and patients in smaller cities will be transported to hub centers in order to receive higher quality specialized care.

Richard Hyde joined the Medical Device team at GlobalData in 2020. He is working on the syndicated models for the cardiovascular therapy area and is specialized in peripheral vascular devices. Prior to working at GlobalData, Hyde was completing his Master of Science in pathology and molecular medicine at Queen’s University.

Sheryl Tang is a principal medical devices analyst at GlobalData Healthcare specializing in cardiovascular and neurology devices. She has acquired an in-depth understanding of both markets and currently manages the research and development of syndicated market forecast models across 39 countries, as well as being the lead analyst for cardiovascular or neurology-specific consulting projects. As a Master of Public Health graduate from Queen’s University, Sheryl has a strong background in epidemiology in addition to her expertise in market research.