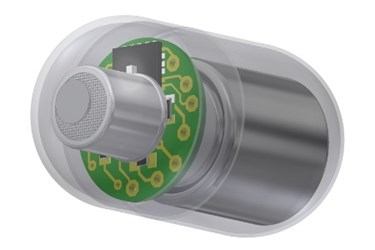 Researchers in Australia are developing a new gas-sensing capsule that can evaluate stomach health and wirelessly transmit results to a smartphone. According to the scientists, the new technology could improve diagnostics and assess gas as a biomarker for overall gut health analysis.

A team from the Royal Melbourne Institute of Technology (RMIT) and Monash University, led by RMIT professor Kourosh Kalantar-zadeh, designed the capsule to be swallowed and passed safely through the digestive system. The device features biocompatible cladding, a gas-permeable membrane, and a gas sensor, microprocessor, and wireless transmitter powered by a battery. According to an RMIT press release, the system is designed to communicate results directly to a smartphone.

Though a similar device already exists to measure methane production in sheep, the capsule designed by the team at RMIT is intended for human use. Currently, noninvasive methods for analyzing gas in humans — such as breathalyzers — have been found to be unreliable, according to the researchers.

Kalantar-zadeh said the a press release that half of all Australians suffer from some sort of stomach ailment each year, but the direct causes were sometimes difficult to diagnose.  Several different gases, he says, can negatively affect a person’s health.

“Being able to accurately measure intestinal gases could accelerate our knowledge about how specific gut microorganisms contribute to gastrointestinal disorders and food intake efficiency, enabling the development of new diagnostic techniques and treatments,” Kalantar-zadeh stated.

Kalantar-zadeh said that the capsule could also be used as a tool to help people tailor their diets to fit their individual bodily needs.

“We’re hoping such a tool helps people to at least go directly to the problem and see what’s happening to the body, rather than just guessing, taking random probiotics, or changing their diet,” Kalantar-zadeh told ABC Australia.

Research shows that intestinal gasses share a link with colon cancer, irritable bowel syndrome, and inflammatory bowel disease. The RMIT team, which published its findings in Trends in Biotechnology, indicated that further study of the gasses could link their presence to other health issues.

In the study, researchers also discussed a second way to monitor intestinal gasses, and noted that their systems could be used to provide more reliable and cost-effective health assessment.