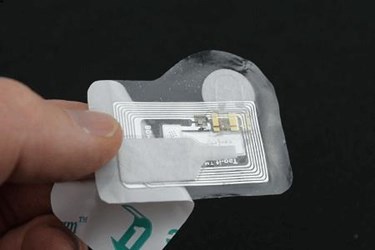 GE researchers are developing an electronic patch that can monitor vital signs and send the data wirelessly to connected devices.

The wearable device is about the shape and size of a Band-Aid, but embedded organic light-emitting diodes (OLEDs) allow the device to analyze sweat and detect heart rate, blood pressure, and blood-oxygen saturation levels, and potentially, electrocardiogram (ECG/EKG) readings, according to GE Reports. The wrist-worn sensor can wirelessly transmit data to a smartphone or any connected device, making it an effective tool to remotely monitor patients at home or elsewhere.

“The same transformation that happened with mobile phones is taking place in patient monitoring,” Erno Muuranto, the engineer leading the effort at GE Global Research, said in the company blog. “The world is going wireless and wearable. We could run hospitals like smart factories. Wireless sensors and data analytics will help correctly diagnose patients in the ambulance. It will allow us to administer correct treatment faster, which could lead to faster discharge. It will also allow us to monitor people remotely from home. All of this will help improve care and costs.”

GE believes that utilizing wearable medical sensors that seamlessly communicate with other devices will become routine within the next five years, and the company is planning to upload the massive amount of health data from these sensors to its cloud-based service.

“This will really improve patient experience and get doctors better data about patients,” Anil Duggal, chief scientist at GE Global Research, which is developing the wireless skin sensor with the support of the Nano-Bio Manufacturing Consortium and the U.S. Air Force Research Laboratory.

Duggal and team are not stopping at vital signs monitoring, though. They are using their knowledge in flexible electronics and the company's resurrected OLED technology to test these patches via ongoing clinical trials to monitor hydration levels of people during exercise, and later, to monitor stress levels. The GE researchers are also exploring ways to merge soft, organic semiconductors with human tissue, which could enable the development of neural implants to treat epilepsy, for instance.

Device development is heating up for wearable biosensors, which have now demonstrated the capability to monitor not only vital signs, but blood alcohol and blood glucose levels as well. These devices theoretically could even deliver drug treatments when needed. GE is not the first or only device maker in the space, however. Earlier this year, rival Philips launched a wireless, wearable, medical-grade biosensor designed to measure vital signs in low-acuity clinical settings. Silicon Valley startup Vital Connect already has its FDA-cleared, disposable biosensor device called HealthPatch on the market.