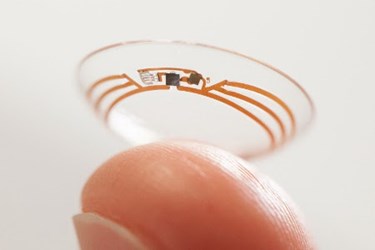 The growing field of wearable medical technology took another interesting turn last week when Google announced its smart contact lens project. The goal of the project, run by the secret Google X lab that brought us Google Glass, is to develop a contact lens capable of providing noninvasive, continual monitoring of glucose levels for diabetes patients.

According to a blog post by project co-founders Brian Otis and Babak Parviz, the Google smart contact lens uses “a tiny wireless chip and miniaturized glucose sensor that are embedded between two layers of soft contact lens material.” A tiny hole in the lens allows tears to flow over the sensor. Google is testing prototypes that can generate a reading once per second.

“We’re also investigating the potential for this to serve as an early warning for the wearer,” Otis and Parviz wrote. “So we’re exploring integrating tiny LED lights that could light up to indicate that glucose levels have crossed above or below certain thresholds.”

Google is currently in discussions with the FDA regarding the smart contact lens and plans to form partnerships to help bring the technology to market. Ultimately, Google developers hope for the lens to be used in conjunction with apps “that would make the measurements available to the wearer and their doctor,” most likely on handheld monitors or smartphones.

Google isn’t the only company exploring alternative ways to measure glucose levels in tears. EyeSense has developed a miniature sensor that can be implanted in the eye, and Freedom Meditech offers tear glucose monitoring through the use of light beams.

For some, Google’s announcement is an indicator of important technological trends for the upcoming year. “Wearable technology is, without doubt, the biggest and most exciting technology trend at the moment,” reports The Sydney Morning Herald. “In 2013, companies showed us that these devices can actually be used to improve day-to-day life; and 2014 is shaping up to be a landmark year for wearable gadgets.”

With estimates that 382 million people worldwide and 25.8 million Americans have diabetes, non-invasive alternatives to traditional blood glucose tests would be significant, and wearable technologies may be one possible solution.

As wearable devices like Google’s smart contact lens move increasingly into the medical field, however, cybersecurity becomes a heightened concern. “One thing I do worry about is mobile security itself. It is a miasma, and the app that’s developed to use with this is probably going to be made by someone else,” Joseph Lorenzo Hall, chief technologist at the Center for Democracy & Technology, told The Washington Post. “Whoever is making that app will have to answer those questions. But they haven’t been answered yet because we haven’t gotten that far down the line.”