Grateful Patients Turn The Spotlight On You! 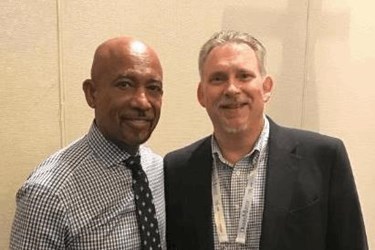 When was the last time someone expressed gratitude for the work you do? I don’t just mean a simple “thank you” for completing a task or deliverable. I’m not even talking about receiving a bonus because your company hit its performance targets this past year. Being told “thank you” is important and getting a bonus is very nice, but I am talking about something deeper and more meaningful.

When was the last time a user of your product experienced such an improvement in their quality of life that they came to you, in person, to say how much they appreciate you? They wanted to acknowledge the effort you make each and every day at your job to put new diagnostic or therapeutic technologies into the hands of those who quite literally change people’s lives. Well, that is exactly what happened at the Life Sciences Future event in Philadelphia.

This gathering, coordinated by Life Sciences Pennsylvania, is the annual conference for the life sciences community in the mid-Atlantic region. The event reflects the rapidly-evolving landscape in healthcare, and its agenda is developed in conjunction with many Life Sciences Pennsylvania members. I was co-chair of the topics and speakers committee, but in spite of appreciating every speaker and presenter at Life Sciences Future, nothing could have prepared me for the Patient Spotlight segment with Montel Williams and Jeri Lake. The segment was unexpected, impactful, and thoroughly appreciated by all in attendance.

The Patient Spotlight segment began with an introduction by Phil Deschamps, president and CEO of Helius Medical Technologies. Deschamps provided background on his company’s portable neuromodulation stimulator (PoNS), an investigational, non-invasive wearable medical device being studied for the treatment of neurological symptoms caused by disease or trauma. The PoNS had just completed a clinical study for mild to moderate traumatic brain injury, and Deschamps was awaiting the data he hopes will support submissions to market in the U.S., Canada, and elsewhere. He then switched gears, introducing his friend and business partner, Montel Williams.

Mirroring the opening of the long-running, Emmy Award-winning Montel Williams Show, walk-up music blared and Montel came walking up from the back of the room, wireless microphone in hand, and took control of the audience. Recognizing that he caught the audience just a little after lunch, Montel was not going to talk to a “lazy” crowd. He got us on our feet, stretching and massaging the shoulders of the people on either side of us. Then, just as abruptly, Montel had us sit down.

His demeanor became more serious and he shared some of his struggles since being diagnosed with Multiple Sclerosis (MS) in 1999. He talked about his efforts to support research initiatives aimed at treating MS, and the events that eventually led him to Helius Medical Technologies. Montel became very interested in the PoNS device, because it promised the potential to rehabilitate lost function for people with MS, as well as other diseases and injuries.

From the beginning of Montel’s discussion about his own experience with PoNS, he made it very clear the device was not yet cleared in the U.S. and does not yet have published results from a clinical study with MS patients. He repeatedly reminded the audience that the results he experienced may be unique to him, and are essentially a sample size of one. “Based on an N of one,” Montel said, he began using the PoNS three times a day, in conjunction with specific activity routines and exercise to retrain his brain.

Using the PoNS in this manner greatly improved his balance and gait, Montel said, enabling him to run again and get back into shape. I will say the 61-year-old Former Marine and lieutenant commander in the Navy looked strong and in good health when I had the chance to chat with him afterward. But Montel was not there to say, “look at me.”

It’s Not About Me, It’s All About You…

Montel Williams came to Life Sciences Future to say thank you to people like you, who work in the life sciences and medtech industries. Montel acknowledged that, some days, it might seem like a tedious and thankless job. But, what you do is very important to him and to so many others who experience the relief of pain, the restoration of function, or any improvement in their quality of life because of the work you do to commercialize new technologies. Montel was visibly emotional as he thanked the attendees. The patient spotlight segment of the event (and this story) could end right here and it would be great. I actually thought it was over at that point, but no. Montel always had something bigger and better up his sleeve, and he proved he still is the consummate showman.

Montel Williams introduced Jeri Lake to the audience. Lake suffered a traumatic brain injury (TBI) during a cycling accident in 2005, leaving her with devastating neurological damage. Three years of rehab brought little to no improvement, and there was nothing more to be done. During this time, Jeri suffered greatly: she was depressed, unable to tolerate loud noises, and barely able to walk due to balance issues.

But all of that began to change in 2010 when she was introduced to the PoNS. Jeri tried the new technology and was videotaped working with the PoNS device. A compilation video of vignettes from her first week was shown to the Life Sciences Future audience and acknowledged with a standing ovation. The progress Lake made in just one week was astonishing. On day one, she was barely able to step over a small (several inches high) obstacle in her path. By the end of the week, she was jogging.

Lake’s story is inspirational, but again, she attended the event for one reason: she wanted to say “thank you” to people who work every day to make recoveries, like the one she experienced, possible. Lake’s sentiment was simple and motivational: “Thank you for giving me my life back.”

Check back on Med Device Online again soon; I had an in-depth interview with Deschamps just weeks before the Life Sciences Future event, but I was unable to complete the article due to my travel schedule. The article will cover the technology in greater detail, and Deschamps shares his perspective and discusses the challenges in getting this technology to market.  Stay tuned…