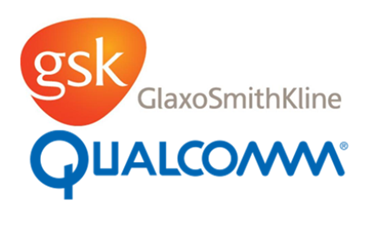 Talks between the two companies to form a partnership to develop medical technology are "preliminary and nothing has been decided", reports Bloomberg, citing unnamed sources privy to the information. The Financial Times says the deal could be worth as much as $1 billion, and GSK reportedly has hired lawyers to help negotiate the terms of the joint venture with Qualcomm. If confirmed, FT expects the companies "to pool financial and human resources in a joint effort to develop new technology for use in the pharmaceuticals industry."

Further details are sparse, and both companies declined to comment when asked by the news outlets.

GSK is betting big on bioelectronics, or "electroceuticals" — a new class of medicines apart from pills or injections which are miniaturized implants that modulate nerve impulses to treat symptoms of multiple conditions.

"We believe that one day, tiny devices, smaller than grains of rice, could be used to restore health in a range of chronic diseases centred on organs and biological functions," states GSK on its website. "These devices would be programmed to read and modify electrical signals that pass along nerves of the body, including irregular or altered impulses that can occur in association with a broad range of diseases."

Recognizing the potential of bioelectronics to revolutionize medicine, the Defense Advanced Research Projects Agency (DARPA) is running the Electrical Prescriptions (ElectRx) program to study the body's electrical circuits and make nanoscale devices that can be implanted or injected into the body to modulate the peripheral nervous system’s response to sickness or trauma.

GSK is a pioneer in this field. The company created the $50-million venture capital fund Action Potential Venture Capital to back start-ups developing novel technologies and devices utilizing bioelectronics. Investments include SetPoint Medical, developer of a neuromodulation implantable device that stimulates the vagus nerve to treat autoimmune disorders, such as rheumatoid arthritis. In addition, the company website says GSK funds more than 30 bioelectronics research initiatives around the world, focusing on "neural signal analysis for recording data-sets, higher resolution interfacing for the targeted disease nerves, and circuit mapping/tracing."

Qualcomm has been actively pursuing deals with players in the healthcare field to use its ecosystem of connected medical devices. In the pharmaceutical industry, these deals include a collaboration with Roche on remote patient monitoring applications using medical devices, and a partnership with Novartis on a connected smart inhaler device for COPD patients. Qualcomm and Novartis also have a strategic collaboration in aggregating device data to optimize global clinical trials.