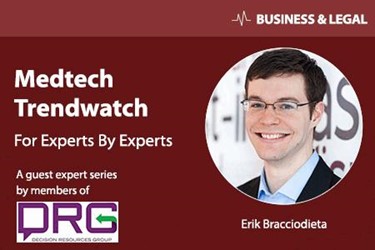 The cardiac rhythm management (CRM) device market — specifically, pacemakers — is widely seen as a declining market. Both United States and Japanese pacemaker unit sales and revenue have declined since 2010, but some competitors have fought this trend by introducing MRI-compatible devices. Medtronic was the first to do this in the U.S. and Japan, with regulatory approvals of a double-chamber pacemaker in 2011 and 2012, respectively. In the U.S., BIOTRONIK followed in 2014 with single- and dual-chamber MRI-compatible devices.

So, how much did MRI compatibility stave off decline in the dual-chamber pacemaker market? For the U.S., the analysis is broken down by competitor, and for Japan it compares standard and MRI-compatible devices.

Who Is Succeeding In The U.S. Pacemaker Market?

If we focus on the past five years of U.S. dual-chamber pacemaker sales, we see the market revenue decline and market shares change to reflect the demand for MRI compatibility. 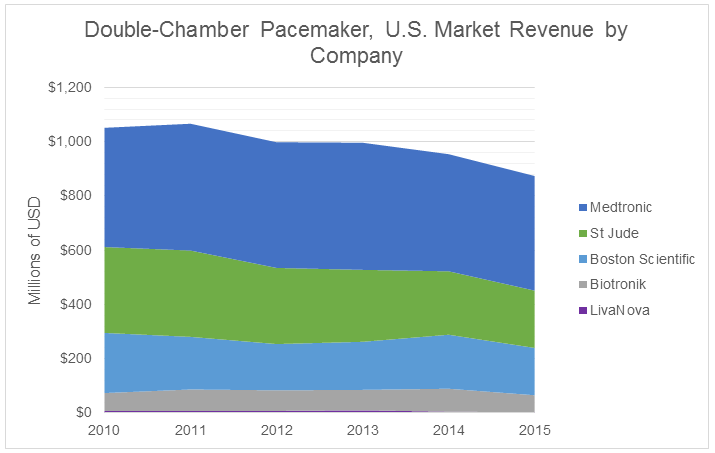 The word “innovation” is bandied about and has become cliché, but MRI compatibility certainly has had an impact as a new feature on a mature technology. It also has reaped benefits for Medtronic, whose revenue share has increased at the expense of St. Jude Medical. The latter has faced difficulty in bringing an MRI-compatible device to market in the U.S. (though one model is progressing in clinical trials), resulting in a revenue share decline that has become a common concern of analysts during quarterly earnings calls. 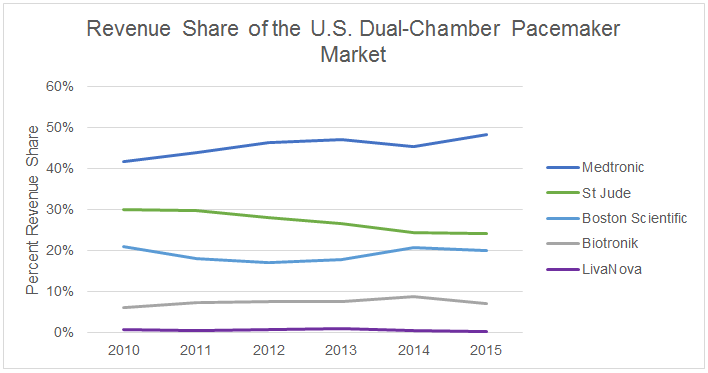 How Much Is MRI Compatibility Worth In The U.S. Market?

Is it possible to quantify the value of MRI compatibility for dual-chamber pacemakers, to put a dollar amount on this innovation? To build an alternate history where MRI-compatible devices do not exist, we need to assume 2010 market shares that hold constant through 2015, and that device prices decline faster then what happened in reality. With these assumptions in mind, we see a considerable revenue gap forming between the two realities for Medtronic and BIOTRONIK.

Medtronic was able to buoy revenue after 2010 with premium-priced, MRI-compatible devices until BIOTRONIK entered that market in 2014. Maintaining steady revenue in a declining market is welcome news for any product manager. The cumulative difference between historical reality (with MRI compatibility) and the alternate history (where this technology does not exist) is over $360 million. This amount is equivalent to more than 40 percent of the entire U.S. market value for dual-chamber pacemakers in 2015.

MRI compatibility has been a lifesaver for pacemaker manufactures in Japan. Biennial device reimbursement cuts hurt every company in this space, and the average cut for standard, dual-chamber pacemakers over the past three revisions has been 18 percent. This is one of the steepest price declines for a cardiovascular device I have seen in any country.

This price decline is understandable, though, given the government’s use of foreign prices to guide the Japanese price. The Japanese price for traditional dual-chamber pacemakers is about double the price found in other large developed countries, because these devices were in Japan before foreign prices were considered in the county’s price-setting equation (2002). That is, the Japanese government is now catching up to international prices with its steep biennial cuts.

In October 2012, Medtronic became the first to gain Japanese approval for a dual-chamber, MRI-compatible pacemaker. The device’s price was set at 1.3 times the foreign average price, which included a 5 percent price bonus for a few months due to the utility of MRI compatibility. Due to this acceptable foreign average price ratio, the price for MRI-compatible dual-chamber pacemakers declined by only 1 percent in the 2014 price revision, although any price cut was mitigated by a price increase to account for the increase in consumption tax that year. This also is seen in other CRM devices in Japan: The price for older technology experiences greater cuts than MRI-compatible ones.

These factors have led to a respite in market decline in Japan. Not only does the premium price of MRI-compatible devices help the market stay afloat, but the rapid adoption of these devices — occurring faster in Japan than in any other country — has resulted in market growth despite declining unit sales. Revenue growth is virtually unheard-of in established device markets in Japan. 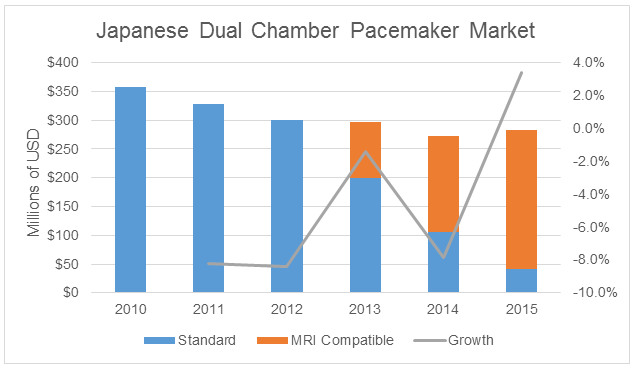 If we put our alternate history hats on again (referring back to the table above), we find that MRI compatibility for dual-chamber pacemakers has resulted in over $80 million in revenue between 2013 and 2015. This amount is equivalent to nearly one-third of the entire dual-chamber pacemaker market in Japan in 2015. 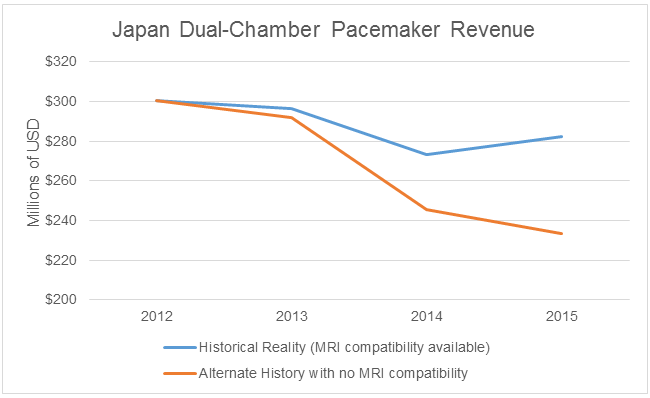 The moral of the story is that, even in mature device markets, innovation can change commonly held conceptions of a market’s destiny. Creating and understanding a theoretical alternate timeline helps to quantify the value of such innovation. This thinking can be used in other mature medtech markets, such as interventional cardiology stenting, neurovascular clips, large-joint orthopedic implants, and cardiac surgery tools.

The anticipation surrounding leadless pacemakers is an excellent case-in-point. These totally percutaneous devices will be able to command a premium price even greater than MRI-compatible devices, leading to market growth even as pacemaker unit sales decline in developed countries. In the U.S., FDA has met with representatives from Medtronic and St. Jude Medical to discuss how best to regulate leadless pacemakers; both Medtronic’s Micra and St. Jude’s Nanostim already are CE Marked in Europe, and Boston Scientific and Biotronik are developing similar devices.

Erik J. Bracciodieta is a Senior Analyst on the Medical Device Insights team at Decision Resources Group, where he authors Medtech 360 products for global cardiovascular device markets. Through this work, he has become DRG’s authority on CRM and electrophysiology mapping and ablation devices. Erik was also an author for DRG’s very first Global Market Access Solution Country Overview for Japan. Erik earned an M.Biotech. and an Honors B.Sc. from the University of Toronto.

*All graphs, tables, and images provided by Decision Resources Group.