How Rapid Manufacturing Can Help Medtech Serve An Aging Population

By Rob Bodor, VP and GM of the Americas, Proto Labs 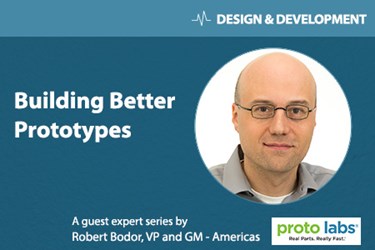 The ups and downs of the stock market, housing prices, and corporate profits may appear to control our lives. However, demographics — the ages, genders, and other characteristics of your family, the other 321 million people in the United States, and the rest of the planet’s 7 billion people — drive the long-term economy.

The aging population’s growth is perhaps the most powerful force shaping today’s economy, and the outlook for medical device companies, in particular. The bulk of baby boomers now are 70 or older, while the U.S. Census Bureau projects the 65-and-over U.S. population to double to nearly 84 million by 2050. The aging population will place increasing demands on the health care system for decades to come, especially as use of care and resulting expenses rise exponentially near the end of life. The challenge for medical device companies is to develop products and services that meet the needs of the aging population, in a cost-conscious manner, in the face of what has been referred to as an impending “demographic storm.”

As the storm intensifies, medical device companies will need to accelerate improvements to existing products and development of new medical devices for older patients, and to get those products to market quickly. The storm will increase demand for everything from prosthetics to drug delivery systems, disposable products to device enclosures, and even models of skulls and other body parts. Rapid manufacturing — injection molding, CNC machining, and additive manufacturing (3D printing) processes — will help companies do just that. These processes allow manufacturers the flexibility to produce parts from a variety of plastics and metals, using materials and processes similar to or the same as those used in making in the end product.

Medical companies face a higher risk developing new devices because of the expense and because of delays that can stretch from six months to two years if a product does not pass trials. That risk intensifies the value of device validation and the production process, early in the development cycle, which further supports the use of rapid manufacturing.

Developers will need to respond to the way older patients use their devices and to recognize them as a new user group. Implementing human-factors engineering into existing designs will help developers incorporate fresh ideas into products that are not necessarily new, just innovative iterations of their predecessors.

For example, with diabetes rising among the elderly, an insulin pump redesigned with larger buttons, dials, and other interface enhancements creates a better user experience for aging patients. Such handheld devices could be made easier to handle by adding a soft outer layer to their housings — like the plastic grips on many cordless drills and toothbrushes — through the rapid manufacturing process of overmolding. In addition to enhanced ergonomics, overmolding adds a non-slip surface, chemical resistance, and impact resistance to devices, among other benefits.

Pharmaceutical companies’ increasing use of in-house development for drug-delivery devices also represents an emerging opportunity for rapid manufacturers to aid OEMs in expanding innovation to serve the aging population and other patients. In-house delivery device development allows companies to control the entire customer experience, from the drug's quality and effectiveness to human factors engineering and user interface. Rapid manufacturers with the ability to iterate prototypes quickly and provide design assistance to manufacturers can offer value to companies taking this approach.

Much like demand for personalized meal options drove the trend of individually packaged food products (including shrink-wrapped single ears of sweet corn), disposable parts, such as syringes with needles, will play a much bigger role in devices and throughout the healthcare industry. Disposable parts typically make products easier to use and cheaper to produce, and make it easier to incorporate design variations for base units. Again, rapid manufacturers can generate prototypes early and assist manufacturers in designing products that can be produced quickly.

Companies also may have an extra incentive to invest in research and development (R&D) following the two-year suspension of the federal medical device tax, which Congress approved at the end of 2015. Both manufacturers and industry trade groups blamed the tax for reduced investment in reduced research and hiring. "With an aging population and growing incidences of chronic disease, now is the time for more -- not less -- resources to advance cures and treatments to help people live longer, healthier and more independent lives,” said former AdvaMed president and CEO Stephen J. Ubl last year, in calling for suspension or repeal of the tax.

Companies would be smart to reinvest the windfall, states industry analyst Brooks West of Piper Jaffray. "Politically, they better spend this money on R&D," West told National Public Radio, "or the government can look at this and say, you know, 'Look, if you just pass this on to the shareholders, we're going to reimpose the tax.' "

Thus, meeting the medical needs of the aging population, doing so in a cost-conscious fashion, and working under Washington’s watchful eye all combine to increase demand for iteration and innovation. That puts a premium on speed to market, and that's where rapid manufacturing and prototyping can save time and money.

Processes And Materials To Consider

More cost-effective plastics work for instrument housings and handheld device shells. Transparent plastics are an option that enables designers to observe fluid paths or a device's internal mechanics, often before moving to non-transparent plastic. To provide the light pipes, light-up keypads, display windows, or lenses that are critical to many devices, medtech companies can use injection-molded components made from engineering-grade thermoplastics, such as polycarbonate, or acrylic or optical liquid silicone.

Meanwhile, rapid manufacturing’s most-hyped process is 3D printing, new uses for which are found almost daily. Nobody is printing 3D hearts — yet — but rapid manufacturers hear the question often enough that it illustrates the hype surrounding the process. Medical companies have used industrial 3D printing, with parts shipped in one to seven days, to produce models of skulls for MRI scanning, intended to help prepare surgeons planning reconstructive surgery for patients who have suffered traumatic head injuries. Similar projects have printed bone structures to plan repairs or nasal flow models for fluid or air testing. 3D-printed components range from small parts with precise geometries to large, highly detailed patterns.

Others have used the 3D printing process of direct metal laser sintering (DMLS) to build titanium stems for hip replacements and knee replacement parts. DMLS also creates an intricate metal mesh that helps the bone accept the new implant part. End-use applications could increase as the relatively new DMLS process gains wider acceptance among medical companies. DMLS' ability to build a small number of parts quickly — from the same metal and with roughly the same properties as traditionally machined parts — could lead to a greater opportunity for DMLS implants in replacement hips or knees, where a patient typically needs only one or two custom parts.

Undoubtedly, meeting the medical needs of aging populations globally will be a challenge. But this trend also creates a significant opportunity for medtech companies to improve existing products, and to develop new products, to meet this challenge. Rapid manufacturing can be used to improve companies’ early prototypes, speed time-to-market, and cater to more specific patient populations as manufacturers strive to take advantage of this opportunity.

Rob Bodor is currently VP and GM of the Americas at Proto Labs, a leading online and technology-enabled quick-turn manufacturer of custom prototypes and low-volume production. At Proto Labs, he has also held roles as CTO and director of business development. Prior to joining Proto Labs, Bodor held leadership roles at Honeywell and McKinsey & Company, and has been on the executive team of two early-stage software companies in the Twin Cities. Robert holds B.S., M.S., and Ph.D. degrees in engineering and computer science.